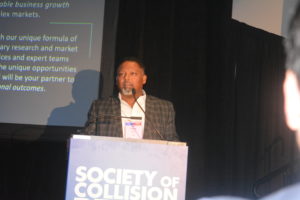 Advanced driver assistance system (ADAS) components that have not been properly calibrated as part of a repair may give customers no warning that anything is wrong until they fail to do their job, manufacturer representatives told an audience during an OEM Collision Repair Technology Summit at the 2021 SEMA Show.

This underscores the need for repairers to push to have insurers pay for all of the  steps the OEM says are necessary to make sure that the systems are operating as they’re designed to, said moderator Abey Abraham, managing director of Automotive and Materials for research firm Ducker.

Repeating an audience member’s question, “Are customers declining ADAS calibrations after mechanical repairs are out of warranty?”, Abraham responded, “I’m assuming you’re not claiming this on insurance. Bad idea. Not a good thing to do.”

According to LexisNexis Risk Solutions, the presence of at least one ADAS feature resulted in an 8-percent decrease in collision claims frequency. In fact, the Insurance Institute for Highway Safety says that police-reported crash data shows that crash avoidance technology could cut front-to-rear crashes in half.

During the Nov. 4 Summit, presented the Society of Collision Repair Specialists (SCRS), Scott Kaboos, national assistant manager of collision repair training and technology for American Honda Motor Co., offered the eye-opening results of a test done on a Honda Civic with an ADAS system calibration that was not properly done.

Kaboos noted that, according to Honda’s service information, calibrations must be done with the vehicle parked on a flat floor, which is defined as one with a slope of no more than 1 degree in any direction.

With calibrations done according to specification, Kaboos said the Civic’s automatic emergency braking worked as intended, halting the car three to four feet from a  target each time. “It did work, and it worked very well,” he said.

He and his team then conducted an experiment. They parked the Civic in their training center’s wash bay, where the floor is pitched at 1.5 degrees to provide drainage, and again calibrated the ADAS system.

The scan tool informed them that the procedure was complete, and there were no warning lights on the dashboard to indicate any kind of problem. But this time, when the car was driven at the same target, “we had very different results,” he said. “It honestly blew through that target at 20 mph like it wasn’t even there. No light on the dash, it didn’t beep at us, it just punted that target.” 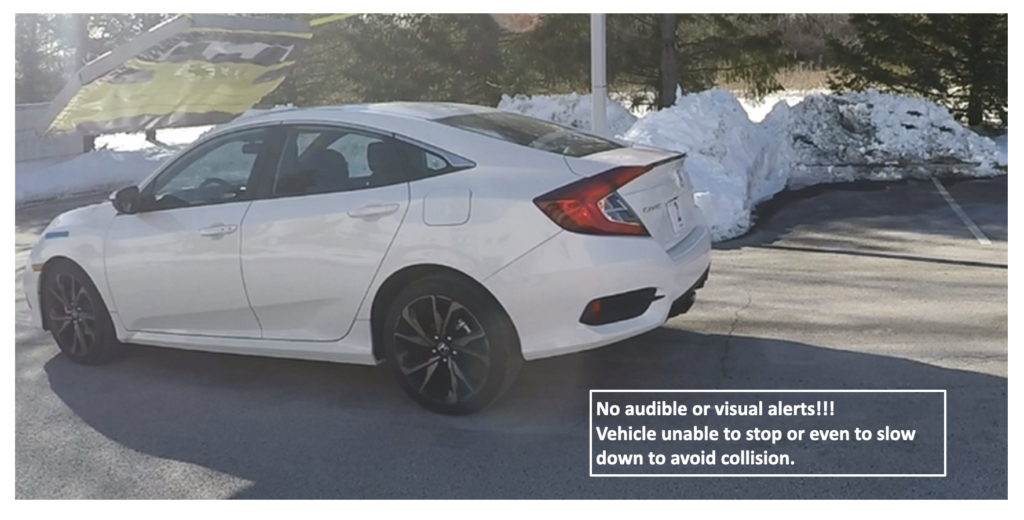 “That was a big eye opener to us on the training side, to how important that one little line in the service information was, to do this on a flat floor. So now we’ve been able to reach our shops and our collision certified shops that it’s very important that every step be followed,” Kaboos said. “Not just the shape of the floor, but the proper amount of air in the tires. Tank full of fuel. Anything that changes the ride height or the ride angle of the car is going to throw off all the geometry of where we place the target. So you’ve got to pay attention to all of that.”

Subaru specifies a maximum grade of about 2 percent for the calibration space. In addition, “You need a big area to do this in, and that’s a huge problem with dealerships and body shops all over the country, where are you going to park the car so that it’s dead flat level,” he said.

“It is possible — some of you may already know this — to move the target around until the camera is happy,” Hicks said, eliciting an “oh, yeah,” from the audience. “And that is the biggest single … danger that we face. Because if you do that, you’re subverting everything about that system, and you’re telling it that that’s forward,” he said, pointing up and to the left.

“We need to be very careful, please, about target placement,” Hicks said.

Kaboos noted that the costs of proper calibration are “not exorbitant,” and pointed out that, with one minor exception, all of the tools needed can be bought at a Honda parts counter.

The proper tools for calibrating a Subaru’s EyeSight twin-camera system are “extremely inexpensive,” added Hicks. He noted that the procedure can be done correctly using nothing more sophisticated than a string, a plumb bob and the proper target, “equipment that you could get at Ace Hardware.”

“I have looked at 4 or 5 different [tool] solutions out there on the floor, and they’re all wonderful. A little bit faster than a string and plumb bob,” he added.

Honda’s calibration technique is straightforward, too. “If you put the target in right spot and use the software to tell the camera to calibrate, there’s no reason it shouldn’t work,” Kaboos said.

“Where I get a little hesitant is when I see some manufacturers that are shrinking targets, moving them closer,” he added. “If that could be done successfully, then we would have done it. Because we don’t like that [the target has to be] six meters from the car, either.”

Frank Phillips, the manager of Rivian’s collision repair program, said the startup EV pickup manufacturer has worked with SnapOn to develop a calibration tool that will help to eliminate “environmental issues” in shops.

“We’ve really worked really hard to come up with ways to calibrate our vehicle that allowed it to be done in a collision center environment that exists today,” Phillips said. He said Rivian’s customers expect their ADAS systems “to work as they were designed to work.”

Taylor Jozwiak, Collision R&D Workshop manager for Rivian, summed up the conversation. “With these manufacturers up here, you’re getting a bunch of different answers, and I think this re-illustrates the point that you always need to refer back to the OEM documentation. That is your guiding light,” he said.

“Regardless of the manufacturer, please use that OEM’s recommendations when it comes to this kind of stuff to make sure you are doing a correct, accurate and ultimately safe repair,” Jozwiak said.

Calibrated on a floor with a slope exceeding the 1-degree limit, the automatic emergency braking system on this Honda Civic failed to operate. (Provided by Honda)