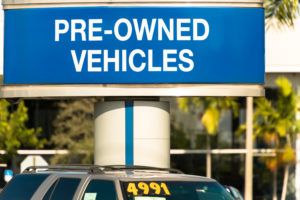 Title washing is when the true identities of vehicles are covered up with false documents to make a fraudulent title appear clean even though it was deemed a total loss by an insurance company. The four-member task force, made up of two House and two Senate members, was created by the legislature in 2021 to “evaluate issues related to salvage certificates of title and make any recommendations for legislative changes.”

Bill sponsor and task force member Rep. Cheryl Youakim (DFL-District 46B) told the Transportation Finance and Policy Committee that, “The core policy changes in the bill are to address title washing loopholes by requiring salvage or prior salvage brand on all vehicles that are acquired by an insurance company as a total loss or that incurs damage over 80% of the vehicle value threshold.”

Automotive Recyclers Association (ARA) Executive Director Sandy Blalock has repeatedly noted – during the Society of Collision Repair Specialists (SCRS) IDEAS Collide Showcase at the 2021 SEMA Show in November and again at the Collision Industry Conference (CIC) January meeting – that title washing is an epidemic in the U.S. despite it “being unethical and illegal.”

Insurance adjusters don’t count on their inspections alone to determine if a damaged vehicle is a total loss; that is if the cost to repair the vehicle exceeds its actual cash value (ACV), she and others in the industry have said. Instead, carriers use the total loss (TL) threshold – the percentage at which vehicles are deemed totaled by law, or the total loss formula (TLF). TL thresholds exist in 28 states, percentages of which vary, including Minnesota at 80%. In the other 22 states where thresholds aren’t legislated, the TLF is used, which is reached by adding the cost to repair and the actual salvage value together and comparing it to the ACV of the vehicle at the time of loss.

“Total loss does not mean end of life for all vehicles,” Blalock said. “The rebuilder industry is thriving at everyone’s expense. There will be fewer and fewer vehicles being repaired by professional repairers, not all total loss vehicles will find their way to a professional automotive recycler and meanwhile, a shift in supply and demand is affecting businesses of all types.”

The Minnesota bill seemingly aims to curb the issue Blalock brought up, especially since it amends current law to include the requirement of written disclosures for all damaged but roadworthy vehicles, rather than just late-models, of prior damage. It would “eliminate scenarios where a vehicle that is neither high value nor late-model can end up with a clear title,” Youakim said. For online sales, only a verbal disclosure would be required.

The definition of a salvage vehicle in the state would go from “a vehicle that has a salvage certificate of title” to a clearer definition: “…(1) for which an insurance company has declared a total loss or paid a total loss claim, or (2) that has been involved in a collision or other event in which the cost of repairs exceeds 80 percent of the value of the vehicle immediately before the damage occurred.”

Salvage titles wouldn’t, however, be required for vehicles that are recovered after being stolen even if they had been deemed a total loss.

“We were looking for a way to help consumers, especially those that were buying lower-priced vehicles; to make sure that they had full disclosure on the damage to their vehicles,” said task force member Rep. John Petersburg (R-District: 24A). “We wanted to get away from places in which there was damage to a vehicle and unsuspecting buyers buy it and then it became unusable later.”

Ron Elwood with Mid-Minnesota Legal Aid called the bill “an important and long incoming advancement in transparency and consumer protection” during testimony at the meeting.

Minnesota Department of Public Safety Driver and Vehicle Services Director Pong Xiong also testified in support of the bill. “DVS is very confident that the proposal here will create the transparency needed in titling and branding….”