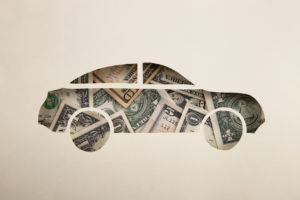 When it comes to insurance claims, policyholders are often met with a “take it or leave it” approach from insurers on valuations of their vehicles and the damage to them, but appraisal experts say repairers can step in to help.

After a collision, Denver7 reported consumers may find out their older cars are worth more because of the skyrocketing value of used cars right now. That’s just one example of why insurers might total a vehicle instead of repairing it.

“As the used car market has increased, that’s obviously a bigger pool of funds to repair the vehicles,” said Steve Krieps, a public adjuster with Collision Safety Consultants of WV. In the past two years, he said it’s been a “huge issue” because, due to higher salvage values, insurers want to total a car under a total loss threshold or by using the incorrect values. “But yet, if you use the new value and the total loss threshold then the car was actually repairable.”

ZB Claim Services, Inc. Client Services President John Walczuk said during a 2021 SEMA Show class in November that even if a car ends up deemed a total loss, shops can help guide insureds through the process resulting in them likely coming back for repairs the next time they need them because of the trust built in the shop. 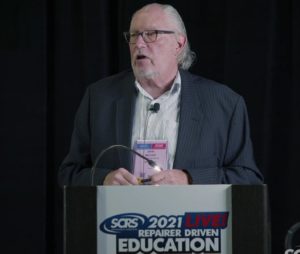 “Your job is to basically stop that person from signing the title on day one and to at least seek some counsel relevant to the value,” he said. “If you help a customer to get more money – you’re there to coach them through a situation – more than likely they’ll come back to you in the future. They get a dent in their car, they’re not going to go to the guy down the street. They’re going to come to you.”

Shops can also help potential future customers by referring them to Walczuk or other professionals that can review valuation reports and determine if they’re owed more money by their insurer, or if there’s a way to challenge a total loss determination. One way for consumers to do that, which could result in their vehicle remaining repairable, is to invoke the appraisal clause. Every state doesn’t require insurers to have the clause in their policies, and those that do, don’t all have the same total loss thresholds. In some states, carriers have attempted to remove the appraisal clause from their policy – a move that could make it more difficult for consumers to challenge ineffective settlements on repairs or compromise repair quality, Walczuk said. Other states, such as with recent legislation in South Carolina and Washington, are looking to require the appraisal clause as an option for their constituents.

During a class at SEMA 2021, Auto Claim Specialists Managing Director Robert McDorman said there are only two ways cars can be deemed a total loss.

The total loss formula is calculated by using “the salvage value plus the repair cost [and if it’s] greater than the actual cash value then they have the right to deem the vehicle a total loss,” he said. In states where a total loss threshold is mandated, that’s used instead of the TLF, according to McDorman.

However, some insurance policies hold companies to pay out the ACV, and consumers can invoke the appraisal cause to get a third party to challenge vehicle valuations that don’t align with comparable replacement vehicles they’re finding in the marketplace. 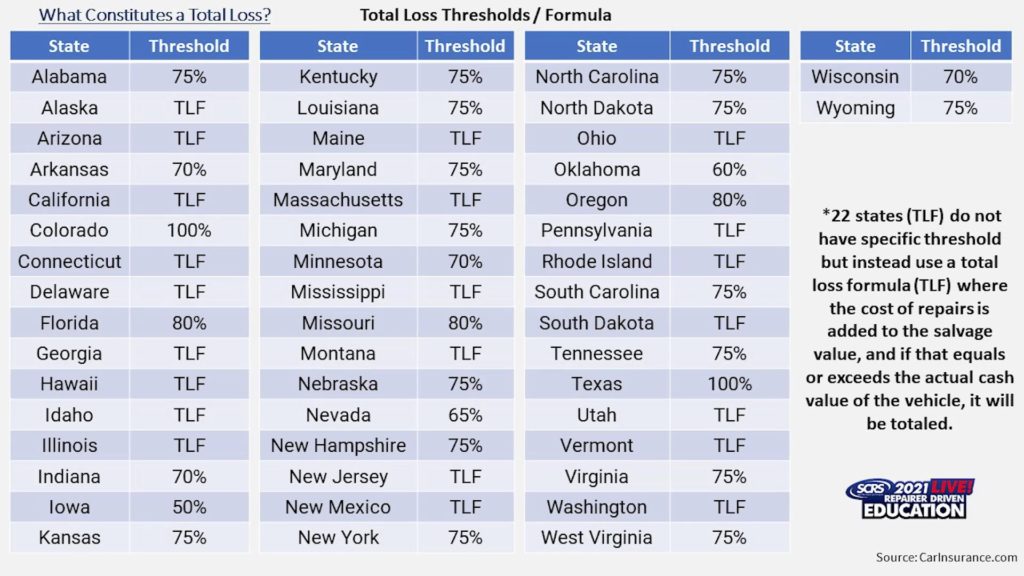 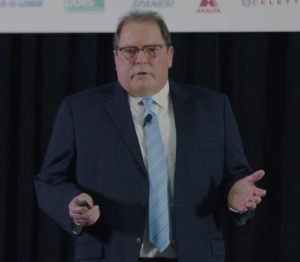 “The carriers will send out their estimator,” he said. “They’ll write an estimate then you have little or no recourse to combat that once they dig their heels in and say, ‘This is all we’re going to pay.'”

Low valuations often lead to total losses on vehicles that could’ve been fixed. Insurers will total vehicles with the reasoning that salvage values are high, he said.

He added that the “fence post” of the claim is the actual cash value, but insurance policies dictate what happens; some of which say the companies can total vehicles for whatever amount they determine. Ultimately, the insurer’s obligation is to make the consumer whole. Shops and policyholders should always make sure insurers are following their own policies, McDorman said. 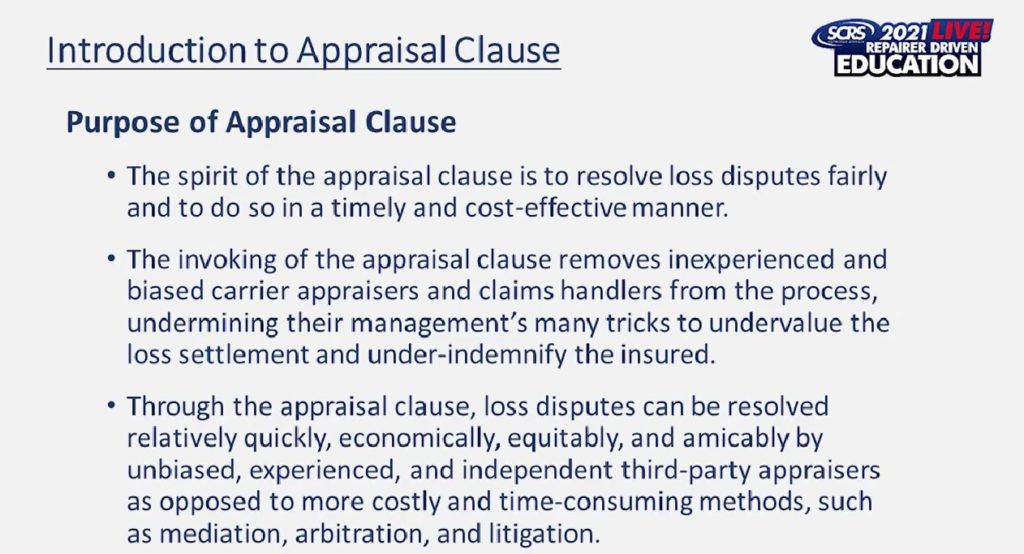 “Transparency is what’s going to fix this problem. Without transparency and without [consumers] fighting, standing up for [their] rights, it’s just going to get worse.”

Krieps said he’s seen claims where wrecked vehicles thought to be possible total losses after an initial look were taken straight to a salvage yard, sometimes without the owner’s consent.

“The damage appraisals that are coming out of those situations are low enough to where it’s coming back out of salvage as repairable and then once it hits a shop, now all of sudden it goes back into the total loss threshold,” he said.

“The right to appraisal has become a consumer’s only option in some cases and litigation can be costly and time-consuming,” Krieps said. “Many states are now realizing that the appraisal provision can help remove cases from the courts that could be handled by the appraisal process. At the same time, a lot of insurers seem to be racing to remove this provision which would leave consumers with a take it or leave it policy.”

It’s important for owners to get their valuation reports from their insurers to look at the numbers firsthand because insurers like to hide behind estimating systems and evaluation services when there’s a total loss, Walczuk said. He complained that the samples used by estimating systems are, at a minimum, 90 days old and are rarely comparable to the vehicle in question, which could make it challenging for a consumer to find a replacement vehicle for the offered valuation. If the valuation report doesn’t make sense, companies like Walczuk’s will become the power of attorney and pursue the insurance company.

Insurance companies putting valuations on vehicles at much lower amounts than their current ACVs has been a problem for quite some time, according to Krieps.

“It’s being used almost as a tool to lower claims payout,” he said. “At least that’s how it appears. …Right now, with salvage values being up, if they’re able to total a car for a lower value and then recoup more on the salvage side … then obviously that’s a huge benefit to a carrier; not so much to an insured.”