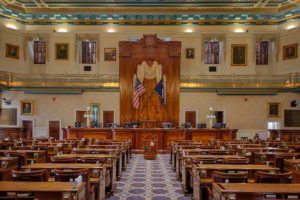 The act would amend current law to add several new requirements, but four are relevant to the collision repair industry. Those are the requirement of insurers to provide a third-party appraisal, to allow policyholders to choose where they take their vehicles for repairs and what rental car company they use, the prevention of collusion between insurers and vendors and requiring repairers to follow OEM repair procedures.

A similar bill regarding the appraisal clause has also been introduced in the Washington House and Oregon already has a law on the issue in place.

McDaniel said her district is mostly rural so she signed on as a co-sponsor of the bill because she believes it will have a positive impact on small businesses in rural communities.

“Most of the insurance companies have agreements with a lot of the franchises, larger repair companies and automotive repair shops and a lot of our small rural shops are left out,” she said.

Insurers would be required to use South Carolina-owned vendors for at least 50% of its covered services.

Using third-party appraisals to establish the actual cash value of vehicles won’t leave any room for negotiation on how much insurers will pay out and will prevent insurers from getting money back for claims, according to McDaniel.

“If that’s happening, I’m totally against that because once that claim is filed and the insurance company has stated what it will pay – and in this case it would be based on appraised value – then there should not be any room for them to get any other money as a result of that claim,” she said.

The act would also prohibit collusion between insurers and vendors to force policyholders to go to certain shops or rental car companies or for insurers and companies to have pre-negotiated price agreements that must be met for a shop to do claims repair work for the insurer.

Carolina’s Collision Association (CCA) President Kyle Bradshaw told RDN the association supports the bill and that it’s a win-win for consumers and repairers.

“Right now, there’s no means of disputing what a carrier says when it comes to repairs so basically if you’ve got insurance in South Carolina and your policy doesn’t have an appraisal provision in it then whatever your carrier says you either have to make the decision on I can pay the difference or ultimately make the decision to file litigation against your insurance,” Bradshaw said. “The appraisal provision provides a dispute mechanism without having to go the litigation route.”

“We want vehicles repaired properly and we want to put consumers in safe vehicles,” Bradshaw said. “We believe the way that the OEM says to repair the vehicle is the way to fix a vehicle. Sometimes [with] carriers that doesn’t necessarily align with what their values are.”

After introduction, the bill was referred to the House Committee on Labor, Commerce and Industry on Jan. 20.