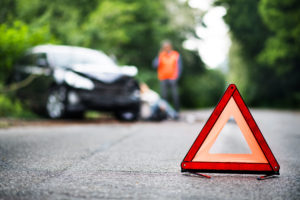 Calling the status quo “unacceptable,” U.S. Secretary of Transportation Pete Buttigieg last week unveiled the DOT’s new safety plan to decrease the number of roadway deaths that will be implemented over the next three years. Though he said it might not happen while he’s still at the helm, the goal is to reach zero deaths.

He noted in a letter that accompanies the plan that nearly 95% of U.S. transportation deaths occur on streets, roads and highways. Buttigieg cited National Highway Traffic Safety Administration (NHTSA) data that found an estimated 38,680 people died in motor vehicle crashes in 2020 and in the first half of 2021 an estimated 20,160 people died. That’s an 18.4% increase compared to the first six months of 2020 and is the largest number of projected fatalities for January through June since 2006.

“Zero is the only acceptable number of deaths and serious injuries on our roadways,” Buttigieg wrote.

The goal of zero deaths and serious injuries should hit home with collision businesses, responsible for restoring key safety features as part of the repair process. It’s also a benchmark that is worth noting during this legislative season when there are bills proposed, such as in South Carolina and Illinois, that seek to establish the precedence of following the OEM procedure as the standard of care. Historically, the insurance industry has pushed back against such legislation promoting OEM procedures.

For example, Allstate lobbyist Bruce Spencer said in 2019 that while the story of Matthew and Marcia Seebachan was a “horrific case,” such instances didn’t happen frequently enough to merit a bill requiring shops and insurers to follow OEM repair procedures. The Seebachans were seriously injured during a crash in their used Honda Fit that they didn’t know had been repaired before they owned it.

Experts for the plaintiffs in Seebachan v. John Eagle Collision said in Texas court documents that the severity of the crash and the Seebachans’ injuries were the result of the body shop adhesive-bonding the Fit’s roof during a $8,500 hail repair in 2012 for the prior owner of the vehicle. Honda OEM repair procedures demand the roof be welded.

During a Jan. 27 press conference Buttigieg said nearly everyone can think of someone they knew that lost their life in a vehicle crash it’s thought of as normal. More than 350,000 people have died in the last decade on U.S. roadways, he said.

“Things have gotten worse during recent years as people drove at higher speeds or recklessly, more distracted. We’re going to be posting, as a department, our official fatality data for the third quarter of 2021 and I need to tell you – looking at the preliminary numbers – it’s not good. This is a national crisis. … We cannot and must not accept that these fatalities are somehow an inevitable part of life in America.”

Buttigieg believes that curbing roadway deaths must be a coordinated effort with stakeholders across the public and private sectors, advocacy groups and research communities.

“It will take a sustained, urgent, yet lasting commitment from the people who build and manage our roads, construct our motor vehicles, and use vehicles as part of their businesses to support actions that protect people and prevent harm,” he wrote, adding that the public also has a role to play by prioritizing safety.

In conjunction with the NRSS, the DOT will start a call to action campaign for stakeholders to commit to specific actions to “significantly advance safety.” The department calls the recent passage of the bipartisan Infrastructure Investment and Jobs Act a “generational investment” in America’s transportation network and notes that it supports the funding as well as program and policy provisions of the NRSS.

According to the plan, Black, American Indian and Alaska Native people as well as females, teenagers and those living in rural areas and in counties with high poverty rates are killed in traffic crashes. 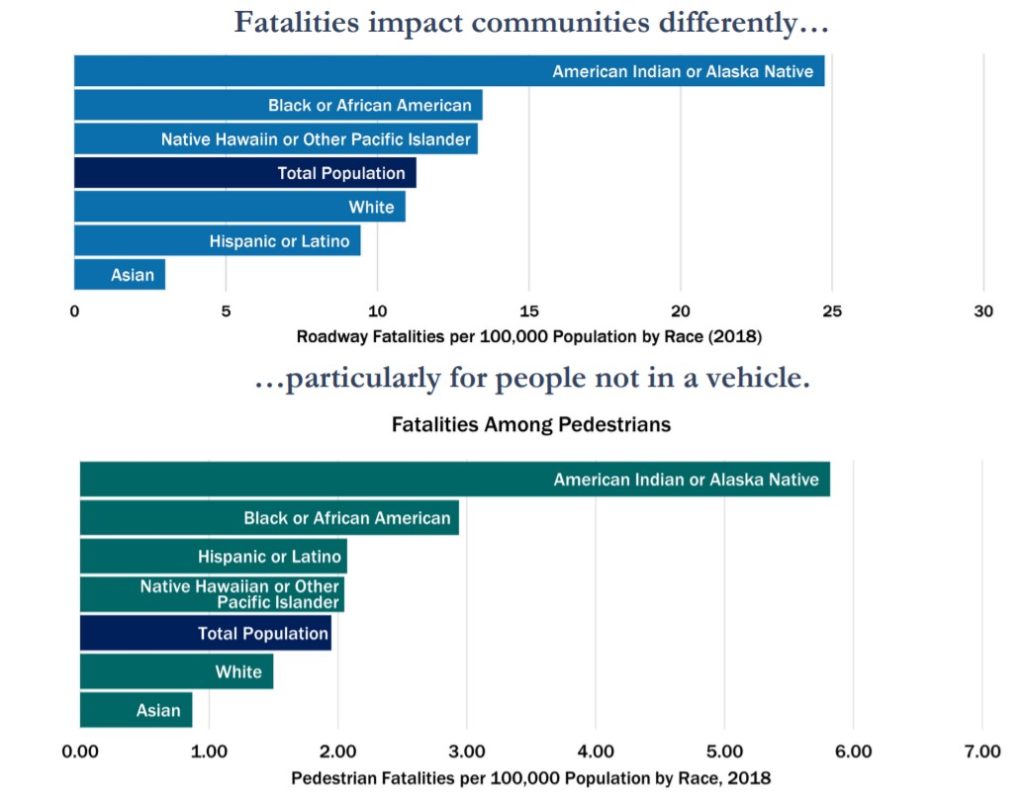 To address the disparities, the DOT wants “consistent, fair, just, and impartial treatment of all people” by law enforcement. The NRSS states the department will “advance equity as an instrumental component of transportation safety and convene key stakeholders – government at all levels, law enforcement, advocacy, community organizations, and the general public – to develop both a better understanding of the intersection of equity and roadway safety, and a comprehensive approach to incorporating equity into all of the Department’s efforts to achieve zero roadway fatalities and serious injuries.”

To promote safe driving, the DOT wants to work with states and other stakeholders to educate and enforce against distracted, impaired and fatigued driving as well as driving without a seat belt. Part of doing so is knowing the demographics of motorists for educational purposes like knowing, for example, that there are more young or elderly drivers, can inform what efforts are implemented, according to the NRSS. 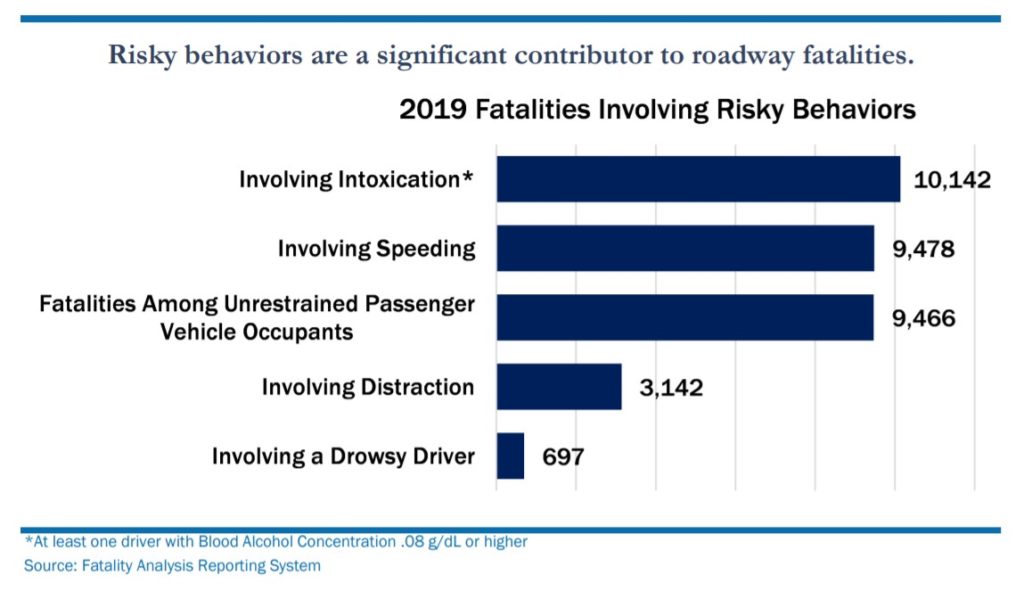 The DOT plans to use new funding available through the Infrastructure Investment and Jobs Act for behavioral research and interventions. It will also take licensing action against commercial drivers who have drugs or alcohol violations in the system and are not cleared to return to duty and develop systems for the electronic exchange of driver history record information to take all unsafe drivers off the road “more expeditiously.”

To make roads safer, the DOT will finalize changes to the Manual on Uniform Traffic Control Devices and update it every four years. The manual defines nationwide standards for the installation and maintenance of traffic control devices on all public streets, highways, bikeways and private roads open to public travel. 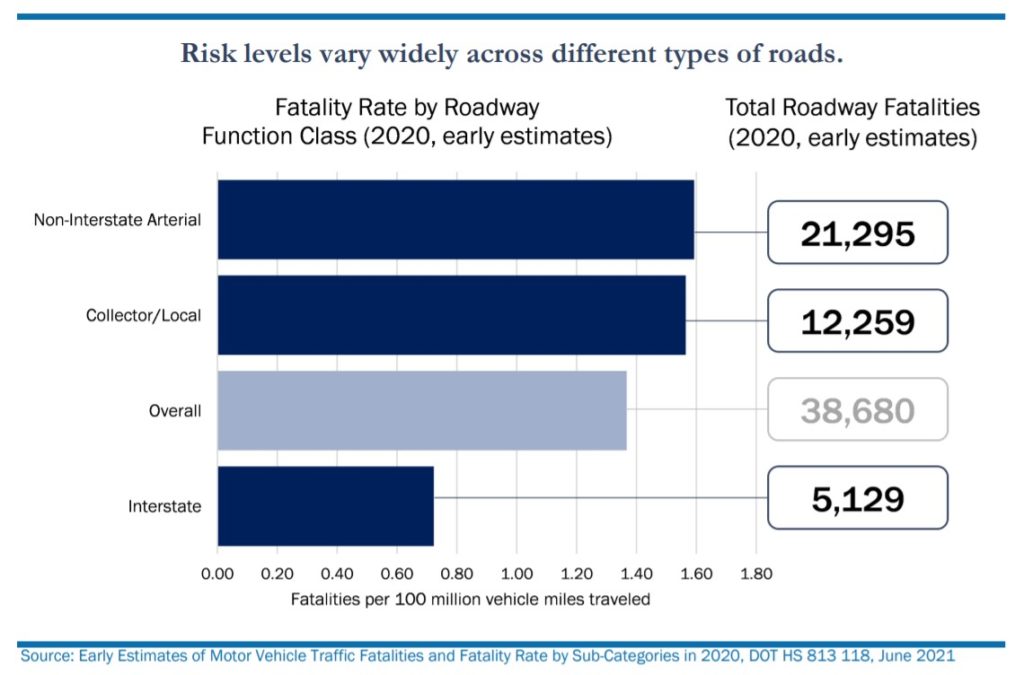 The DOT will also support the planning, design and implementation of safer roads and streets in all communities using all available and applicable federal funding resources and provide assistance to implement safety-prioritized policies in transportation network planning, design, construction, and operations, including in small towns and rural areas.

Safer vehicles means improving and expanding the availability of advanced driver assistance system (ADAS) technologies that have prevented or mitigated crash impacts such as automatic emergency braking and lane departure warning, according to the NRSS. The DOT plans to incentivize the use of commercial vehicle safety equipment like rear underride guards, alcohol detection systems and distracted driving detection systems and seeks to make transit bus travel safer. 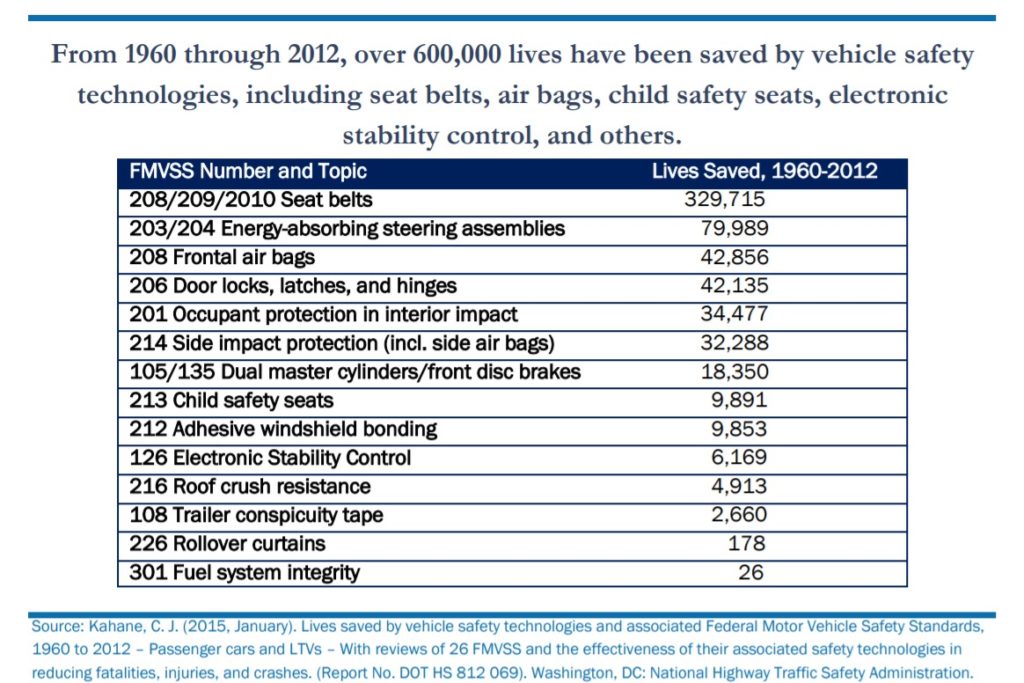 “We’re going to count on technology and auto companies to work with us to make driving safer for those inside and outside the car, but it’s also clear that technology alone will not save us – certainly not on any acceptable timeline,” Buttigieg said.

DOT will set performance standards and provide safety oversight and will investigate issues, initiate recalls, and remedy vehicle defects. It will also create a public database of information that can “inform safer passenger vehicles,” according to the NRSS.

The DOT plans to initiate the following requirements to make vehicles safer:

In a Jan. 28 statement in response to the DOT’s NRSS, the American Property Casualty Insurance Association (APCIA) said it “supports improvements in Advanced Driver-Assistance Systems technology already being adopted by auto manufacturers seeking to meet consumer demand for safer vehicles.” They also noted that “these improvements are a critical component of comprehensive safety measures integrating driver experience and road conditions.” These sentiments may prove valuable in both legislative discourse, and on the shop floor in conversations about necessary operations to restore vehicle safety.

Speeding has played a role in more than a quarter of traffic deaths that have killed nearly 100,000 people in the last decade, according to NHTSA data cited in the NRSS. 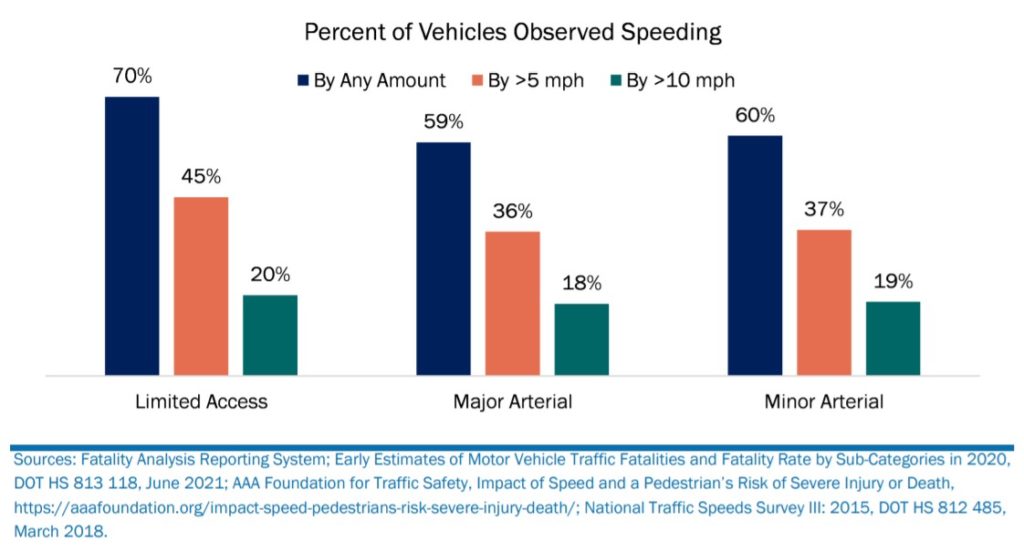 To curb deaths and serious injuries related to speeding, the department plans to improve and develop information available to set speed limits based on the type of roadway, provide practices for re-engineering roads to slow down vehicles, promote the use of speed safety cameras and make funds available to communities to study and pilot automated or enforcement strategies focused on speeding.

The DOT plans to help improve emergency response by providing first responder training on how to safely manage the scene of a crash and provide a safe environment for all involved, including passerby. The department believes it is crucial to clear scenes quickly for the sake of safety as up to 20% of crashes are estimated to be secondary in nature, meaning that they occur as the result of an earlier incident. The DOT estimates that the likelihood of a secondary crash occurring increases by 2.8% for every minute the primary crash obstructs a travel lane or poses another type of hazard, according to the NRSS. 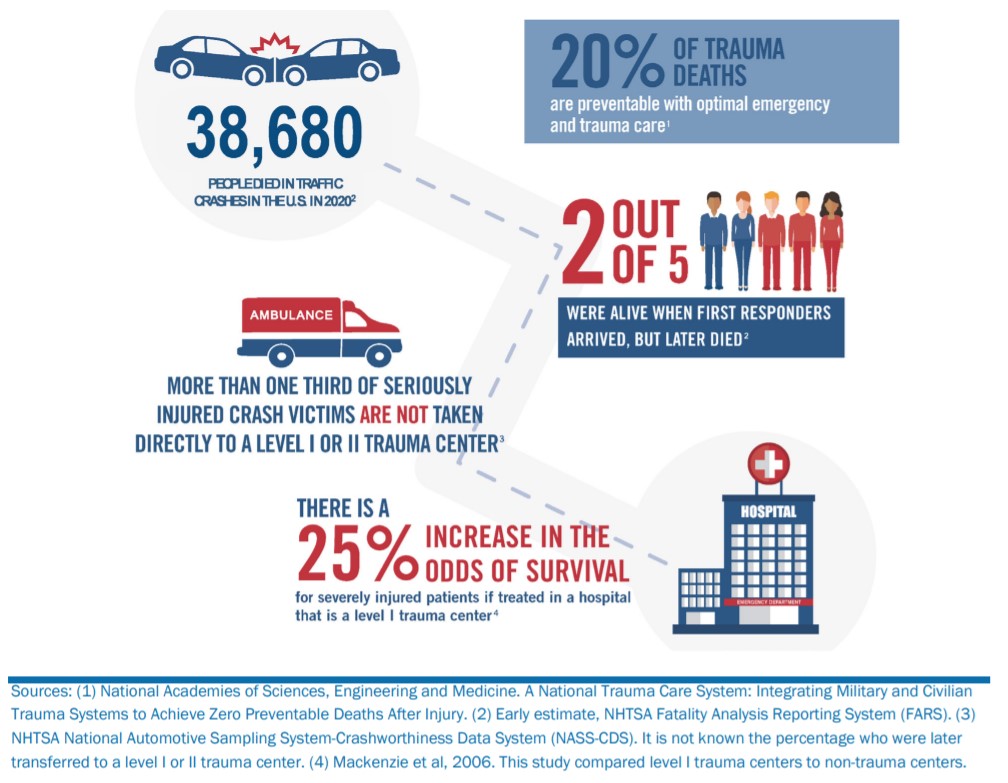 The department plans to prioritize shortening ambulance response times and improving the quality of EMS data.

The Governors Highway Safety Association (GHSA) and the Commercial Vehicle Safety Alliance (CVSA) have praised the NRSS and pledged their support of it in written statements.

“The membership of the Commercial Vehicle Safety Alliance (CVSA) is comprised of commercial motor vehicle safety inspectors and officials and motor carrier industry representatives who are dedicated to transportation safety,” said CVSA Executive Director Collin Mooney, in a written statement. “Our membership is committed to supporting the U.S. DOT in its commitment to zero fatalities on our roadways through the implementation of identified safety priorities and the Safe System approach.”

The GHSA’s wrote that its recent report, “Putting the Pieces Together: Addressing the Role of Behavioral Safety in the Safe System Approach,” goes hand-in-hand with the NRSS to debunk the belief that “infrastructure alone can end road deaths and behavioral safety plays no role in keeping road users safe.”

“We strongly agree that the United States needs a culture shift when it comes to roadway deaths – no motor vehicle fatality is acceptable,” the GHSA wrote. “The entire traffic safety community must work together, not in silos, to make progress in achieving our shared goal of zero traffic deaths. GHSA looks forward to working with the U.S. DOT, the Biden administration, and our traffic safety partners to ensure that all roadway users arrive safely at their destination.”