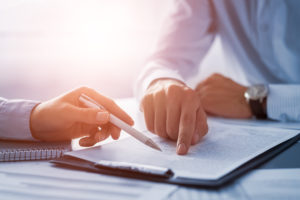 A recent North Carolina collision center’s complaint to the state’s Department of Insurance resulted in forcing the insurance carrier to agree with an independent appraiser’s repair estimate.

Kyle Bradshaw, with K&M Collision in Hickory, filed a complaint to the DOI via email in February after finding out from the independent appraiser, John DiBella, that The General insurance company disputed his estimate and amended it under his license number before sending it on to K&M.

“What has been happening is the insurer will hire an independent appraiser; the independent appraiser will come out, inspect the vehicle, go over the repairs and submit their report to the carrier, and then what’s happening is the carrier’s been doing an internal audit or an internal review based on their ‘guidelines’ and is then reducing what the independent appraiser’s written,” Bradshaw said. “Oftentimes, it could be 40 or 50%. It’s becoming more and more popular. The majority of carriers that have started to eliminate their staff [adjusters] it’s becoming more prevalent in.”

At the same time that Bradshaw filed a complaint with the DOI, he disputed The General’s actions directly with the carrier to Material Damage Specialist Lori Finn.

“I have reached out to the appraiser that physically inspected the vehicle and he stated that he did not create this negative supplement and his figure was for $11,361.37…,” Bradshaw wrote in an email. “I would certainly hope that you are aware that in accordance with North Carolina Administrative Code every licensed motor vehicle damage appraiser is required to prepare an independent appraisal of the damages. It is abundantly clear in speaking with Mr. Dibella that someone at The General received Mr. DiBella’s appraisal back and had an issue with it and altered it under Mr. DiBella’s name. Can you or anyone at the general explain to me the purpose for hiring an independent appraiser if you plan to manipulate his appraisal after the fact?”

K&M requested a physical inspection of the damaged vehicle after The General issued an estimate based on photos of the damage. The General then hired Auto Damage Appraisers to complete an independent appraisal, which was for $11,361.37, according to Bradshaw. A licensed internal appraiser for The General “found numerous charges that were in question,” according to a response from the carrier to the DOI.

Auto Damage Appraisers’ COO “reviewed the information and adjusted the estimate. Once received, it was approved and released to the shop. The payment for the repairs was issued to [redacted] for $7,063.89,” wrote The General Claims Compliance Advisor Hannah Bunch.

The General’s estimate was for $1,754.11, according to Bunch. “The appraiser indicated on the estimate that the initial estimate was written for the visible damage and that there was hidden damage with a possible large supplement expected.”

An Auto Damage Appraisers supervisor told K&M “that invoice or photo documentation was needed for the following: paint mixing for match, scanning of the vehicle for diagnostic codes, and any required additional steps needed during the diagnostic process. The supervisor also discussed the non-customer charges, which included washing of the vehicle, looking up OEM procedures, battery tending labor, and support functions,” according to Bunch’s response to the DOI.

Ultimately, after coming to an impasse with The General and while waiting on DOI’s response, K&M recommended to its customer that they file a claim under their carrier to move forward with repairs sooner, which she did.

NC DOI P&C Complaint Analyst Adrienne Clark wrote in an email to Bradshaw, “For your records, our Department did advise the General that our expectation was for the original appraisal performed by John Di Bella, to be honored. However, Ms. [redacted] has elected to have her own insurance carrier handle this claim.”

Bradshaw said this claim shows the importance of filing complaints with departments of insurance for consumer protection. “It can be used as a benefit to the customer in certain scenarios. If you just let stuff go, you’re not really holding up your end of the bargain as a repair professional. If you know that something’s blatantly wrong, you’ve got to get that out there.”

NC DOI Assistant Director of Public Affairs Barry Smith told Repairer Driven News the department has no comment on the complaint. When asked if the issue addressed happens often, he said, “We do not code our complaints to identify the specific issue referenced in the complaint. So we are unable to determine how many similar complaints we have. However, we do not see this type of complaint as a recurring issue. It’s important for collision centers to know that their customers can file a complaint with the N.C. Department of Insurance if they have an issue with an insurance company.”

Complaints with the DOI can be filed on the department’s website or a form can be downloaded to mail in.

The department states on its complaint webpage that it can: