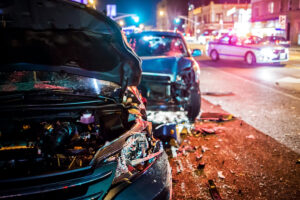 A recent study found that drivers and passengers who have been involved in major motor vehicle crashes would like to have more safety features in their vehicles and emotional support immediately after a collision.

RoadSafetyUAE, a road safety improvement initiative, partnered with OnStar to study the psychological impact of car accidents on those involved, with the goal of the research being “to understand and therefore better address the emotional state and requirements of drivers in their time of need.” Although the study was done in the United Arab Emirates (UAE), it still sheds some light on the mental and emotional effects of those involved in vehicle crashes regardless of location.

Forty-six UAE-based respondents who had been involved in an “emergency on-road incident” were asked about their emotional response after the incidents and their perceptions of driving and existing safety features, including if they thought connected cars would ease their driving anxieties. Connected cars have services, such as those offered by OnStar, that offer immediate connection with emergency services and can relay where the vehicle is located. Most of the respondents were the drivers during the incidents, but some were passengers.

Initial responses of fear, anxiety, and shock were the most prominent emotions respondents said they felt after their crashes, and those who were traveling with others, especially family, reported more concern for the well-being of their passengers as their initial thought, according to RoadSafetyUAE. First actions included calling emergency responders or family members, but one in every five respondents said they were in shock and couldn’t make a decision on what to do. Others said they were either unconscious or physically not able to call for help and some couldn’t remember much from the first minutes after the crash.

The World Health Organization (WHO) reported in June 2021 that 20 million-50 million people suffer non-fatal injuries from traffic crashes with many leading to a disability. And every year, 1.3 million people are killed worldwide in traffic crashes, according to WHO. WHO called on governments “to take action to address road safety in a holistic manner.”

“This requires involvement from multiple sectors such as transport, police, health, education, and actions that address the safety of roads, vehicles, and road users,” WHO states on its website. “Effective interventions include designing safer infrastructure and incorporating road safety features into land-use and transport planning, improving the safety features of vehicles, improving post-crash care for victims of road crashes, setting and enforcing laws relating to key risks, and raising public awareness.”

In January, U.S. Secretary of Transportation Pete Buttigieg called the status quo “unacceptable” when he unveiled the Department of Transportation’s new safety plan that will be implemented over the next three years to decrease the number of roadway deaths. The ultimate goal, he said, is to reach zero deaths.

Road traffic injuries cause considerable economic losses to individuals, their families, and to nations as a whole. These losses arise from the cost of treatment as well as lost productivity for those killed or disabled by their injuries, and for family members who need to take time off work or school to care for the injured. Road traffic crashes cost most countries 3% of their gross domestic product.

“I was panicking and didn’t know what happened so suddenly, so I was just shaking,” one respondent said.

Respondents were also asked about OnStar’s Automatic Crash Response, which automatically alerts advisors when sensors in vehicles pick up that there’s been a crash and the airbags have deployed. Two out of every three respondents said they would prefer receiving emotional help from OnStar advisors to help calm them down over getting connected to medical assistance. “I think human interaction would have been very helpful since I was really scared,” said one respondent.

“While bystanders were able to offer practical care, respondents did not feel comforted until trained professionals were able to offer emotional support to calm and reassure the victims of the car accident,” RoadSafetyUAE states. “17 of the accident victims interviewed also reported wanting to speak to a friend, spouse or family member for reassurance and emotional support in the immediate aftermath.”

However, 27 respondents sought professional medical support for reassurance and to provide the necessary aid during the emergency.

“The safety of our customers sits at the heart of everything we do, and this goes above and beyond their physical safety and into their psychological wellbeing too,” Gary West, OnStar and Future Mobility General Motors Africa and Middle East managing director, said in a statement. “We believe that the future of transportation is underpinned by the Connected Car and in-vehicle safety and security services such as OnStar. Built directly into your vehicle, OnStar is able to support drivers, both in the everyday and in emergency situations. With the results from this research, we will be able to support our members by understanding the state of their psyche and providing support until Emergency Responders arrive on scene.”

When asked to share their thoughts on the safety features that were available in their vehicles, one in three respondents said they felt either extremely satisfied or satisfied with the features and specifically named rear and front sensors, airbags, automated braking system (AEB), and a durable car exterior. There was interest, however, in more features that could prevent accidents and an automatic step-by-step guide on what to do after an accident as well as a feature that could immediately contact emergency services for help.

“We wanted to understand the experience of accident victims right after the incident, including their accident-related predominant emotions and needs at the time, as well as how they evaluated the support that they received,” said Thomas Edelmann, founder and managing director of RoadSafetyUAE, in a statement. “We also wanted to understand their reactions to the concepts of connected cars and human/live advisor support in emergency situations, alongside what ‘vehicle safety’ in general means to them to identify the main fears they face on the roads after their accidents. These insights will better enable us to understand what kind of precautions they take in order to feel safe while driving. We are grateful for the OnStar Team’s committed support to conduct this unique research project and now we are happy to share the results.”