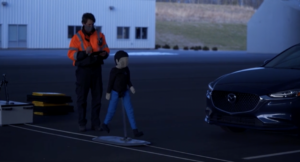 The Insurance Institute for Highway Safety (IIHS) and the Highway Loss Data Institute (HLDI) have petitioned federal regulators to require through rulemaking that passenger vehicles be equipped with pedestrian automatic emergency braking (PAEB) that works well in the dark.

The National Highway Traffic Safety Administration (NHTSA) has already been directed by the Department of Transportation to initiate rulemaking on a requirement that new passenger vehicles be equipped with PAEB by 2024. IIHS and HLDI are going a step beyond, petitioning NHTSA to require PAEB that is effective in all light conditions.

While promising a welcome increase in pedestrian safety, the rulemaking sought by IIHS could possibly further increase the complexity of collision repair.

More than a third of fatal pedestrian crashes occur at night on unlit roads, IIHS and HLDI said.

The agencies noted that NHTSA has announced that it intends to add PAEB to the advanced driver assistance system (ADAS) technologies recommended under the agency’s New Car Assessment Program (NCAP). “While IIHS and HLDI support adding nighttime testing to NCAP, we believe good performance in the dark should be mandated and not merely recommended through NCAP,” the letter states.

In the letter, IIHS and HLDI detail their evidence showing the effectiveness of PAEB at preventing pedestrian crashes.

In that analysis, insurance claims filed under bodily injury liability coverage, which covers injury to third parties, without associated first- or third-party damage claims, were used as a surrogate measure for pedestrian injury crashes.

“We found that PAEB was associated with a statistically significant 35% reduction in the frequency of pedestrian-related claims,” IIHS and HLDI said. Two other studies “similarly reported that PAEB reduced single-vehicle pedestrian crash risk when comparing equipped and unequipped GM and Toyota vehicles by 14% and 16%, respectively, although these effects were not statistically significant,” the agencies reported. 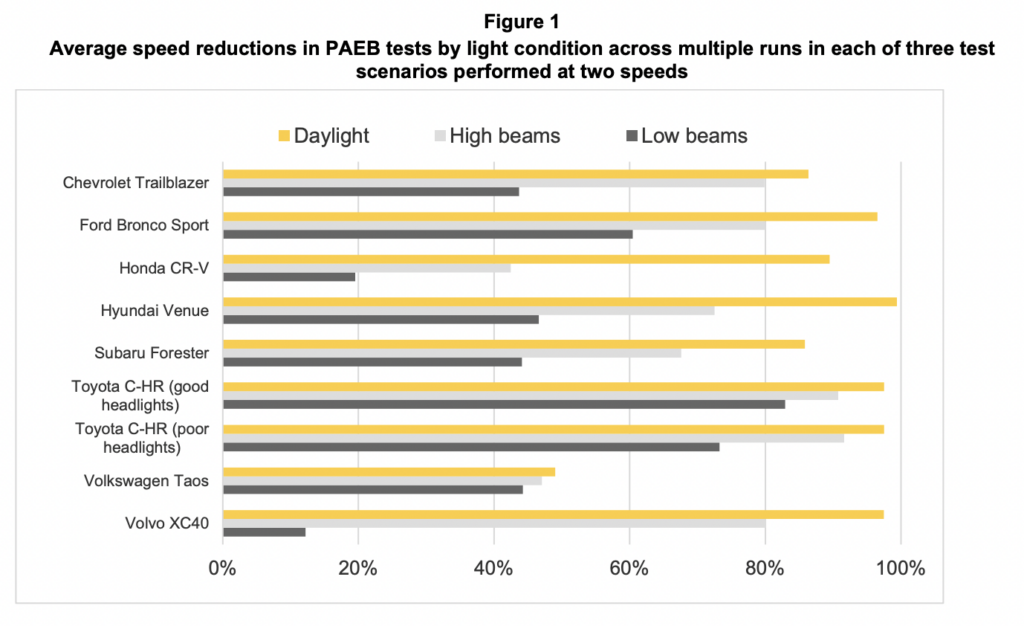 IIHS said track testing it recently conducted showed that “acceptable performance in the dark is possible.”

The Toyota, which uses a camera and radar, “had significant speed reductions when tested at night,” IIHS said.

The test revealed that “some systems worked much better than others in the dark, but there was no single type of technology that got better results,” David Aylor, manager of active safety testing at IIHS, said at the time.

The Taos, which uses radar, showed no performance decline from its daytime ratings, but it also put in the poorest performance in the daytime test.

The best performers in the nighttime tests — the C-HR and Bronco Sport — both use a combination of camera and radar. The Forester and Trailblazer, the only vehicles with camera-only systems and no radar, achieved nighttime results similar to those of three vehicles that use cameras and radar: the CR-V, XC40 and Venue.

IIHS is now developing a nighttime test in response to the new findings, and plans to publish its first official nighttime pedestrian crash prevention ratings later this year.

Joe Young, director of media relations for IIHS, said that while the institute occasionally files petitions for rulemaking, it was found that its consumer ratings programs are more efficient at driving change.

Those programs “have helped drive dramatic improvements in occupant protection in a variety of crash configurations and crash avoidance technologies,” Young said.

“IIHS also helped lead a voluntary commitment among automakers to get automatic emergency braking into new vehicles as standard equipment by the end of 2022. This process was faster than rulemaking would have been, and we estimate that it will prevent 42,000 crashes by 2025,” he said.

Two examples of rulemaking petitions that resulted in change were calls to strengthen the rear underride guards on the back of large trucks, and to require electronic logging devices on large trucks. The former was eventually included in the federal infrastructure law, Young said, while it took 30 years for the latter to be implemented.

IIHS conducts tests on vehicles equipped with PAEB technology on the covered track at its Vehicle Research Center. (Screen capture via IIHS)