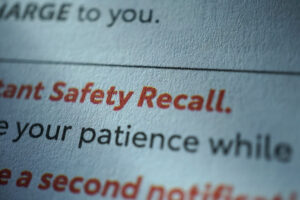 “We understand NHTSA’s latest request is a follow-up procedure to determine if the same or similar batteries involved in the recalls were supplied to other OEMs,” said LG Energy Solution in a statement to Repairer Driven News. “NHTSA has already completed its official procedures on most of the recalls, such as the GM Bolt and the Hyundai Kona/Ioniq. Additionally, we have already reached settlements with other related OEMs. Therefore, we do not expect this latest move by NHTSA to cause any new or additional issues.”

It might still be beneficial to establish a standard operating procedure during the vehicle check-in process, to confirm with owners if they’ve previously addressed the recalls. Hyundai cautioned in its recalls to keep the vehicles parked outside and away from structures in case of fire.

“The purpose of this Equipment Query is to write to LG, and other companies that might have purchased the same or similar equipment from LG, [to] notify them of this defect in any vehicles they manufactured, and to ensure thorough safety,” the April 1 NHTSA Office of Defects Investigation report states.

The first “safety-related defect” was reported by Mercedes on Feb. 24, 2020, in one of its 2019 Smart Fortwo Electric Drive vehicles. The OEM noted the vehicle had an LG Chem high voltage battery that “may contain a defect allowing for an electrical arc, which can ignite inside the battery cells, increasing the risk of a fire,” the report states.

Then, on Oct. 13, 2020, Hyundai notified NHTSA of a defect in some 2019 and 2020 model year Kona EVs noting a similar issue – “the high-voltage battery system in the subject vehicles, supplied by LG, may have been produced with internal damage to certain cells of the lithium-ion battery increasing the risk of an electrical short circuit, which could result in a fire.”

The OEM later issued another recall on March 1, 2021 due to another battery defect in 2019-2020 Kona EVs and 2020 Ioniq EVs. Hyundai found that when the negative tab of the battery is folded, the cell could allow the lithium plating on the tab to contact the cathode, which would lead to an electrical short and increase the risk of fire while the vehicles are parked, charging, and/or on the road, according to NHTSA.

“Utilizing the information obtained from the Recall 20V-701 software update, General Motors and LG Energy Solutions, the supplier of the battery cell module pack along with LG Electronics, determined the root cause of the thermal events to be the result of two simultaneous manufacturing defects occurring in the same battery cell,” states the 2021 NHTSA investigation report associated with the recall.

The most recent LG battery-related recalls were on Feb. 11 by Chrysler and on March 16 by Volkswagen. Vehicles affected are Chrysler 2017-2018 Pacifica plug-in hybrid electric vehicles (PHEVs) and VW’s 2021 ID.4. Chrysler reported 12 vehicle fires in its Pacificas but hadn’t determined, as of the April 1 NHTSA report, if they were caused by the hybrid battery packs. A class-action lawsuit was recently filed against the OEM over the issue, according to Top Class Actions.

Volkswagen found that the high voltage batteries “may contain insufficient soldering points and thus contain unreliable connections inside,” which could cause the vehicles to break down or lead to the engines stalling, resulting in crashes, according to NHTSA.

“As for the FCA Pacifica PHEV recall which involves 17,000 vehicles, the investigation is ongoing,” LG told RDN. “The recall on Volkswagen ID.4 (involving 351 vehicles) is due to faulty soldering points on the flexible printed circuit assembled (FPCA) inside the battery module. The FPCAs were made by one of our suppliers who has already resolved the issue. And the recall on Mercedes Benz 2019 Smart ForTwo Electric Drive vehicle is due to defective soldering, [which] only involves a single vehicle.”

According to the New York Post, LG agreed to reimburse GM $1.9 billion in October 2021 to cover recall costs. GM is facing multiple class-action lawsuits over defective batteries in its EVs leading to fires, according to Top Class Actions. The Post reports LG remains partnered with GM to build batteries for its next generation of EVs.