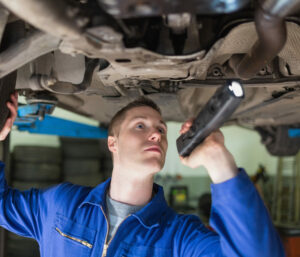 Gredinberg’s presentation was a continuation of January’s on the steps repairers should be taking during every repair with a deeper dive into researching for safe repairs.

“What you don’t know can really cause catastrophic failure,” Gredinberg said. 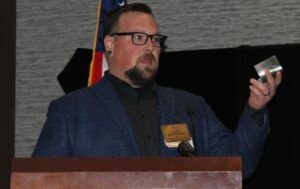 He gave an example of what can happen when repairers don’t research OEM repair procedures by bending a piece of steel he purposely heat treated – an improper procedure. After bending the steel with his hand, he demonstrated doing so can create a crack. Doing that with a more delicate metal, like aluminum, could cause damage that when “taking the time to understand what you’re working on” would be avoided, Gredinberg said.

Allen added that while research is a not-included operation, it’s important for the safety of consumers and the need to do so should be documented to receive compensation.

Another example Gredinberg gave to show the importance in researching OEM procedures was explaining the function of aluminum tape on front and rear bumper covers and why it should be replaced. The answers took some digging, he said, but were found in the new car features of the owner manual.

“If we don’t bring that car back to whole, as far as putting that little sticker on, whatever the outcome of it truly is, are we really putting that car back to the way it was designed? Going as far as into the new car features I think is pretty crazy to do, but that’s the reality of how far we have to research and understand how these cars are being built, manufactured, and designed,” Gredinberg said. “We can actually teach and educate the vehicle owners about their car. …Tell them that, ‘I put the sticker back on there to help your fuel economy.’ You just gained the trust of that vehicle owner even more so than the person down the street who’s just looking out for that quick buck.” 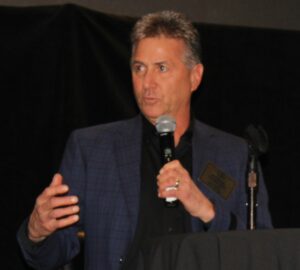 Another part of every vehicle that should be checked and replaced, if necessary, are seatbelt systems and child seat anchors, he added.

Gredinberg stressed that the “story” of each repair plan should be told in the line notes along with photos that that capture the damage and the processes carried out during repairs to explain why those procedures are being done and to prove they’re being done on the correct vehicle. And it isn’t just the technicians that should understand the procedures – the estimators should too, he said.

“You’ve got incredible complexity of vehicles today,” Giarrizzo said. “That goes beyond the visual inspection of the damage. In our shop, we’re measuring every single vehicle that we’re taking apart. …We’re going to take these serious steps to rule out, starting with the foundation of the vehicle, what’s wrong with it.”

Gredinberg and Allen also pointed out that OEM repair procedures are publicly available. Audi, like other OEMs, doesn’t allow access to everything for free but it’s still accessible, Allen said. 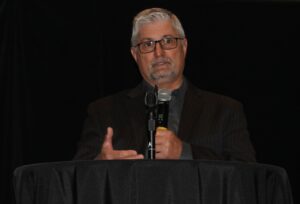 “‘Nobody told me, I didn’t know’ just doesn’t fly anymore in my book,” Allen said, adding that repairers can reach out to OEMs with questions. “…I think the ability to give the customer the explanation [of] ‘what is happening with your car, which will affect you, as well as the care that we’re going to take in repairing the car’ is part of the business. …It builds your customer retention but in transparency, it builds a better relationship with the adjusters. …They have a very short amount of time to write an estimate, come to some agreement or disagreement, and walk out the door. By you helping them along in that process in documenting and providing some of this knowledge builds better relationships. It’s about relationships and shared knowledge. It’s not a negotiation. It’s a mutual understanding.”

However, Gredinberg, said it’s also important to know when repairs should be handed off to someone else. “Let someone else that can fix that car correctly do that repair. We can’t fix everything. Don’t be afraid to say no.”

All presentation slides provided by CIC.

Photos of Gredinberg, Allen with and Giarrizzo taken by Lurah Lowery.