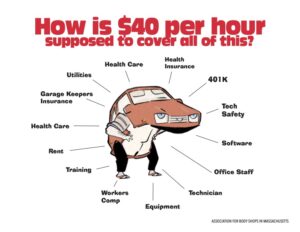 The Alliance of Automotive Service Providers of Massachusetts (AASP-MA) is helping collision repairers take their case for higher auto body labor rates directly to the public, with a motorcade and demonstration May 18 at the State House in Boston.

Auto body shop owners, family members, employees, vo-tech students, and allies will be urging members of the public to contact their legislators in support of filed legislation that would raise the state’s $40 labor rate, the lowest in the nation.

The demonstration is meant to bring the issue to consumers’ attention, and to keep pressure on lawmakers to pass legislation, Evangelos “Lucky” Papageorg, the executive director of AASP-MA, told Repairer Driven News.

Papageorg said he expects at least 200, and possibly 300, people will take part in the day’s events. Participants will begin gathering at 10 a.m., with picketing and a motorcade of flatbed trucks carrying damaged cars beginning at 10:30. Addresses by repairers and lawmakers will begin at 11.

He said some body shops are planning to close for the day, giving all of their employees the opportunity to take part.

Anyone interested in participating can visit AASPMA.org/rally to register.

AASP-MA supports House Bill 1111, which would adjust the labor rate for 34 years of inflation and index future changes to the region’s Consumer Price Index. Although it enjoys bipartisan support, with 38 legislators signed on as co-sponsors, the bill has so far failed to emerge from the Joint Committee on Financial Services.

Several bills addressing the labor rate, including HB111, were held in committee pending the completion of a report by the Special Commission on Auto Body Labor Rates. That report, adopted by a 10-3 vote, was submitted to the committee on April 13.

The commission declared that the state’s auto body labor rates “must be addressed” after more than three decades of inaction by auto insurers, and recommended a number of potential solutions, including HB1111 and several other pending bills that would regulate reimbursed rates.

During Jan. 25 and March 22 public hearings, dozens of auto body professionals and vocational teachers testified about the harm that the stagnant labor rate has done to the industry, which has absorbed decades of rising costs. Repairers noted that the low reimbursement rate makes it difficult to attract new technicians to the industry when they can make more per hour in many other related fields.

Given the speed with which the commission worked, beating its July 1 deadline by several weeks, Papageorg said AASP-MA expected that the bills would have been reported out of committee by now.

He said the organization is committed to making sure that the commission’s report does not suffer the same fate as a 2008 report that was shelved with no action taken.

The 2008 report recommended that the legislature review the effect on labor rates of managed competition in the insurance industry, consider whether laws requiring “fair and reasonable” rates were necessary, and convene bi-monthly meetings of repairers and auto insurers to discuss improving their services to consumers.

The reimbursement rate has only moved $10 in nearly 34 years, according to AASP-MA. Since 1988, the labor rate has increased $10 while the Consumer Price Index (CPI) has increased 137.7% and insurance premiums have increased 254%.

Featured image: One of the signs that will be displayed at the rally. (Provided by produced by David Deutsch of Deutsch Creative)