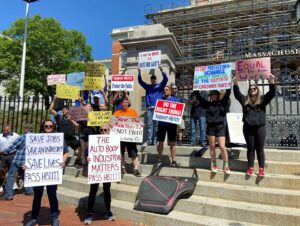 Some 300 Massachusetts collision repairers protested in front of the State House in Boston on Wednesday to urge passage of a bill that would raise the state’s stagnant auto body labor rate, which at $40 is the lowest in the nation.

The demonstration was organized by the Alliance of Automotive Service Providers of Massachusetts (AASP-MA) to build support for House Bill 1111 and its Senate equivalent, SB 709, which would adjust the labor rate for 34 years of inflation and index future changes to the region’s Consumer Price Index.

Although HB1111 enjoys bipartisan support, with 38 legislators signed on as co-sponsors, it has so far failed to emerge from the Joint Committee on Financial Services. 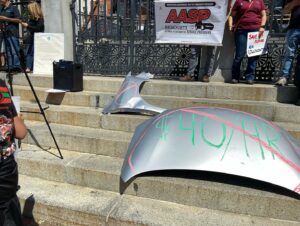 “It was truly a statewide effort,” Papageorg said. “We were definitely thrilled at the turnout and participation. We did a great job at bringing many issues to light.”

One of those issues, he said, is a general misconception about the labor rate.

Most people believe the technician is earning $40, and “don’t realize that it’s $40 to the whole business per hour, which then has to be doled out to not only the person that’s doing the actual work but to cover all the other expenses that are incurred in the process.” In contrast, insurers will pay labor rates of more than $100 to dealerships, or for mechanical work, he added.

Standing on the State House steps, collision program students from the Assabet Valley Regional Technical High School threw a hood and a fender onto the sidewalk to protest the $40 labor rate, recalling the Boston Tea Party of 1773.

“The main reason we’re here is to save the future of this industry,” Papageorg told the crowd. “There’s no young folks getting into this industry as much as they used to in the past.

“There’s a vocational instructor on the Cape who I think put it perfectly: Students get into collision repair because they love it. They love it. They think it’s cool. The problem is, loving and cool don’t pay the bills, and we need to be able to pay the bills, we need something for their future. …We can’t afford to be losing technicians over the border to other states who can afford to pay more, we can’t afford to lose them to other industries,” Papageorg said.

Guy Glodis, a lobbyist for the AASP-MA, delivered a fiery speech denouncing “the corporate greed, the injustice, and dishonesty of the insurance industry that has stagnated wages in this industry.”

Glodis noted that the Consumer Price Index has risen 137% in the 30 years since the labor rate was adjusted and that insurance premiums – “that’s their pay raise” – have gone up 254% over the same period.

“The insurance industry makes an argument every year why they should get a pay raise. But the hardworking men and women of this commonwealth who do the real jobs, they say no to. That’s corporate greed.

“The insurance industry has filled their pockets. They have record profitability,” Glodis told the crowd. “But at the same time, they won’t even offer a solution on how to make sure you get paid more money.”

Glodis was referring to the lack of recommendations from the insurance industry in the final report of the Special Commission on Auto Body Labor Rates, a group created by the legislature in response to the filing of HB1111 and other bills that would address the labor rate. 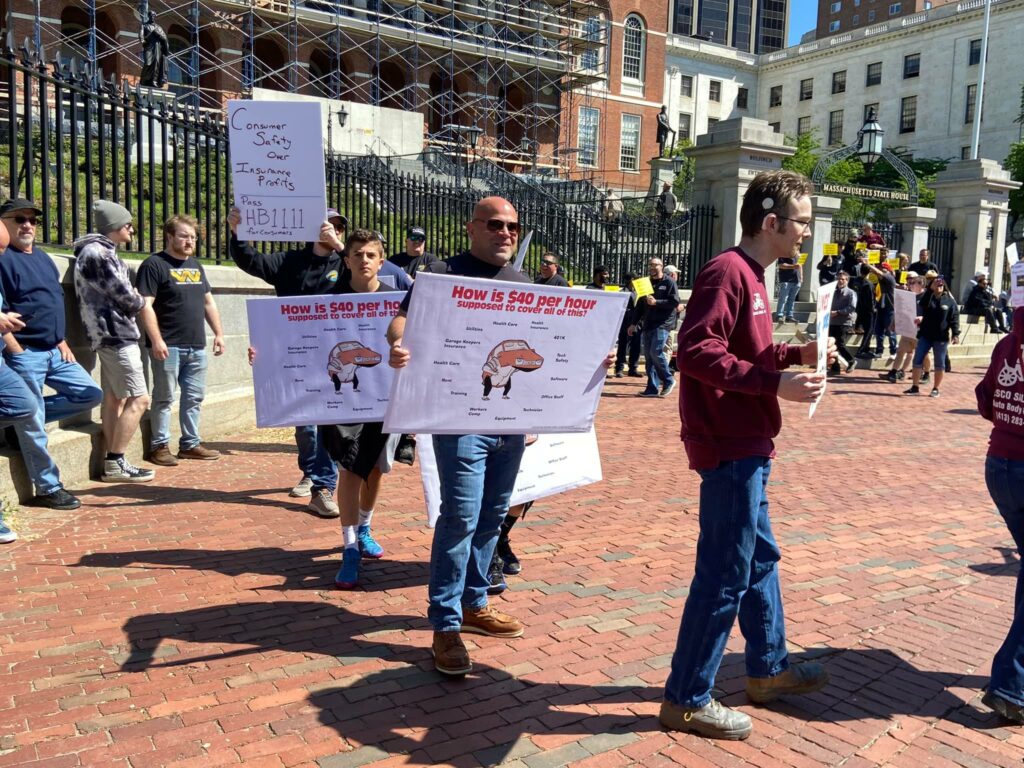 During public hearings on Jan. 25 and March 22 public hearings, dozens of auto body professionals and vocational teachers testified before the commission about the harm that the stagnant labor rate has done to the industry, which has absorbed decades of rising costs. Repairers noted that the low reimbursement rate makes it difficult to attract new technicians to the industry when they can make more per hour in many other related fields.

The commission issued a report supporting legislative action, and calling the status quo “not…a long-term solution to the issue of auto body labor rates.” It recommended a number of potential solutions, including several pending bills that would regulate reimbursed rates.

The report was adopted by a 10-3 vote, with the panel’s three insurance industry representatives all giving it an unfavorable recommendation. It was submitted to the legislature’s Joint Committee on Financial Services on April 13, weeks ahead of the commission’s July 1 deadline.

Among the report’s additional alternative solutions are three approaches recommended by AASP-MA. The first is an immediate increase of $33 in the current $40 labor rate, with yearly adjustments based on the region’s Consumer Price Index (CPI). The second is the passage of HB 1111 as proposed. The third is passage of HB 1111, with an adjustment in the rate correction period, and a schedule of rate increases that includes an immediate rise of $18 an hour, an increase of $10 in year two, and continued increases based on the region’s CPI.

“The tiered roll out addresses the immediate need for an increase to bring technicians back into the industry, while making the industry more appealing to younger individuals in the vocational schools,” AASP-MA said. “It also allows the insurance industry a corrective period and the ability to calculate reimbursement their premium needs during the transition to a fair and equitable reimbursement rate.”

Missing from the report were any suggested solutions from the auto insurance industry, which had three representatives on the commission.

Papageorg said he has not heard from state Rep. James M. Murphy (D-4th Norfolk), House chair of the Joint Committee on Financial Services, on when HB1111 and the others might be reported out of committee to the full legislature for action.

Under legislative rules, the committee has until June 30 to give the bills a favorable or negative report or send them on for further study. The formal legislative session ends on July 31.

Murphy’s office did not respond to questions from RDN by our publication deadline.

Asked for his view of the bills’ prospects, Papageorg said, “I’m optimistic that he [Murphy] is going to do the right thing. I can only trust that as a legislator, and with all the information that’s been presented to him and his committee, that and because of the importance of the bill to the safety of the motoring public and an entire industry, that they will move forward on it and not necessarily wait until the deadline.”

AASP-MA video of the State House demonstration, via Facebook

Featured image: Protesters hold signs on the steps of the State House in Boston, Massachusetts, in support of legislation that would raise the state’s stagnant auto body labor rate. (Provided by AASP-MA)

A fender and a hood, thrown by vocational school students in protest of the state’s $40 auto body labor rate, the lowest in the nation. (Provided by AASP-MA)

Protesters hold signs showing how many of a shop’s expenses are covered by the labor rate. (Provided by AASP-MA)