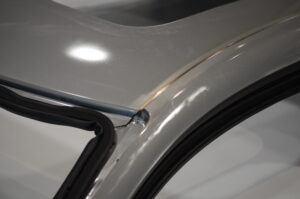 The 2022 Honda Civic incorporates a laser-brazed roof, extending that technique to the OEM’s entry-level vehicles, and uses a greater amount of high strength steel (HSS) and aluminum to save weight, a Honda project leader said during a presentation at the Great Designs in Steel symposium.

“We focused on areas to improve crash ratings, including the front engine compartment, beside some areas under the doors, and an improved door ring construction,” she said. The 2022 Civic has earned a Top Safety Pick+ rating from the Insurance Institute for Highway Safety (IIHS). 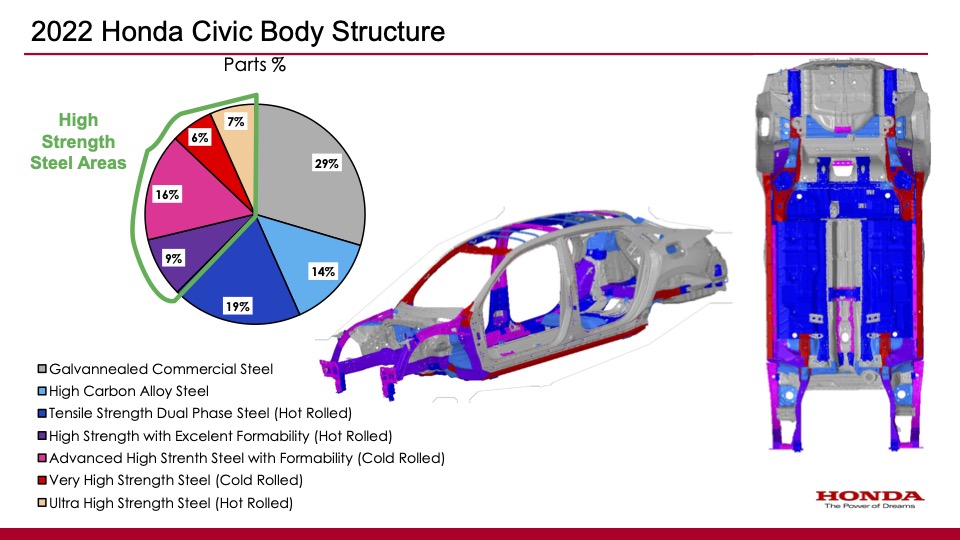 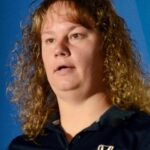 While the use of HSS is not new for Honda, there were attachment challenges to be met with new applications, Fuel said. “Every time you introduce a new material, it creates the question of how do you weld through it, and how do you make that sustainable long term in a mass-production setting?”

The body in white uses weld-through sealer, which presented its own challenges, she said.

“Internally for a while, our biggest struggle was trying to get the welds around the sealer or through the sealer,” she said in response to a question. “That was new for us. We’ve applied sealer in the past, but it’s not been the same characteristics that we see with high-performance adhesives. So we’ve incorporated … a lot of vision systems to be able to manage that sealer location in relationship to the welds.” 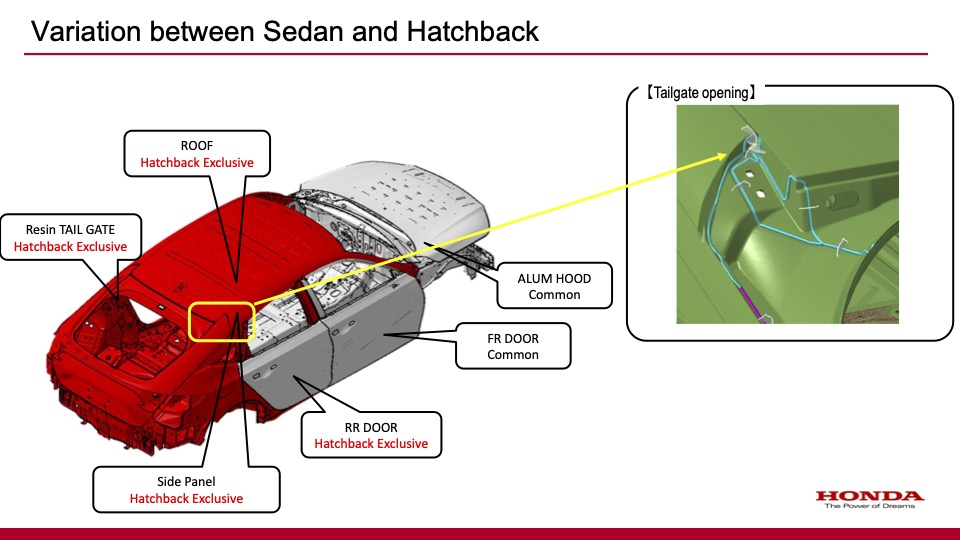 Other materials, such as aluminum and resin, also save weight, but serve other purposes as well, Fuel said.

She noted that the Civic has an aluminum hood, which is designed to mitigate pedestrian injuries through the use of shock absorption points, and an embossed area. It’s the first use of an aluminum hood on a Civic in North America.

The hatchback is produced as a resin-and-steel sandwich that weighs 20% less than an all-steel component. “It creates attractive styling lines, and allows some features of a steel tailgate,” she said. For consumers, it’s the vehicle’s largest visible change point over the previous model, she said.

This is the first time the hatchback version of the Civic has been produced in Indiana. The sedan and hatchback are similar, sharing 85% of the underbody and 99% of the chassis. 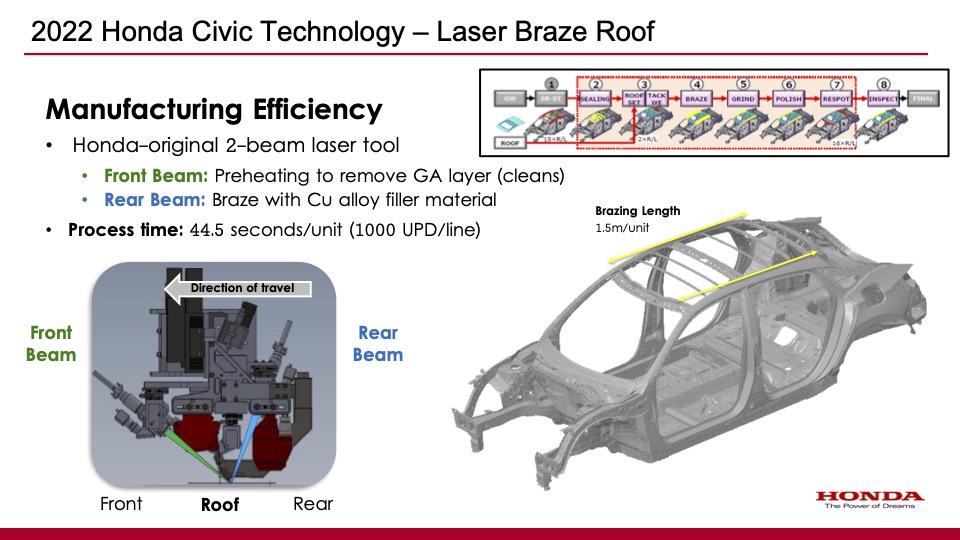 The 2022 model introduces the use of laser brazing in the Civic, extending the technique to Honda’s most affordable vehicles. Laser brazed roofs have previously been used by the OEM on a variety of vehicles, including the 2018 and up Honda Accord, 2021 and newer Acura TLX, and all Clarity models.

Fuel said Honda invested $50.2 million to equip the Indiana plant for the new technology, which occupies four process spaces in the plant. It seems likely that the technique could extend to other U.S.-made Hondas as they’re redesigned.

Honda’s laser brazing technology uses a two-beam system, with a front green laser preheating and cleaning the galvanneal layer, and a rear blue laser melting the wire and forming the joint. A jig descends to apply pressure to the roof to remove any gaps between the roof and the side panel prior to brazing. The whole process takes the robots about 44.5 seconds per body to complete.

Laser brazing provides a cleaner look, eliminating the molding used between the roof panel and side panels, and improves body rigidity by fusing the panels together, Fuel said. 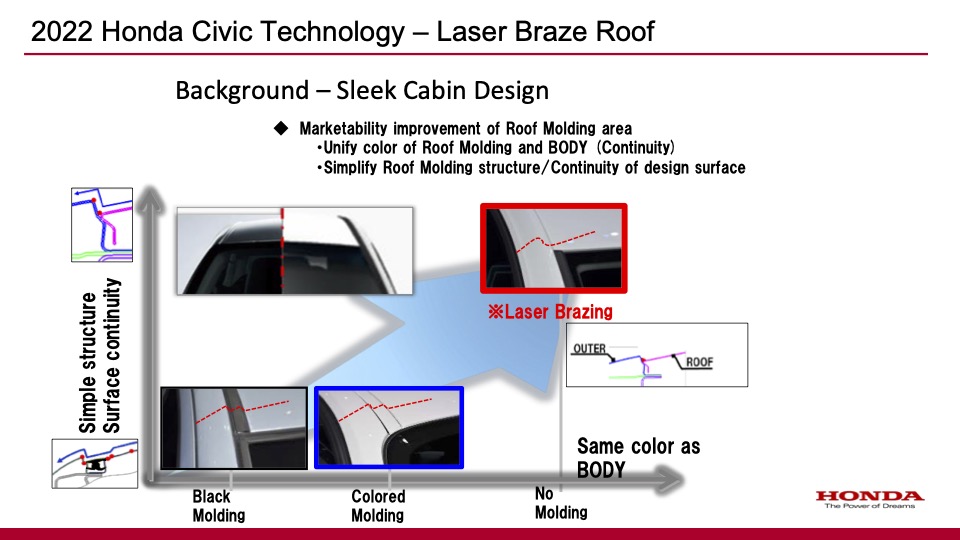 As I-CAR’s Scott VanHulle noted in a later presentation at GDIS, body shops do not have the capability to do laser brazing. “We need a very, very detailed procedure on that because we cannot recreate laser brazing or laser welds in the body shop. There are no tools available that we could safely use in a repair facility in that case,” VanHulle said.

Repairers will need to follow Honda’s instructions at techinfo.honda.com/rjanisis/logon.aspx to carry out a safe and proper repair.

Another new process developed for the Civic involves the shaping of the rear wheel arch hems. The process, Fuel said, includes a hem guide docking to the body, and a roller system that makes five passes at different angles to complete the look. This may be another process beyond the ability of repair shops to recreate. 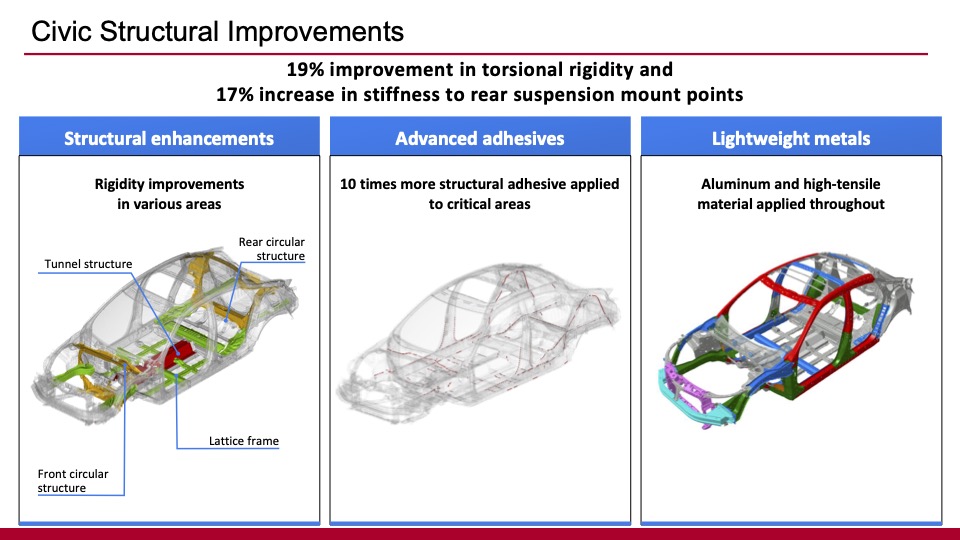 The Civic makes greater use of high-performance adhesive on various underbody components, extending an industry trend. The use of 10 times as much adhesive as was used on the previous Civic increases the rigidity of the body while improving the driving feel for the customer, Fuel said.

The adhesive can be applied in “either a stitch or continuous pattern. And it’s depending on the location and the weld location surrounding the application,” she said.

According to Honda, applying adhesives where spot welds are performed combines the strength of the weld and the broader surface area of the adhesive. This increases the stiffness of the joint, minimizing the need for increased sheet metal thickness or the addition of welded-on reinforcements.

The Civic’s floor strength is improved through the use of lattice frame members, and by joining the front and rear ends of the center tunnel to the dashboard lower and rear crossmember. Overall, Honda says the new Civic is 8% stiffer in torsional rigidity, and 13% stiffer in bending rigidity compared to the previous generation.

A section of the roof of a 2022 Honda Civic, showing the unpainted laser brazed seam. (Dave LaChance/Repairer Driven News)