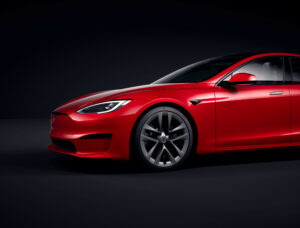 A Tesla Model S caught fire in California last week while sitting in a wrecking yard awaiting dismantling, three weeks after it was involved in a collision. The incident serves as an example of why repairers should be aware of electric vehicle (EV) fire risks and safety precautions, which can vary by OEM.

Tesla’s 31-page Model S emergency response guide (ERG) for model years 2016-2021 says the vehicles shouldn’t be submerged in water to extinguish or cool the battery once on fire. However, Sacramento Metropolitan Fire District firefighters did just that, according to a post on the agency’s Instagram.

“The vehicle was fully involved with fire on arrival, and took a significant amount of time, water, and thinking outside the box to extinguish,” Metro Fire wrote. “Crews knocked the fire down, but the car kept re-igniting and off-gassing in the battery compartment. Working with the on-site wrecking yard personnel, the Tesla was moved on its side to gain access to the battery compartment underneath. Even with direct penetration, the vehicle would still re-ignite due to the residual heat.

“Crews and on-site personnel then created a small pit, placed the car inside it, and filled the pit with water effectively submerging the battery compartment. The pit ultimately reduced the total amount of water needed, estimated at 4500 gallons, and limited the runoff of contaminated water. The vehicle was fully extinguished, and no injuries were reported.”

Tesla recommends the following, in part, if the high-voltage battery catches fire, is exposed to high heat, or is generating heat or gases:

“Use large amounts of water to cool the battery. It can take between approximately 3,000- 8,000 gallons (11,356- 30,283 liters) of water, applied directly to the battery, to fully extinguish and cool down a battery fire; always establish or request additional water supply early. If water is not immediately available, use CO2, dry chemicals, or another typical fire-extinguishing agent to fight the fire until water is available. Note: Tesla does not recommend the use of foam on electric vehicles.

“If safety permits, lift or tilt the vehicle for more direct access to the battery (see chapter 2). Water may be applied from a safe distance ONLY if a natural opening (such as a vent or opening from a collision) already exists. Do not open the battery for the purpose of cooling it. Tesla does not recommend placing the vehicle in a large container full of water.”

This calls attention to the importance of always following repair and storage procedures provided by OEMs. Tesla warns in its Model S ERG that battery re-ignition can occur after a fire so it’s best to store the vehicles outside at a safe distance of 50 feet from other vehicles and structures. It’s also important to note that when a Model S is involved in a fire the entire vehicle should be thought of as energized and that anyone who touches it is at risk of injury making full PPE, including a Self-Contained Breathing Apparatus (SCBA), essential, according to the ERG.

Even though the June 13 fire was the agency’s first Tesla fire, Capt. Parker Wilbourn told The Washington Post they’re prepping to battle more EV fires as the popularity of the vehicles rises.

“This is a whole new animal for the fire service,” he told The Post. “We’re still trying to wrap our heads around the [electric vehicle] fires.”

In February, State Farm filed a $1.27 million subrogation claim against Tesla, claiming that a “defect in design or manufacture” of a 2016 Tesla Model S started a fire that heavily damaged a Carmel, Indiana couple’s home in 2020. The parties are seemingly working toward a settlement, based on the mention in court documents of a settlement conference.