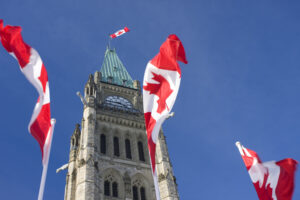 A petition in favor of right-to-repair legislation that would give owners control over the data generated by their vehicles has been delivered to Canada’s House of Commons.

The Canadian government now has 45 days to respond to the petition, which is supported by the Automobile Industries Association of Canada (AIA), a 4,000-member organization that represents that nation’s automotive aftermarket supply and service industry.

The petition, which has received 1,786 signatures, calls on legislators to “protect Canadian vehicle owners by giving them access and control of the data generated from their own vehicle,” and to “move quickly to pass legislation which acknowledges the right of consumers to own their data so they can continue to repair their vehicle at the auto repair shop of their choice.”

The petition argues that vehicles are gathering “enormous amounts of data about the vehicle and its driver, including important maintenance and repair information,” and that this data is transmitted “only to the automakers, giving them full control over it and authority to decide who can access it.”

“Without direct access to and control of this data, vehicle owners may face higher costs and have fewer options when it comes to who maintains and repairs their vehicles, restricting their ability to choose more affordable options,” the petition states.

The petition was filed in support of C-231, a right-to-repair bill introduced in February by MP Brian Masse (Windsor West). More extensive than the petition, the bill would authorize the Competition Tribunal to require OEMs to provide “access to diagnostic and repair information as well as to service parts” to independent service providers on the same terms offered to dealers.

“Repairing modern vehicles requires access to the vehicle’s diagnostic data,” AIA said in a position statement. “Automakers control diagnostic data. New vehicles wirelessly transmit diagnostic data to automakers, allowing them to control all access to it, including which auto repair shops can obtain it and under what terms. Increasingly, Canadians have no choice for auto repair. Because automakers won’t share diagnostic data, this leaves owners with only one option: to service their vehicles at the dealership.”

Access to OEM repair information is protected in Canada under the Canadian Automotive Service Information Standard (CASIS). Similar to the 2014 memorandum of understanding (MOU) between American OEMs and the aftermarket, CASIS is a voluntary agreement, reached in 2009, between the AIA and the National Automotive Trades Association (NATA), representing the automotive aftermarket industry, and the two associations representing Canadian automobile manufacturers and distributors: the Canadian Vehicle Manufacturers Association (CVMA), and the Global Automakers of Canada (GAC).

According to NATA, CASIS was created “to provide a framework for the auto manufacturers to share service and repair information with the automotive aftermarket industry on a level equivalent to information available to authorized dealerships.”

When needed information is not available through providers like Mitchell, Alldata, and Identifix, or a repair requires a vehicle software update,”the only place to go is the OEM website,” NATA says. “Furthermore, the auto manufacturers are continually updating their repair procedures, issuing position statements and other information, so to be sure you are following the most current procedures, the OEM websites are the only choice.”

CASIS “worked well for traditional cars,” AIA said. “However, for a truly open, fair, and competitive Canadian automotive aftermarket to continue to exist, consumers need to be protected by legislation that reflects the new reality of vehicles in Canada and give the aftermarket direct, remote, and real-time access to diagnostic data.”

The legislation, supporters say, would update the CASIS agreement “to include the rights of digital software that will cover future innovations and technologies as we move to zero-emissions vehicle standards and EVs;” and “ensure that consumers have a right to choose where they get their vehicles fixed, and to help the environment by making sure vehicles with emissions are stronger and also cleaner.”

As Canada considers the issue, national right to repair legislation filed with the U.S. Congress appears to have made little progress.

H.R. 6570, also known as the “Right to Equitable and Professional Auto Industry Repair,” or REPAIR Act, was filed in the House on Feb. 2, and referred to the House Committee on Energy and Commerce that same day. According to Congress’s online legislative tracker, there has been no further action taken on the bill.

In a joint press release issued when the bill was introduced, the organizations said that the legislation, filed by Rep. Bobby Rush, D-Ill., would require that “All tools and equipment; wireless transmission of repair and diagnostic data; and access to onboard diagnostic and telematics systems needed to repair a vehicle” be “available to the independent repair industry.”

According to the CAR Coalition, any OEM using wireless technology for the transmission of repair and diagnostic data would have to provide owners and their designees with “standardized, direct access to vehicle-generated data needed for the repair and maintenance of their vehicle via a standardized access platform” within 12 months of a final rule from the National Highway Traffic Safety Administration (NHTSA).

The legislation would prohibit “impeding a vehicle owner or a repair shop from obtaining service information, tools, or parts, including the ability for a vehicle owner to choose aftermarket parts, needed to fully maintain and repair a vehicle,” according to the CAR Coalition’s website.

There was no specific mention of requiring the proper and safe repair of vehicles, or of the use of OEM information and repair tools, which independent repair shops can currently access.

The Peace Tower of the Canadian Parliament building. (Vladone/iStock)