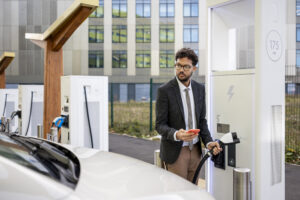 AAA’s latest consumer survey reveals that one-quarter of Americans surveyed say they would likely buy an electric vehicle (EV) the next time they’re looking to buy with Millennials leading the pack at 30%. J.D. Power has also found an uptick in EV interest.

The survey was conducted online and by phone by which 1,051 respondents’ answers were collected. Seventy-seven percent of respondents said their No. 1 reason for considering an EV is to save on fuel costs.

“AAA believes with rising gas prices, Americans’ conversion to electric vehicles will continue to increase,” a news release about the survey results states. “However, consumer hesitation surrounding range and accessibility to charging continues to draw concerns.”

“The increase in gas prices over the last six months has pushed consumers to consider going electric, especially for younger generations,” said Greg Brannon, AAA’s director of automotive engineering and industry relations, in a statement. “They are looking for ways to save, and automakers continue to incorporate cool styling and the latest cutting-edge technology into electric vehicles, which appeal to this group.”

Respondents’ reasons for hesitation to purchase an EV include:

According to AAA, automakers “have made great strides to improve range, yet consumer anxiety over it remains a barrier to adoption.”

J.D. Power’s study found that while owners of battery electric vehicles (BEVs) are slightly less satisfied with their vehicle’s range/charging speed than they were last year, high gas prices have led to a noticeable decrease in fuel economy/range satisfaction among owners of gas-powered vehicles.

The drop in satisfaction with internal combustion engine (ICE) vehicles leaves them just seven points ahead of BEVs on a 1,000-point scale, the 2022 U.S. Automotive Performance, Execution and Layout (APEAL) Study found.

The drop in satisfaction with economy/range also has contributed to a one-point decline in overall new vehicle satisfaction, which J.D. Power said is the first decline since 2014 and only the fifth year-over-year decline in the 27-year history of the study.

AAA found that 6 in 10 Americans, or 60%, think electric vehicles can travel between 100 to 350 miles before running out of charge, which aligns with today’s electric vehicle capabilities. “These findings suggest the improvement in range alone hasn’t been enough to address consumer range anxiety concerns as previously hoped.”

“The deeper issue with range anxiety is that it’s going to take more than just improving how far an electric vehicle can go to convince people to make the switch,” Brannon said.

AAA provided the following information in hopes that if the public has a better understanding of EV ownership, they’ll be more likely to purchase one:

In the APEAL Study, owners consider 37 attributes, ranging from the sense of comfort they feel when climbing into the driver’s seat to the exhilaration they get when they step on the accelerator. Their responses are aggregated to compute an overall APEAL index score.

“The most important factor leading to the industry decline this year is owners’ perception of their vehicle’s fuel economy,” said David Amodeo, director of global automotive at J.D. Power. “The study was fielded as fuel prices were experiencing a meteoric rise, and that pinch at the pump is conveyed in lower vehicle satisfaction. Battery-electric vehicles have not been negatively affected by the increase in fuel costs but do have issues related to battery range and charging time.”

BEVs also underperform gasoline vehicles, with an index score of 838. J.D. Power said. That score does not include Tesla vehicles, which were summarized separately from the BEV composite score so that the brand’s dominance in the category would not skew the results of all other BEVs. Tesla vehicles achieved a score of 887.