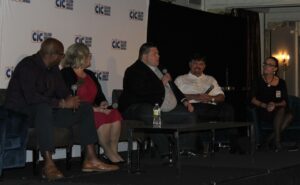 During a panel discussion held by the Collision Industry Conference (CIC)’s Estimating & Repair Planning Committee last week shop owners and adjusters agreed repair plans should be made by the shops, not the billpayers, and defined the difference between an estimate and a repair plan. In fact, some on the panel said they no longer use the word estimate and advocated that the industry move away from using it.

When asked what they view as the difference between an estimate and a repair plan, Leroy Hamilton, who is a damage appraiser with Acuity Insurance, said an estimate is written based on what he sees and the repair plan is left up to the shop. “Because once they get into the vehicle they’re able to discover if it’s going to be a supplement or whatever it may be. That’s when I depend on them to lead me the rest of the way. From my experience, I do not tell the shop what to do. They show me the way and I go from there.”

Although 68% of the audience present for the committee’s panel discussion weren’t repairers or insurers, 69% responded to a poll question that OEM repair procedures are important when creating a repair plan. Second, at 10%, were photos followed by estimating system guides and notes about discussions tied at 9%. Last was line notes at 3%.

Connie Hutton, with Erie Insurance, had a similar answer to Hamilton’s when asked about the difference between an estimate and a repair plan. She said she takes photos and writes her estimates based on what she sees, then talks with the vehicle owner and sends her estimate to the shop of their choice and communicates with the shop. “It’s their [shop] repair plan. If there’s a question, it’s not my question. It’s them — to do the repair plan.”

Rob Wagner, owner of Rob Wagner Auto Body in Pittsburgh, said his shop has moved away from writing “parking lot estimates in the traditional sense.” The repair plan is the estimate and potential customers can book a consultation to go over what repair plans would look like, he said.

“Quite frankly, from my point of view as a repairer, it’s a gigantic waste of time,” he said. “We spend that time educating the customer. …We’re going to explain, basically, a brief overview of the repair process, what we might run into, start to get an idea of an amount that the repairs are likely to exceed, and then go from there of how are they going to pay for it?”

Ron Perretta, owner of Professionals Auto Body in Pennsylvania, said his shop doesn’t write estimates at all. “People have got to choose what they want to do so there’s an awful lot of communication with that person on what the next steps are going to be. …That’s even in a shop tour — showing them equipment, showing them certifications, showing them the procedures that we go by, giving them an awful lot of literature so they can study that to make decisions.”

Erin Solis, with Certified Collision Group, said repairers “need to remove the word ‘estimate’ from our vocabulary inside shops altogether.”

Database Enhancement Gateway (DEG) Administrator Danny Gredinberg, who is the Estimating Committee’s chair, said it’s about “upping the level of how we talk to the customer” by doing away with “the old mentality” of estimating how a car could be fixed and turning the focus to developing repair plans that detail how they will be fixed.

When it comes to documenting repairs, Hamilton and Hutton reiterated that they depend on the repairers – the experts – to tell them how vehicles should be repaired.

“I can’t tell a doctor how to do open heart surgery,” Hamilton said. “I am not going to tell a body shop how to do their job.”

Hutton added, “They’re responsible to the customer. I’m responsible for paying the bill.”

Wagner said a challenge he’s faced is billpayers being overwhelmed by the amount of detail in his repair plans, which often have 300 or more lines and a document to go along with each line from a photo to an OEM repair procedure, or diagrams. “It’s very tough too when you put that amount of time into it to have it not really be looked at and, for lack of a better term, get berated for going through and trying to make their [the billpayer’s] job easier.”

Perretta refers to the documentation that goes with the repair plans at his shop as “evidence,” and said plans are written with detail from start to finish so repairs don’t have to come to an unexpected stopping point. “Once it gets to production, it’s going through.”

When the panel was asked what they’d change about the current damage documentation process, Solis said she’d like to find a way to decrease the time it takes to blueprint, which right now can take eight hours for one.

“We have to have that documentation, we have to,” she said. “We just need an easier way to do it.”

When Gredinberg asked Hamilton and Hutton what makes it easier for them to accept and approve an operation, they both said communication. Hamilton said he’s a firm believer in visiting shops and calling them “to get things done.”

Hutton said shops just have to let her know what they need and provide documentation for it, such as extending the length of rental, and Erie will pay it. She said it’s important for shops to also make sure they’re getting documentation from the sublets they work with because the insurer will come back to the shop for the details before they’ll pay.

Perretta said there’s “a laundry list of things” that carriers push back on paying for, from washing vehicles to test drives. Both he and Wagner said insurers don’t always read the documentation they’re given.

Perretta said he recently asked an appraiser, “‘Do you look at any of the documentation that I give you?’ At least he was honest and he said, ‘No, I don’t look at any of it. I don’t have time. I’ve got other ones that I’ve got to go see.’ This is a challenge for us because that all falls back on the customers.”

Rates are also an issue, he added, which vary by shop resources and experience whether overpaying or underpaying. “It just comes down to education. They [insurers] don’t want to educate themselves. …They’re still looking at things like it’s 20 years ago.”