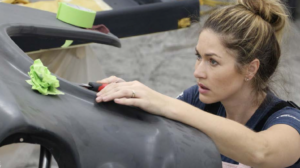 With women making up just 2.5% of employed automotive technicians, recruiting female candidates for careers in the industry is an “obvious” solution to solving the ongoing technician shortage, the TechForce Foundation says in a new whitepaper.

With that in mind, TechForce sought suggestions from women employed in the industry about how employers can attract, retrain and grow more women techs. The feedback from the 31 participants is summarized in the foundation’s recently published whitepaper, “Women Techs: Solving the Tech Shortage Problem.”

The women who took part in the “Women Tech Rocks” initiative reported overcoming discouragement and obstacles at virtually every point in their careers, from societal discouragement from working in a male-dominated field to experiencing bias from customers, co-workers, and management.

TechForce has taken their feedback and distilled it into concrete “action items” that employers can take to help bring more women into the industry. Those are listed at the end of this article.

“Women techs are fierce renegades who refuse to be stifled by society’s expectations; they resiliently overcome challenges and reject any attempts to limit them,” the report says. “Women techs love being technicians – and they hope more women will join their ranks, but in order for that to happen, transportation industry employers must establish a culture where women feel welcomed and supported – where they can envision themselves enjoying a long career.”

The 31 women who contributed their perspectives to the report range in age from 19 to 61, and live in various regions of the United States, as well as Australia, Canada, and the United Kingdom. The great majority are automotive technicians, while one is a refinish technician.

For a full copy of the report, visit https://techforce.org/women-tech-white-paper/

Ninety-three percent of women techs were discouraged from pursuing the field when they were children and teenagers, the report said. “Technicians are often portrayed as dirty and greasy, creating an image that few parents encourage their children to embrace, especially the parents of young women who often have additional reservations related to the challenges their daughters are likely to face while working in a male-dominated field.”

That discouragement is a “major deterrent,” the report said. Those who expressed an interest in becoming a technician in their youth did not arrive at their chosen career until later in life, “typically because they were discouraged when they were younger,” the report said. It found that “internalized societal pressures …led them to assume this ‘just wasn’t something a girl was supposed to consider as a career.'”

Those who made their way into vocational programs found more discouragement. “Every woman who discussed attending a vocational, high school or post-secondary program faced discrimination during her educational tenure,” the report said. “The vast majority reported that the students themselves were the biggest challenge as a mostly male student cohort did not provide an easy road.”

Businesses can play a part in turning that scenario around by recruiting a more diverse workforce through their engagement with schools, and through the marketing messages they disseminate to the public, TechForce said.

Hiring existing women techs can help build support for more female workers, the report said. “At least 39% of women techs engage in efforts to support other women with similar interests and promote the role of technician as a viable career path.”

The study participants told TechForce that playing up the science, technology, engineering, and math (STEM) aspects of the technician’s work will make it more appealing to women, who it said are “up for that challenge.”

Fairness on the job

Fully 84% of women techs said they encountered bias on the job from customers, coworkers, or management. However, as “a minority in a male-dominated industry,” they’re likely to remain silent about it. “They typically take the stance of ‘just brush it off’ when faced with conflicts in the workforce and are hesitant to assume that mistreatment is related to gender bias; however, when they experience bias, they’re often reluctant to voice their concerns because they feel their complaints fall on deaf ears, or they opt to remain silent for fear of retaliation.”

Employers can create a better work environment by engaging in open, informal dialog, as well as through diversity and sensitivity training, involving women in discussions, listening to women’s insights, and developing a diversity, equity, and inclusion (DE&I) strategy. “Policies prohibiting bias are only effective when they are enforced from the top levels of management/ownership, and everyone is held accountable,” the report advised.

Women need to be included in the physical workplace as well, by having uniforms that fit properly and dedicated locker rooms and restrooms. “Being a minority in any industry can feel isolating, and many women techs shared this experience,” the report said. “Community plays a vital role in successfully building a diverse workforce and cultivating a positive work culture by offering women techs a support system to rely on. Unfortunately, the overall lack of women technicians creates a perceived absence of community, often causing women techs to feel isolated and less comfortable advocating for themselves.”

Businesses that hire and retain women techs “accomplish much more than merely filling a job position – they create an ideal situation for attracting employees in the future because women techs who are satisfied in their jobs are prone to promoting that employer and the industry as a whole. And with that kind of passion fueling the search for more technicians, the tech shortage will become a thing of the past in no time,” the report said.

Women technicians are often unfairly perceived as having fewer skills and less experience than their male counterparts, the report said. “Though they are willing to prove themselves by doing their jobs well, many indicated that they must demonstrate their abilities at a much higher level than their male peers to be viewed as equally competent.”

All women techs told TechForce that the opportunity to continue their training, expand their skillsets, and be granted equal opportunity for advancement is important to them. Yet the majority “reported a belief that their aspirations were inhibited or altogether prevented as a result of their gender.”

Sixty-three percent of women who were denied opportunities for growth switched employers, or industries, in pursuit of their goals.

It recommended that employers identify and define career paths for women techs. “While this is important for all employees, it plays an even more essential role in women’s careers since many women choose to become mothers, and pregnancy is not always conducive to working in a shop environment; however, it’s important to note that while women techs acknowledge the difficulties of juggling work/life balance as a parent and technician, few want to be permanently moved to an office setting.”

The report provides the following “action items” for employers to consider:

“We invite you to work with TechForce to raise the bar of awareness for this profession, increase the number of young folks entering technical education for careers as technicians, and forward a new generation of the technician workforce,” Dana Rapoport, Chief Consultant, Diversity and Inclusion, for the TechForce Foundation, wrote in the report’s conclusion. “Let’s work together to solve the tech shortage.”

Images provided by the TechForce Foundation