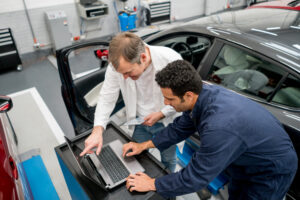 Rules Engine is now enhanced with the ability for shops to customize repair workflows. Repairify President Cris Hollingsworth explained to Repairer Driven News that through the software application’s algorithm and interfacing with vehicles, repairers can determine — based on OEM repair procedures — the best tool to use for each job whether aftermarket, OEM, or as asTech calls it – “OEM-compatible.”

The company has conducted thousands of tests on aftermarket tools to see how they perform compared to OEM tools and continues to test, Hollingsworth said. Tools that perform as well as the OEM tools are deemed “OEM-compatible” tools.

“The Rules Engine is customizable for the shop and it has multi-dimensions in it,” Hollingsworth said. For example, the shop can choose the makes they’re certified to work on or the vehicles they most commonly work on when determining their “shop rules” in the app to already have as a default whether OEMs require OEM tools or not. 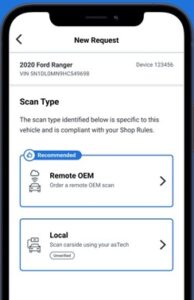 “Then the second set of rules would kick in and we would then route the scan through the appropriate tool based upon the guidance that we get from the second tier rules,” Hollingsworth said.

He added that second-tier rules could come into play based on agreements with insurance carriers. And shops can also set up a default third-tier rule if jobs don’t get picked up based on tier one or tier two rules. “It gives a shop the ability to do multi-dimensional customization of the scans and the diagnostics that they are engaging in as the vehicles come into their shops,” Hollingsworth said.

An earlier version of the software application was released several months ago to stress-test the software and get feedback from the industry but it didn’t have the tiered dimensions so now it’s “much more robust” and comprehensive, he said. Hundreds of shops have used Rules Engine and their feedback, he noted, has been positive with users saying it’s a step forward.

“This is all about optionality and choice for the shops,” Hollingsworth said, adding that the Rules Engines helps with consistency and can help repairers work more efficiently.

“Right now, there’s no magic bullet to solve for the shortage of technicians. …The way that we’re trying to help our customers is to effectively say, ‘Look, you’ve only got so many technicians and so the best thing we can do to help you is increase the productivity per technician.'”

Rules Engine is available for PC and mobile. The application can identify required calibrations, available tools, and OEM-specified procedures to safely repair and calibrate ADAS systems using adasThink by uploading the repair estimate and VIN. The processes can also be further automated through available integrations with estimating systems CCC Intelligent Solutions and Mitchell International.

The new features will be demonstrated alongside other Repairify products at this year’s SEMA Show in November.

Screenshot of Rules Engine in use (Credit: asTech)