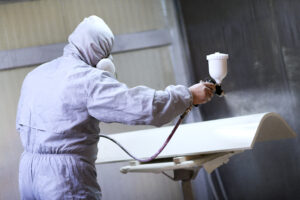 The Environmental Protection Agency (EPA) has finalized its C.I. Pigment Violent 29 (PV 29) revised risk determination to stand by its original finding — that “as a whole chemical substance,” PV 29 presents an “unreasonable risk of injury to human health when evaluated under its conditions of use. ”

PV29 is used as a pigment in paints, coatings, and plastics – primarily in vehicles and industrial carpeting. EPA evaluated PV29 under the amended Toxic Substances Control Act (TSCA) and released its first risk evaluation in January 2021, which states PV29 poses “unreasonable risks to workers and occupational non-users from 10 conditions of use.” At the time, the agency said there was “no unreasonable risk” to consumers, bystanders, the general population, or the environment.

EPA’s “final revised risk determination,” released in September, concludes that PV 29 poses “unreasonable risk to workers and occupational non-users from manufacture, processing, industrial/commercial use in paints and coatings and merchant ink, and disposal” and poses no risk to the environment. The only consideration of risk to consumers and the general population in the revised determination was the use of professional-quality acrylic and watercolor paint, which EPA says doesn’t warrant inhalation risk.

EPA noted that the conditions of use that didn’t drive unreasonable risk exposure include industrial and commercial uses in finished plastic and rubber products for automobile plastics and industrial carpeting.

“This revision supersedes the previous condition of use-specific no unreasonable risk determinations in the 2021 PV29 risk evaluation (and withdraws the associated order),” an EPA news release states. “The final revised risk determination does not assume that workers exposed to PV29 always or properly wear personal protective equipment (PPE).”

Earlier this year, EPA said they would take a “whole chemical approach” and make regulations based on the assumption that PPE isn’t being worn.

Rob Rottersman, an industrial hygienist and health sciences principal with Ramboll US Consulting, completed a PV 29 study for the Color Pigments Manufacturers Association (CPMA) in 2021 and found EPA’s conclusions to be incorrect.

“Bottom line is I think the EPA made substantial errors in their risk assessment and, between the lines, have admitted it but are not changing it,” Rottersman told Repairer Driven News.

“They assumed a particle size of 43 nanometers, which was based on information provided to them regarding the primary particle size — the Pigment Violet 29 broken down to its smallest possible particle. In nature, the particles will not exist like that. They will agglomerate and form much larger particles. …They also used a sampling methodology that would be inappropriate for nanosize particles and it had a very high limit of detection so the end result was …they couldn’t really use their data from the exposure assessment study.”

Rottersman looked primarily at particle size in his study, but also collected some information on exposure data. Production of PV 29 is a batch production process, which Rottersman compared to baking a cake — “you do something, you add an ingredient, you put it through the process, you walk away, you do other things, and you come back in a few hours — maybe a day or two later — and you do something more.”

“It’s not standing on an assembly line or production line so the workers are moving around; they’re doing other stuff,” he said.

EPA’s sampling methodology couldn’t differentiate between PV 29 particles or other airborne dust particles, Rottersman said, so they only took samples when PV 29 was being used and in short durations. Therefore, “the detection limit goes up so almost all of their data was less than the detection limit,” he said.

Because of that, EPA went back to one data point from a previous study on total dust, regardless of particle size, for someone who “worked in the facility but the report does not mention that they even handled PV 29,” Rottersoman said. “They then used that one data point as the highest potential exposure to calculate their toxicological profile.”

He added that EPA’s high-end exposure concentration data came from one sample, which he called “flimsy” and “inappropriate.”

EPA also assumed workers would be exposed to PV 29 for 10.5 hours a day for 190 days a year for 40 years. “We know that they’re only producing a limited number of PV 29 batches per year,” Rottersman said. “They work around it for a few hours at a time and a few days per batch… They’re [EPA] assuming an incredible accumulation of exposure that just doesn’t exist.”

In his study, Rottersman assumed seven to eight hours of “pack out,” time when bags were being filled with PV 29, as the worst-case scenario for exposure. At the time of pack out, if EPA’s particle size assumption was correct, the instruments would have shown increased airborne concentrations in the range that includes 43 nanometers but they didn’t, he said. In fact, there wasn’t an increase in airborne particles of that size during pack out.

“What this shows is that Pigment Violet 29 does not exist in the size range that the EPA is saying it does,” Rottersman said. “The average particle size is somewhere between one to three microns, closer to three. …For something with this broad of an implication to the industry — to do a study with this many flaws and rely on this type of work for their conclusions — is unfortunate.”

Earlier this year, CPMA and the Society of Collision Repair Specialists (SCRS) asked EPA to reconsider its regulatory action. Opposition was also voiced by the Alliance for Automotive Innovation (AAI) and the American Coatings Association (ACA). SCRS, CPMA, and others were asked to serve as Small Entity Representatives (SERs) to the Small Business Advocacy Review Panel (SBAR Panel) for the EPA’s regulatory action, “Colour Index Pigment Violet 29 (PV29), Rulemaking under TSCA Section 6(a).”

On Tuesday, SCRS Executive Director Aaron Schulenburg told RDN that engineering controls and PPE protocol already in place at repair facilities “would otherwise reduce the risk assessment within our facilities.”

“Collision repair professionals already utilize controlled environments for paint application and task-specific respirators, masks, filters, and options based on activity, contaminant, and concentration levels,” he said. “Testing could verify reduced or eliminated risk when such safety mechanisms are in place, and to not make an assumption that environment controls and PPE are being used in compliance with other agency requirements, fails to consider worker exposure in professional work environments.

“During the consultation process with EPA, SCRS was unable to find any study that indicated nanoparticle exposure of PV29. At that time, we were of the belief that no testing had been done at the collision center level that proved that nanoparticles of PV29 are present. EPA has communicated in their updated findings that they have not conducted additional new scientific analysis on this chemical. SCRS remains firm in its position that EPA should perform more conclusive testing before pursuing implementation of any rule.”

EPA said in September its next steps will include taking public comments on “a risk management action to address the unreasonable risk identified in the risk evaluation, as updated with the final revised risk determination.”

“EPA’s proposed regulation could include requirements on how the chemical is commercially used, or limiting or prohibiting the manufacture, processing, distribution in commerce, commercial use, or disposal of this chemical substance, as applicable,” EPA said.

All documents associated with EPA’s final risk determination can be viewed here.