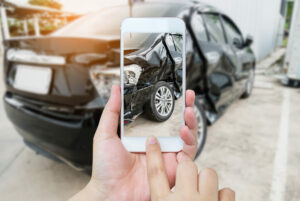 The automation of the auto claims process is “not as close to complete as the industry once thought,” and “manual appraisals and human judgment remain key to the estimating process,” Mitchell’s parent company, Enlyte, says in its 2022 Annual Trends Report.

Full automation should be considered “a long-term goal,” as AI-enabled claims handling strives to live up to the hype that has been built up around it, Olivier Baudoux, Mitchell’s senior vice president for global product strategy and artificial intelligence, says in Chapter 4 of the report, titled “Claims Automation: Separating Fact From Fiction.”

Jack Rozint, senior vice president of repair sales for Mitchell, told Repairer Driven News that Mitchell “very firmly” believes in the use of AI in the estimating process, which he called “very viable and very promising.”

The message for those who are disappointed in the technology’s failure to live up to unrealistic expectations, he said, is “hang in there — it’s doing well, and there’s lots more good stuff on the way.”

While the pandemic has accelerated advancements in straight-through processing [STP], “there is still work to be done to deliver on the promise of a no-touch claim,” the report says. “As an industry, we are just beginning to reconcile initial expectations with the current state of the technology.”

The report views changing expectations for the technology through the Gartner hype cycle, a graphical presentation developed, used and branded by the research firm Gartner to represent the maturity, adoption, and social application of specific technologies. On that curve, the report says, expectations lie between Phase 3, disillusionment, and Phase 5, mainstream adoption. 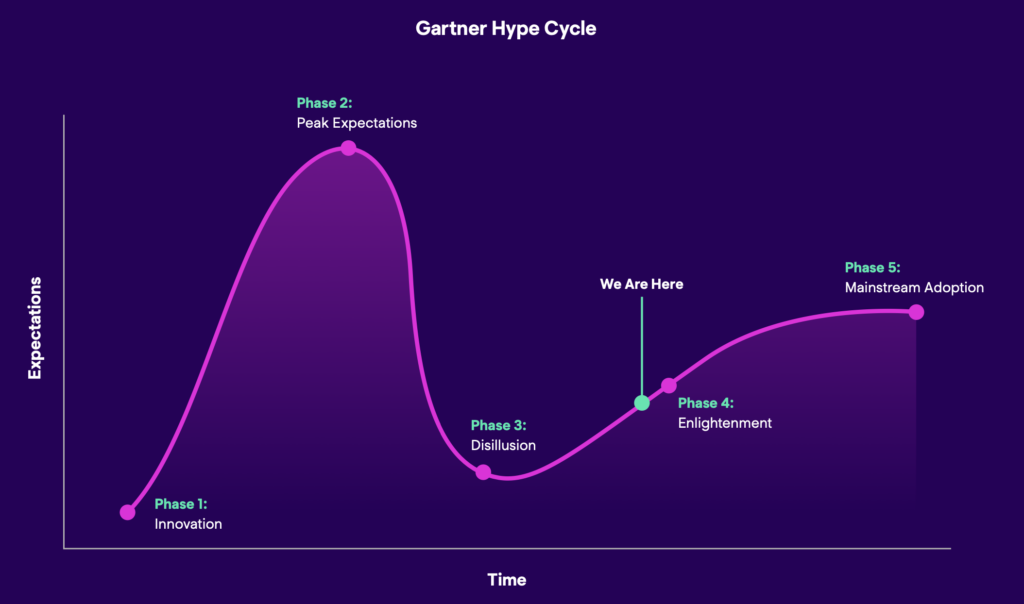 “The key to this phase is realizing what is possible and how to put technology to use in situations that bring the most value,” the report says. Two areas where that applies, it says, are the creation of estimates, and triaging and automating total loss claims.

The report seems to support concerns long expressed by the collision repair industry. Wired magazine looked at the issue of photo-based estimating in April 2021, and found one overarching complaint among shops: Damage detectable by an in-person human appraiser is overlooked in photo estimating.

“Although STP is a fundamental goal and certainly the long-term vision, it is just as important to realize that manual appraisals and human judgment remain key to the estimating process,” the report concludes. “For severe accidents or claims related to the newest vehicles, appraiser involvement still yields tangible business benefits,
like preventing cost leakage. Therefore, optimizing the core estimating solution to enhance the user’s experience continues to be a priority. This may include surfacing the right photos at the right time, engaging an appraiser when there is ambiguity in the part selected, or even prompting a ‘real’ person to confirm what the machine may not be certain of.”

The report notes that, while 97% of auto insurers surveyed acknowledge the value of STP, only 10% are making significant use of the technology, and less than 25% of global organizations have developed an enterprise-wide AI strategy.

As AI’s shortcomings became evident, “claims automation sentiment went from hopeful to hopeless,” the report said, with many organizations scaling back their STP investments from operational objectives to research and development projects. “They lost faith in touchless estimating and, instead, began to focus on more straightforward and realistic use cases for AI—such as triaging a claim or simply reviewing an already-written estimate (including for subrogation).”

LexisNexis Risk Solutions, which not long ago reported that 79% of auto insurance carriers were open to the idea of touchless claims, now predicts that telematics data and AI will lead to 60% of claims triaged through automation by 2025, the report says.

“[W]ith only half of non-injury claims predicted to be fully automated by 2025, it is now considered a long-term goal,” it says. 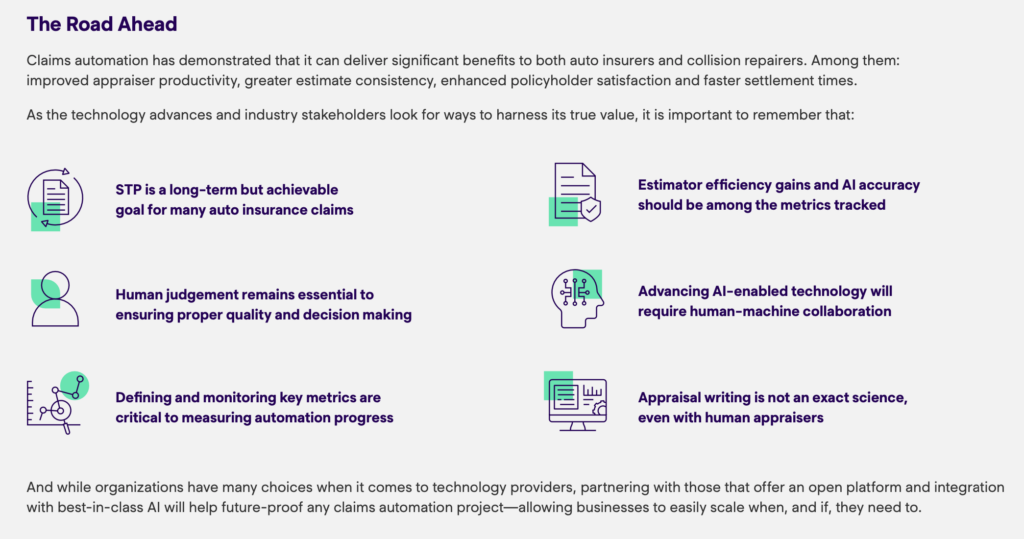 Mitchell’s report acknowledges some of the ways in which AI-powered estimating has come up short, but notes that advances are being made in a number of areas.

For instance, “if you cannot decode a vehicle identification number (VIN) and uniquely identify the model’s options, how can you accurately predict what parts to repair or replace? Are you putting a bumper with sensors? What about headlamps? And if the part is made of a special material like aluminum, how should the repair plan differ?”

Although AI could recognize the “most important” vehicle components, it became clear that “it needed to learn hundreds or even thousands more,” the report says.

AI also has lacked the ability of human appraisers to contextually review all available photos before making a decision, or to analyze multiple photos to determine unrelated previous damage. On the other hand, human appraisers are “not ready to embrace” their new role in reviewing and approving pre-written estimates generated by AI, the report says.

Experience has shown that “while automation is designed to make settling claims easier, it was clearly not capable of replacing human appraisers,” the report says.

Mitchell contends that progress has been made in a number of areas. It says its own AI solution, Mitchell Intelligent Damage Analysis (MIDA), can now predict more than 300 internal and external parts, as well as provide recommendations for operations such as repair and replace, remove and install, and refinish and blend. Those are “consistent with OEM repair procedures,” Rozint confirmed.

MIDA is also capable of decoding VINs, for the most part, by combining vehicle information with AI. “For touchless estimating to produce an accurate appraisal, vehicle, repair and historical claims data are critical,” it says.

Recycled and aftermarket parts have been incorporated into the system, and AI is now able correctly identify the primary point of impact, as well as distinguish any unrelated prior damage.

On those metrics, MIDA has shown increases of 16% in the percentage of estimate lines correctly auto-populated, 26% in parts properly recognized, 12% in correct identification of damaged parts, and 8% in repair and replace labor operations accounted for.