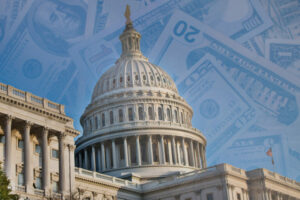 The Society of Collision Repair Specialists (SCRS) joined 44 other entities in a letter released Monday addressed to U.S. House Reps. Adrian Smith (R-Neb.) and Michelle Steel (R-Calif.) indicating “strong support” for the Family and Small Business Taxpayer Protection Act, or HR 9092. The bill was introduced by Smith in September.

The Dec. 5 letter states in part that the coalition appreciates that the bill directs the Internal Revenue Service (IRS) to “spend resources to help and serve taxpayers” instead of focusing on audit enforcement and penalties.

Smith introduced the bill in response to the Inflation Reduction Act (IRA) passed earlier this year. In August, a similar coalition including SCRS and more than 70 other national organizations undersigned a letter addressed to House and Senate leaders stating opposition to the IRA.

In that letter, the coalition wrote that it is “disheartening that Congress would earmark $45.6 billion (58%) for enforcement efforts while only providing $3 billion (4%) for taxpayer services from the $80 billion allocated to the IRS in the Inflation Reduction Act of 2022. Before considering how to penalize taxpayers, the agency should address the immense backlog facing the agency and how to better assist taxpayers with compliance.”

The August letter states in part that the IRA “does nothing to address” immediate issues such as record-high inflation levels, two consecutive quarters of negative economic growth, and a shrinking small business sector, even as it increases the tax burden on U.S. small and family-owned businesses.

“The savings are all backloaded,” Reardon said in August. “The spending is in the front so if anything, at best, it’s going to be neutral on inflation.” Reardon said studies conducted by Penn-Wharton, the Tax Foundation and the Congressional Budget Office suggest the IRA might actually increase inflation in the short term.

Small businesses across the U.S. are reporting problems with inflation affecting their bottom lines. National Federation of Independent Businesses (NFIB) spokeswoman Courtney Titus Brooks said 33% of NFIB-member businesses reported that inflation was the single most important problem in operating their business over the past year. She told Repairer Driven News that the legislation’s heavy focus on enforcement rather than resolving the IRS’ backlog of “millions” of unprocessed paper tax returns “is a disservice to small businesses and taxpayers.”

According to the NFIB Research Center’s COVID-19 survey in March, 22% of members surveyed said they have attempted to contact the IRS in the last 12 months regarding their business’s tax return information. Of those, 64% reported that the experience was not helpful. Titus Brooks said the lack of helpful interaction between the IRS and small business owners is “discouraging.”

For small and family-owned businesses, the record-breaking inflation is taking a toll. Mandi Roberts, office manager for Tim and Jerri’s Auto Sales in Garden City, Kansas, told Repairer Driven News that inflation has impacted every part of their business over the past year, from used car prices to mechanic services.

“One big thing is simple oil changes,” Roberts said. “We’ve had to raise the cost of those by $20 in the past year, and some people were upset by that. We also have to be more careful about the vehicles we purchase to put on our lot, so we make sure we’re not going to be upside-down on it when we sell it, which is a challenge we’re facing now.”

Roberts is also a saleswoman for the business, which her father and mother have owned and operated in southwest Kansas since 1993. She said the margin her family is making with their car lot is “lower than we’d like it to be” this year. Her family has a close relationship with many of their customers, and Roberts said rising inflation has led to some frustrations with financing.

“For example, within the past year we had a younger gentleman come in, and he qualified for a pickup that had a lot of miles on it,” Roberts said. “The high mileage meant the bank would only schedule payments so far out, so the cost of the truck was inflated because of that.”

Roberts said inflated prices of used cars have been a “huge issue” for her family’s business, but she’s now seeing those prices beginning to retreat.
“We’re hopeful it’ll even out soon,” Roberts said.

The bill states that buyers of certain used clean vehicles would receive up to $4,000 or 30% of the sale price back in tax credits. However, the bill also indicates a tax credit limit of $3,750 per vehicle. Qualifying commercial vehicle owners would receive a $7,500 tax credit.

The House Ways and Means Committee will consider HR 9092 when lawmakers reconvene Jan. 3.