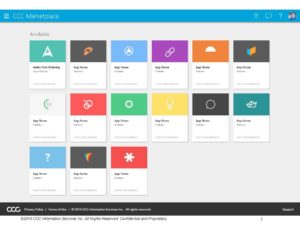 While not naming the information provider by name, the Collision Industry Conference on Tuesday announced a task force to examine CCC’s recent announcement regarding Secure Share and the EMS and BMS data standards.

The new “Open Systems, Data Access and Sharing Task Force” will hold a 90-minute forum at the April 19-20 Pittsburgh CIC.

“The panelists will include companies, organizations and collision repairers that will be affected by the new BMS announcement and they will discuss how it affect their individual businesses and the collision industry in general,” CIC wrote in a news release.

The two standards allow collision repairer- and insurer-focused software like the estimating services to “talk” to other shop business partners’ software. BMS is modern (XML), more efficient and better at protecting personal/business data (and under CCC, it’ll be 128-bit encrypted too). EMS is archaic (typically dBase IV) and no longer supported by CIECA, which created both standards and continues to refine the BMS standard for anyone in the collision repair ecosystem — and there are some — that use it.

Recognizing the technological difference and industry demand for BMS, CCC will launch what it calls Secure Share to facilitate exchanging those messages. Under Secure Share, shops will use a kind of “app store” to designate the vendors they wish to receive segment-specific BMS data and add other filters to what is or isn’t transmitted as well. Vendors who wish to receive that information will have to pay a per-workfile fee of $0.50 starting in April 2018, and for those who register after 2017, potentially a one-time fee of $2,500 for the API to get their existing software to interface with Secure Share. CCC Vice President of market solutions Mark Fincher on Wednesday clarified that when the one-time fees do go into effect, a company with multiple programs will only have to pay $2,500 once — not once per “app.”

Several concerns have been raised over the plan. Two involve the $0.50-per-repair order fees, which critics argue will either be passed on to repairers or eaten by vendors — some of which compete with CCC — and have a multimillion-dollar impact on the industry economy. There’s also the change in control — shops and vendors will likely have to use CCC Secure Share to exchange data rather than do so independently using uploads and data pumps.

CIC noted that a poll of the audience at the January gathering found 94 percent agreeing that a “‘for profit’ private equity driven company will be tempted to generate excessive profits and/or prevent competition through the use of data generated via an industry standard.”

The CIC audience in January also voted that CIC should convene a task force to study and generate a position statement on the subject.

The informal polls followed a highly critical presentation by Frank Terlep, a former chairman of the Collision Industry Electronic Commerce Association which created both data standards and now the CEO of eMarketing Sherpas. (See slides here.)

Terlep, whose company would have to either absorb or pass on the 50-cent fees, did not mention CCC by name either in January, but the impetus for the talk was fairly obvious. The CIC news release summarized many of Terlep’s arguments and presented one of his slides (shown below). CIC wrote:

Going through the pictorial representations of data flows … he surmised that about 22,000 shops’ EMS data will flow through a BMS system of one company and effectively create a spigot of which through all vendors and users will be funneled, and at a cost to all third-party developers or all those who interface to the system. Any 3rd Party company that wants to use the new BMS API will need to spend time changing their existing EMS based integrations! This could cost the industry tens of millions of dollars and delay other development and projects and the cost of doing business for shops and all other affected parties goes up.

As other potential ramifications, Terlep offered the following:

Asked about the CIC announcement, Fincher said Wednesday that CCC had offered to meet with the task force to address its concerns but had not heard from the body.

“We have not been invited to participate on the task force,” Fincher said. Asked if CCC would be open to talking with the group at the April CIC, he indicated antitrust factors wouldn’t allow it and cited the company’s statement provided to Terlep for the January presentation.

Our counsel generally advises against participation in such meetings without appropriate antitrust controls applied, which may significantly limit the topics discussed.

As such, we respectfully decline the invitation to participate. Hopefully, the specifics of the program set out in our press releases and website serve to provide the necessary information to fully understand the program

“We have antitrust concerns around discussing price,” Fincher said. “… I think this is all about price.”

He acknowledged other concerns, but said “a lot of the discussion centers around price.”

Fincher has said the cumulative impact of the 50-cent fees won’t be anywhere near that estimated by critics and called them necessary to cover CCC’s cost of the Secure Share infrastructure.

The company had since September been open about its plans and to feedback, Fincher said.

“It’s disheartening to continue to see the misconceptions that exist six months later,” he said.

It’d already acted on suggestions and refined which messages were sent and not sent to specific industries.

Fincher also took exception with the idea of “data dripping” in the slide shared by CIC and Terlep, which he said  “could not be any more inaccurate.” “It also opens up the flow of data,” by letting companies connect with numerous shops without having to install and support data pumps, Fincher argued.

“They can now connect easily,” he said. Companies will lower development costs and can scale apps more effectively, and “it invites new entry,” according to Fincher.

Asked why CCC was providing BMS to insurers now but charging to disseminate this information, Fincher explained that those transmissions were part of individual custom interfaces built to each company’s demands.

“I can assure you that there are commercial terms” involved, he said.

These are fixed and one-off platforms, he said.

Fincher said this system was “on track” for its April 4 launch, when repairers will be able to start exporting BMS or EMS messages to their various business partners.

He said Secure Share had “well over 30” unique companies in various stages of registration. “A good portion of them” have multiple apps — including one company which has eight programs planned.

“There are some that are anxious to get going right away,” Fincher said. Some companies have multiple products.

Some big guns remain absent, but Fincher said CCC has been having “productive” talks with them and anticipates “more and more app providers” would join through the April 2018 sunset of EMS.