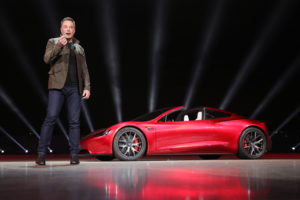 Gredinberg said he gets many requests about Audatex, and “one of the biggest questions” surrounds how it develops its labor times.

Users can actually see a detailed list of what was included within the time by selecting the “Estimate Report” option within Audatex and then choosing “Labor” from the “Document to view” drop-down.

The Labor Report is specific for each vehicle and includes, according to Audatex DBRM Section 2-3:

• the guide number where any overlap has been considered

• the full labor of the panel before overlap consideration

• all operations that may be applicable for a specific estimate (Minor formatting edits.)

Gredinberg said it was valuable when comparing estimates written in Audatex and in one of the other two estimating systems, neither of which provide so clear a breakdown.

He demonstrated the system using a three-line estimate for a supercharged 2018 Land Rover Range Rover: remove and install the front bumper cover (2.5 hours), R&I the engine cradle assembly (8.1 hours), and R&I the engine and transmission (10 hours). 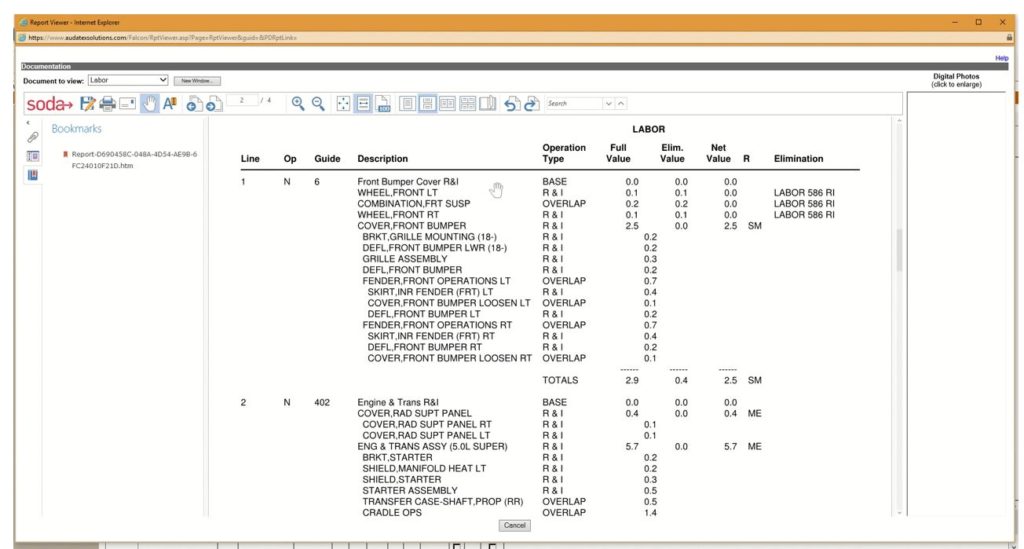 By selecting the Labor Report, “that three-line estimate quickly turned into an expanded-view breakdown” with numerous of line items showing base labor times, what R&I is included and any overlap considerations. That simple bumper cover R&I item now includes more than a dozen elements of disassembly and overlap Audatex factored into the 2.5-hour result.

“This labor report has a lot of great information,” Gredinberg said.

Repairers now can see Tesla labor times regardless of estimating system. The DEG reported earlier this fall that Tesla times have officially come to Mitchell.

Audatex announced Tesla exclusivity in 2015, though it wouldn’t disclose the length of the contract. CCC received Tesla times and upgraded VIN decoding in 2017, the DEG announced in a tip that year.

Mitchell in May 2017 confirmed it was in talks with Tesla as well. In October, the DEG reported the information provider’s success.

However, it warned that “this is not an approval for every body shop to work on Tesla Vehicles.” 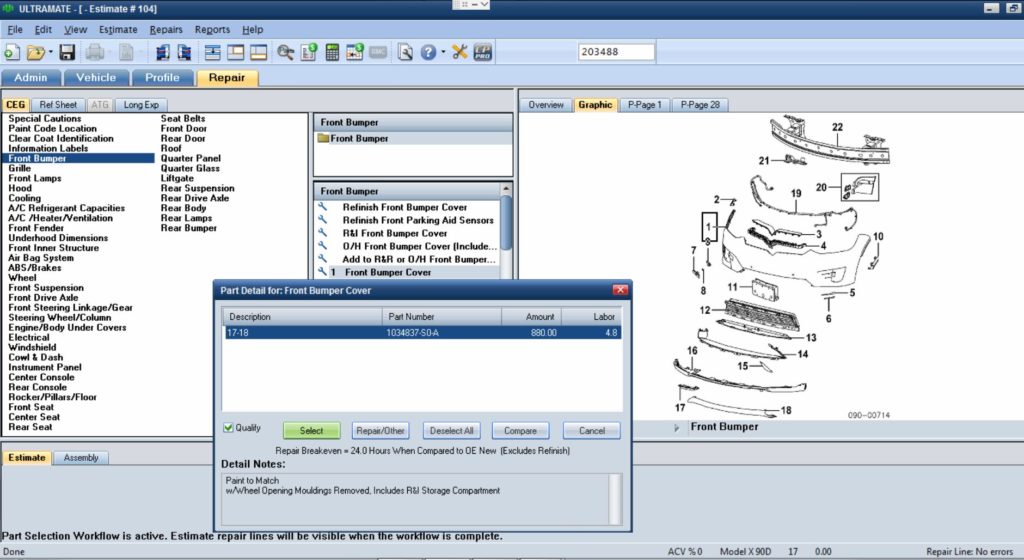 “Non Approved Tesla body shops should still check with Tesla parts departments for part restrictions prior to working on vehicle as well as understanding the dangers and risk involved working with high voltage systems,” the DEG continued.

The DEG also advised that “parts are updated frequently” and directed users to confirm current part prices and numbers with Tesla itself.

“Please submit DEG inquiries for any missing or outdated information for Tesla Database in MITCHELL,” the DEG wrote.

The issue arose in September DEG inquiries for a 2011 Volkswagen Tiguan wagon and a 2018 Toyota RAV4.

In the Tiguan inquiry, the user had complained about their inability to apply R&I labor time to the quarter panel glass itself, even manually. They suggested ditching the sealant labor time and add it to the glass R&I itself.

“There should never be labor time associated with the ‘sealants’ on any models,” the user wrote. “This screws up the reporting.”

The RAV4 inquiry raised a similar concern about the labor sticking to the sealant line item rather than the glass.

“This causes issues since we commonly see the adjuster always zero out the labor for the glass sealant and not realizing this the actual labor for the 1/4 glass,” the user wrote.

They too suggested removing a value from sealant and applying the time to the glass.

“The Glass sealant is not even an OEM Part, so a labor time should not exist on NON OEM Components in the database and no labor should ever be applied to a ‘consumable’ product used to Bond a component of the vehicle,” the user argued. 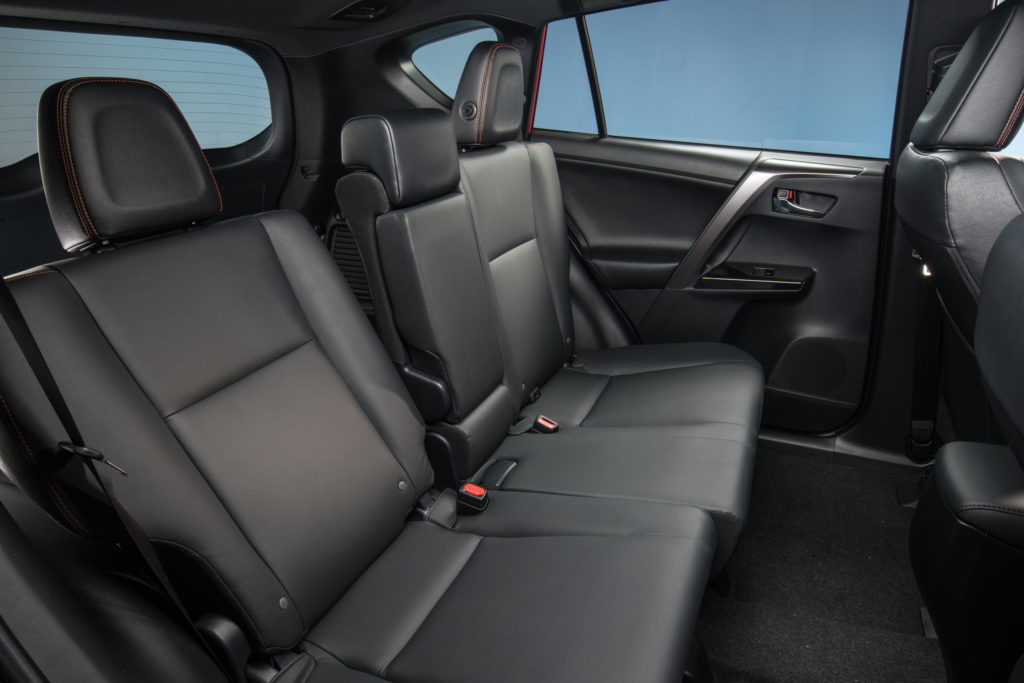 Audatex declined to change its estimating system. It explained to both users:

In Audatex, when a user adds both aforementioned items to an estimate, the system allocates the labor to the lowest guide number after any applicable overlap is applied. This guide number hierarchy is integrated into Audatex labor development. Estimator judgement times or manual entries will not remove preexisting overlap deductions where labor economies between multiple parts have already been considered. This is the normal function of the Audatex Estimating system. No change warranted at this time.

The DEG wrote that users could tell if the “Quarter Glass Sealant Kit” time was by modified by looking for an asterisk.

The DEG in October posted a handy cheat sheet dictating what is and isn’t included on operations related to seam sealers and protective coatings on welded panels.

As with many items on estimates, the majority of operations weren’t included by any of the three systems. But the chart demonstrated that some discrepancies do exist on the 17 items it tracked.

Mitchell and CCC were fairly close together on procedures, according to the DEG chart. However, Mitchell includes the time to clean up glass adhesive, while CCC doesn’t. (Neither does Audatex.)

Audatex, however, includes two item the others don’t — applying weld-through primer and feather, prime and block on replaced welded panels — and doesn’t include three of the procedures both CCC and Mitchell do.

Another DEG cheat sheet posted in October is much more clear-cut. It shows that key scanning and calibration items aren’t included on any of the three estimating systems.

So that one should be pretty easy for insurers and repairers to remember.

“Many OEMs recommend a pre- and post-repair diagnostic scan on all vehicles involved in a collision that could reveal pre-accident or accident-related damage,” CCC writes in its P-pages. “Please refer to OEM position statement and repair procedures for more information.”

It elaborated further in an October update, adding: “Due to the variety of scan tools used, both OEM and aftermarket, as well as the variation from vehicle to vehicle and repair to repair, MOTOR is unable to develop a time that accounts for these different scenarios. Therefore, MOTOR recommends an on-the-spot evaluation to determine an appropriate estimated time to perform diagnostic scans for each repair.”

The next-generation Tesla Roadster is revealed in 2017. CEO Elon Musk is at left. (Provided by Tesla)

Audatex users can actually see a detailed list of what was included within an Audatex labor time by selecting the “Estimate Report” option within Audatex and then choosing “Labor” from the “Document to view” drop-down. In this Database Enhancement Gateway screenshot from Audatex, a three-item estimate was expanded in the Labor Report to show the dozens of operations Audatex incorporated within each line’s time. (Audatex screenshot provided by Database Enhancement Gateway)

The Database Enhancement Gateway in fall 2017 reported that Tesla times have officially come to Mitchell. (Mitchell screenshot provided by the DEG)

Quarter-panel glass on a 2016 Toyota RAV4 SE can be seen. The 2018 RAV4 is from the same design generation and should have the same glass setup. (Provided by Toyota)

The Database Enhancement Gateway in October 2018 posted this cheat sheet dictating what is and isn’t included on operations related to seam sealers and protective coatings on welded panels. (Provided by the DEG)

The Database Enhancement Gateway in October 2018 posted this cheat sheet dictating what is and isn’t included on operations related to scanning and calibration. (Provided by the DEG)