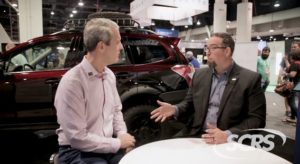 Decisely CEO Kevin Dunn said late last year that employers who realize savings from switching to an association health care plan tend not to “pocket it for profitability.”

Instead, they opt to put the money back into their employees, such as by covering more of the cost of the premium, or they expand the coverage offered to items like vision, Dunn told Society of Collision Repair Specialists Executive Director Aaron Schulenburg during a SEMA interview captured in a Dec. 18 video.

“They don’t just take it (the money),” said Dunn, whose HR services firm is partnering with SCRS to offer members association health and retirement plans. The concepts — allowed by the federal government under a Trump administration decision — allow members of trade groups to join forces and leverage their collective buying power to get the kind of deals available to a large, monolithic business.

Get enough small businesses together, and the collective looks like a major company like UPS or Delta, according to Dunn. The group gets the discount a health insurer would float to win the volume of a single company of the same size.

Dunn agreed with Schulenburg’s comment that the average health care savings for similar markets to SCRS’ was 10-30 percent.

Other employers who weren’t able to offer health care at all because of the cost are now able to do so with the less expensive association health plans, and there’s “excitement,” Dunn said.

The same applies for association retirement plans, Dunn said. Employees saving money “redeploy it” in their employees, perhaps for example matching an employee’s retirement contribution up to 6 percent instead of 4 percent, he said.

Schulenburg said companies who do offer benefits have reported “‘I would do more in that area'” if they could afford it.

Offering benefits to employees at all, to say nothing of getting those benefits into the range of a competitor, could be crucial to hire and retain technicians in a tough collision market.

Dunn said small businesses haven’t been able to afford health care as a benefit for a long time, and 40 percent of small companies don’t insure employees at all.

“It’s just unaffordable, or it’s confusing, or they can’t find the right network. and so everyone goes out on their own,” he said.

Schulenburg said when SCRS representatives talk to every member or potential member stopping by the trade group’s SEMA booth about the idea of benefits like health care, the visitors’ “eyes just open up so wide” when the opportunities are discussed.

Technically, association health care plans have been around for more than 30 years, Dunn said. They get a “bad rap” sometimes because of issues like failing after not being properly funded.

However, there’s a “whole different ballgame now out there,” and while he understands the anxiety, “it’s different today,” according to Dunn. Decisely, for example, creates “fully insured” health plans, not those where members buy in with a fee based upon losses, he said.

Schulenburg said SCRS was impressed that Decisely shared its vision of better coverage and high-quality options which weren’t watered down, and with price savings coming from leveraging size rather than compromise on what was delivered.

Decisely also can offer employers options, according to Dunn. He gave the example of a hypothetical shop owner with four employees who doesn’t want to go the fully insured route but instead wants to create and seed health savings accounts for his staff. Decisely can set that up too.

Offering a retirement plan, even as a small business, introduces liability upon a shop, according to Schulenburg — something a repairer might not realize. Dunn said even businesses that might be aware of the liability might lack the time to examine the issue properly during the hectic business year; with an association plan, they don’t need to take as much time, he said.

Schulenburg said a survey of membership conducted with Decisely found the average member business had around 14 eligible employees, but even some independent repairers had more than 100 eligible employees. For those larger companies, one’s existing buying power might help reduce fees and liability, but it doesn’t save the shop the annual audit costing $10,000-$15,000 required at larger sizes, he said.

However, the association retirement plan lets those companies pay less by spreading the audit cost around the larger pool of employers, according to Dunn..

In this vein, Dunn said no company was too big or too small to at least investigate the prospect of joining an association benefits plan. Larger companies will save more in a “one-time pickup,” and smaller companies could be more competitive in a tough job market.

He encouraged SCRS members to certainly investigate the association health plan concept and understand that they needed to provide something to employees.

Even if it wasn’t a full-blown health plan, the act of contributing something like $100 was “still something,” he said.

Dunn also warned repairers not to forget about part-timers, noting that they allow the full-time staff to have vacation.

“You want to make sure that they’re happy as well,” he said.

Competing with the market

Though smaller auto body shops aren’t required by the government to provide the benefit or pay a penalty (that provision starts at 50 full-time employees), collision repair business owners may have to offer health insurance simply to attract and retain technicians.

Around 70 percent of shops in 2016 offered health insurance as a benefit, according to an I-CAR-Collision Repair Education Foundation study. That’s a drop from the approximately 80 percent three years prior. (Less than three percent of auto body shops offered no benefits at all in 2016, I-CAR and CREF wrote.) Less than 60 percent of collision repairers surveyed offered retirement as a benefit in 2016, according to an I-CAR-Collision Repair Education Foundation study. That’s a little less than three years prior.

Retirement and health care could be increasingly attractive to an industry that appears to be graying.