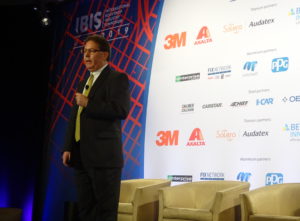 Repair quality and customer experience were GM’s other two considerations, Turvey told the audience at the International Bodyshop Industry Symposium in San Diego.

The automaker last year unveiled requirements and plans for its certified collision network.

Echoing fellow Detroit OEMs FCA and Ford, Turvey cited the threat of customers switching automaker brands after an incorrect repair — illustrating this point by noting that brand defection after 12-18 months was already “phenomenal” even when the repair was right.

Customers are going to bail naturally, particularly if it’s a serious impact, he said.

If a vehicle is a total loss, the customer by default probably needs to buy a car. GM also wants to have a “handoff” — an opportunity for its dealerships to sell that car to the customer, Turvey said.

This calls to mind a promotion described in May 2018 by Nissan certified collision growth planner Sara Balog. According to Balog, total loss customers who patronized certified auto body shops could get a discount on a new Nissan. The shop would see an alert in OPSTrax or TraxPod that a special Nissan offer exists, she said.

“Consumers may blame the shop if their vehicle is deemed a total loss, which may negatively impact CSI scores,” a slide stated.

“… Be the hero to your customer by providing a solution and exceptional service to Nissan customers at a time of real need.”

Recognizing the OEM has a brand interest in a customer following a crash and collaborating could actually dovetail with an insurer’s own interest. (Plus, a carrier can’t keep an automaker out of the process anyway. An OEM will be the first to know about a crash through in-vehicle telematics, as Turvey’s Ford global counterpart Frederiek Toney pointed out Thursday.)

Moderator Sean Carey, president of SCG Management Consultants, said 41 percent of customers also defect from their carrier after a bad claims situation. He said 91 percent of customers in a crash viewed as potentially a total shop for both a different insurer and different car brand during the 45 days it typically takes to declare and settle the total.

Turvey mentioned that MyPriceLink helped foster dialogue with insurers. The company wanted an opportunity to win parts business, but found its prices undercut, according to Turvey. MyPriceLink addressed that issue, but it also got the attention of carriers, Turvey said. Since then, there’d been less tension, though work remained with a few insurers, he said.