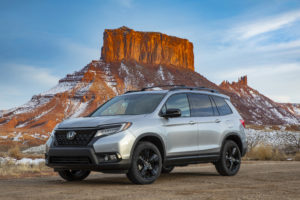 Honda brought back the Passport last month with a 2019 model made of only 38.5 percent mild steel and carrying a variety of other advanced materials.

Honda in late January said the unibody, five-passenger SUV was similar in terms of body and chassis to the next-generation 2016 Pilot and 2017 Ridgeline.

That ultra-high-strength steel includes 1,500-megapascal door reinforcement beams and and the Honda “front door outer stiffener rings” that have been a staple of recent Honda generations, according to the OEM.

The UHSS content means there’s 21.3 percent of the body you can’t section or cold-straighten, among other restrictions repairers and insurers must understand. Even some of the 34.6 percent of the Passport Honda defines as “high-strength-steel” might also carry restrictions not found on mild steel — particularly Honda’s 780-megapascal content. For that matter, even Honda mild steel of 270 MPa typically bars certain traditional repairer behavior, such as heat straightening.

Honda said it used seven steel grades on the 2019 Passport, which appears to be one more than it did in the 2016 Pilot and 2017 Ridgeline, based on Body Repair News overviews.

The highlighted two other steel body structures in a press kit Jan. 29. One was the vehicle’s “liftgate ring,” which it called “vitally important for good vehicle handling, stability and ride quality.”

The SUV also has a “3-Bone” structure” under the front of the vehicle, a feature the OEM appears to have used on the Pilot and Ridgeline too. (The 2017 Ridgeline’s is seen in the diagram below.) Restoring its functionality will be important to keep your customer safe in a future crash.

“The structure creates three different load pathways, or ‘backbones,’ that channel collision energy,” Honda wrote. “One channels collision forces from the front of the vehicle directly underneath the passenger cabin; the other two channel collision forces under the vehicle’s left and right-side frames. The result is an improved capability to safely channel energy during a frontal crash.”

Honda said the 2019 Passport came in at 3.3 percent aluminum, including a hood and a front bumper beam it said “enhances structural integrity.”

The vehicle’s 1.7 percent magnesium included a structural cast instrument panel (hanger beam) Honda says weighs 7.5 pounds less and is a better design than a steel version would have been.

Honda listed another 0.6 percent of the body as “Other,” a reference to the Passport’s composites (including inside the B-pillars) and possibly its structural foam.

“Body stiffness and therefore safety performance and NVH is further enhanced through the use of structural foam inserts in key locations,” Honda wrote. “These include the left and right B-pillar stiffeners and inside a bracket that connects the left and right-side center frames under the front floor.”

The 2019 Passport Sport’s curb weight was either 3,959 or 4,149 pounds depending on if you splurged for all-wheel drive or not. The base body-on-frame 2002 Passport LX weighed between 3,820 and 4,053. However, the 2019 Passport is longer, higher and wider and should get better gas mileage — demonstrating the kind of lightweighting Honda achieved.

The aluminum hood might make it more difficult to manufacture an aftermarket version, but this might be moot anyway given what Honda says is the closure’s role in safety.

The Passport’s hood “is designed to deform if contact is made with either an adult or a child pedestrian,” and its hinges are meant to deform to protect pedestrians too, according to Honda. It said the hood also provides enough clearance from the engine to allow that deformation.

The base of the windshield and fender mounts and supports are also designed to absorb the energy of striking a pedestrian, and the windshield wiper pivots break away, Honda wrote.

Collision repairers should also take note of other metal structural designs within the chassis of the vehicle.

Repairers also should be aware of the possibility the vehicle won’t “feel right’ if other design elements of the Passport aren’t taken into account.

“Passport’s chassis structure transmits suspension loads to the rigid body side frame, allowing for more aggressive tuning of suspension bushings to aid both ride comfort and handling precision,” Honda wrote. “The transmission of road vibration to the rear seats is also significantly reduced.

“Passport’s engine, transmission, and front and rear suspension systems are mounted on rigid steel subframes,” Honda wrote. “These subframes attach to the unit body at rubber-isolated mounting points that help keep powertrain and road noise, vibration and harshness (NVH) out of the passenger cabin. Two of the rear subframe mounts are filled with specially tuned hydraulic fluid for maximum effectiveness. Permanently sealed, they require no scheduled maintenance. The rear subframe is particularly sophisticated, with hydroformed side elements for maximum strength and minimal weight.”

Other features meant to deliver a smoother and quieter ride to the Passport’s five passengers are likely to affect the collision repair process or its severity.

The base “Sport” model is the only one lacking acoustic windshield glass, and the top two Touring and Elite grades both have acoustic front and rear door windows.

Other Passport features which might also be of interest to collision repairers include:

The 2019 Honda Passport Elite is shown. (Provided by Honda)

The 2019 Honda Passport’s body is shown. (Provided by Honda)

The 2019 Honda Passport’s front suspension is shown. (Provided by Honda)

The 2019 Honda Passport’s rear suspension is shown. (Provided by Honda)

The powertrain of the 2019 Honda Passport is shown. (Provided by Honda)