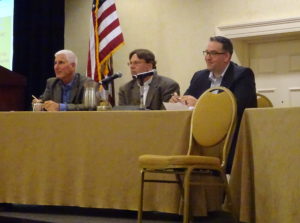 What do you call an OEM part intended for the U.S. market but sold outside of the authorized OEM supply process and/or not warrantied by the automaker? How do you communicate that to a consumer?

That’s a critical controversy facing the collision repair and parts supply industries, along with other critical stakeholders.

The Collision Industry Conference Parts and Materials Committee, which has been tackling the issue, on Thursday put the consumer-facing question to the entire inter-industry audience. Committee Co-Chairs Aaron Schulenburg (SCRS) and Ken Weiss (SSF Imported Auto Parts) described having reached an impasse, though one in which both parties were extremely respectful of the other.

“This is where we’re stuck,” Weiss said. Schulenburg said the controversy surrounded the issues of warranty and supply channel.

According to Schulenburg, the committee was in agreement on the definition of a new OEM part.

Based on the discussion Thursday, such a part met the following definition: One made for or by the OEM for the specific market that was sold through the authorized OEM supply channel, warrantied by the OEM, and still in the original OEM packaging.

But when some, but not all, of these criteria were met, should the part be communicated as new OEM? That’s the question, according to Schulenburg.

It’s clear that the stakeholders need to make a determination that works for the industry — and perhaps most importantly, the consumer who’s ultimately going to receive these parts on the vehicle.

Weiss said he took up the issue of parts classification first while working at a parts information company, desiring a definition body shops and insurers could understand and which couldn’t be abused to sell parts. In his current role at a parts importer, he has seen his wares receive different terminology depending on the parts procurement platform.

The question of what actually was being sold to repairers and consumers under terms like “Opt-OE” had arisen before but exploded in significance last year.

Following a September 2018 California BAR regulation clarifying that nebulous parts classifications like “Opt-OE” shouldn’t appear on repairer estimates — a position the BAR said it already had established — the California Department of Insurance confirmed in October 2018 that there’s no place for them on insurer estimates either. However, California also held that an OEM part warrantied by a third party could be called OEM — something the CIC discussion clearly showed to be controversial.

Schulenburg noted Thursday that legislators often don’t understand the nuances of an industry. He said the collision repair ecosystem should define the term and then work with regulators on the matter.

Collision repairers pointed to the uncertainty and liability of a part removed from what commentator Tim Ronak of AkzoNobel called the “chain of custody.” If the supplier could “absolutely remove all doubt,” it would be different, said Darrell Amberson of LaMettry’s Collision.

It’s important for the industry to understand the distinction between CIECA’s work and the Parts and Materials Committee’s.

For example, CIECA has reached consensus on codes “PAN” and “PANM” Both refer to new OEM parts sold through the authorized supply chain, provided in the original OEM packaging, and carrying the OEM warranty. A PAN part was bought normally, while a PANM part is one bought through a price-match program.

There’s value in parts supplier, procurement system provider, insurer, repairer and automaker software being able to classify and track parts with this level of detail.

“Everybody downstream” needs to have a “perfect understanding” of what they’re getting, Parts and Materials Committee panelist Ron Reichen (Precision Body and Paint) explained to CIC on Thursday.

But customer-facing communications such as an estimate might simply call both parts “new OEM.”

Developing industry consensus on such more general terminology put before consumers — and regulators — would be the task of the CIC Parts and Materials Committee.