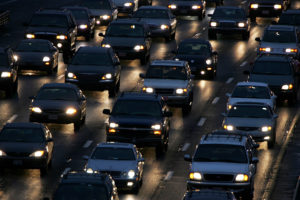 Collision repairers might fail to grasp the complexity of the seemingly simple act of aiming a headlight, a recent “Repair University” suggested.

An estimating system’s stock 0.4-0.5 hours to aim a headlight likely does not reflect the actual labor required on the vehicle, the show proposed.

Collision Hub CEO Kristen Felder pointed out some misconceptions, such as the notion of the work being “‘just a couple screws and a bracket'” or “‘if the the headlight fits, and bolts in, it’s right.'” Co-host Vehicle Collision Experts CEO Mark Olson said he often is asked if aiming is still required if the headlamp is put back “‘exactly'” where it was.

Headlight aiming is likely required after a replacement or even an removal and installation, Felder said. Sometimes, it’s even triggered by a battery disconnection — which means that a repairer working on damage to the rear of the vehicle might still have to aim a headlight, she said.

Olson said a situation could arise where the steering angle sensor must be reset for the headlight — which then demands a rear alignment on the vehicle.

Repairers needed to move away from the perception that they only need to think about headlights when they do physical work related to a lamp, Felder said. Instead, they needed to base their thought process on the actual OEM procedures.

Montanez said he recommended to shops that they quit automatically adding the “aim headlights” operation with a prompt or manually.

“It should no longer be that .5,” he said. He said they determined it was a “hell of a lot longer” on an unspecified General Motors vehicle examined by Collision Hub.

Olson said he thought the final time came out to 1.9 hours, and the car was “basic,” not an “exotic” GM vehicle.

Felder said it also wasn’t like the test required to obtain a tag proving straight headlights.

“This is almost a completely different thing,” she said.

Montanez said it was “very rare.” While a shop might have a flat floor, it might not be level, as a level floor isn’t conducive to water drainage, according to Olson.

“There’s that one poor guy at your shop that’s on a constant diet,” Felder joked.

Some companies even require the use of a rail system on the floor or a proprietary computer system to aim a headlight, according to Montanez.

Felder said that if an OEM took the time to write an aiming procedure, “there’s probably some importance associated with that headlight.”

After all, “there’s not a process to aim my taillights,” she said. Montanez agreed, noting he was sure he’d ever seen taillight assembly removal procedures of “more than a half a page.” (Shops and insurers catch a break with foglamps. Most are fixed LEDs and don’t need aiming, Montanez said.)

Aiming a headlight can demand more like a “book” worth of procedures, according to Olson. 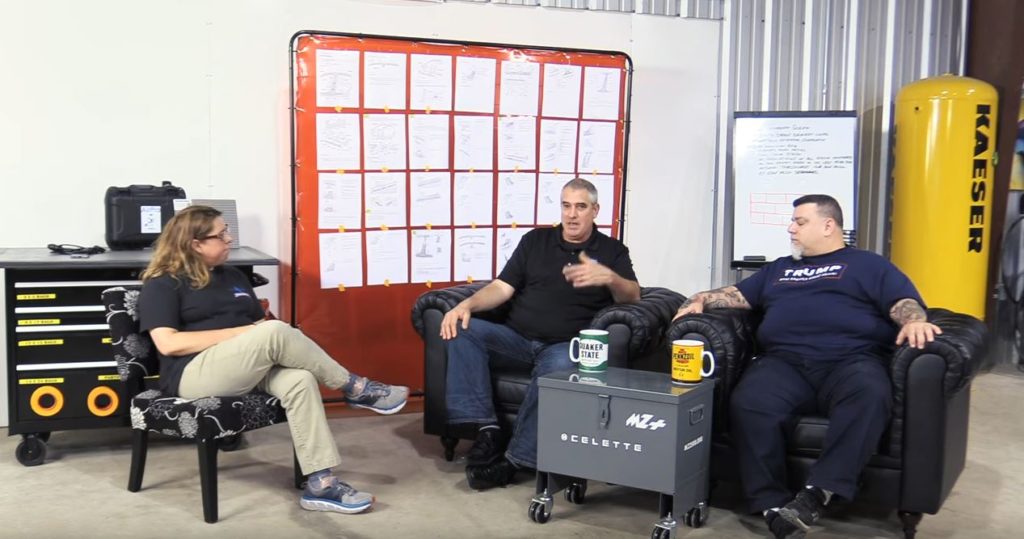 When a customer drops off a vehicle, they don’t request it be fixed like you would 30-40 years ago, Olson said. A shop could still charge 0.4-0.5 hours total like the old days, but the labor for the other operations still needed to occur, he said.

The vehicle referenced on the July 24 video might have been the 2012 Chevrolet Malibu LT featured on a 2018 “Repair University Live show.

Regardless of whether that was indeed the case, a look at some of the Malibu’s repair procedures illustrates some of the concepts presented July 24.

You must check the headlight aim “When a new headlamp capsule is installed” or “If service or repairs to the front end area have, or may have, disturbed the headlamps or their mounting,” GM writes. (One wonders if the act of a collision would also count as such a disturbance.)

The headlights must be aimed on a level surface with both enough space for the vehicle and another 25 feet from “measured from face of lamps to the front of the aiming screen,” according to GM. The shop is instructed to “paint a reference line on the floor directly under the lens of the lamps to indicate the proper location of the headlamps when they are being aimed.”

The screen itself needs to be 5 feet high and 12 feet wide “with a matte white surface well shaded from extraneous light, and properly adjusted to the floor on which the vehicle stands.”

If you don’t own a commercial aiming screen, you can also use “a vertical wall having a clear uninterrupted area” that’s 6 feet high — not the 5 feet of the screen — and 12 feet wide. “The surface should be finished with a washable non-gloss white paint,” GM wrote.

GM also provides a detailed diagram and set of requirements for the layout of the aiming area, vehicle and screen. On top of those conditions, the repairer must prepare the vehicle itself.

The Malibu must not have any “snow, ice or mud” on it, nor can it contain “any cargo.”

Nobody else can be working on the vehicle — though this is somewhat redundant as GM also demands the Malibu must already be completely reassembled anyway. (“(M)ake sure that all of the components are back in their original place.”) 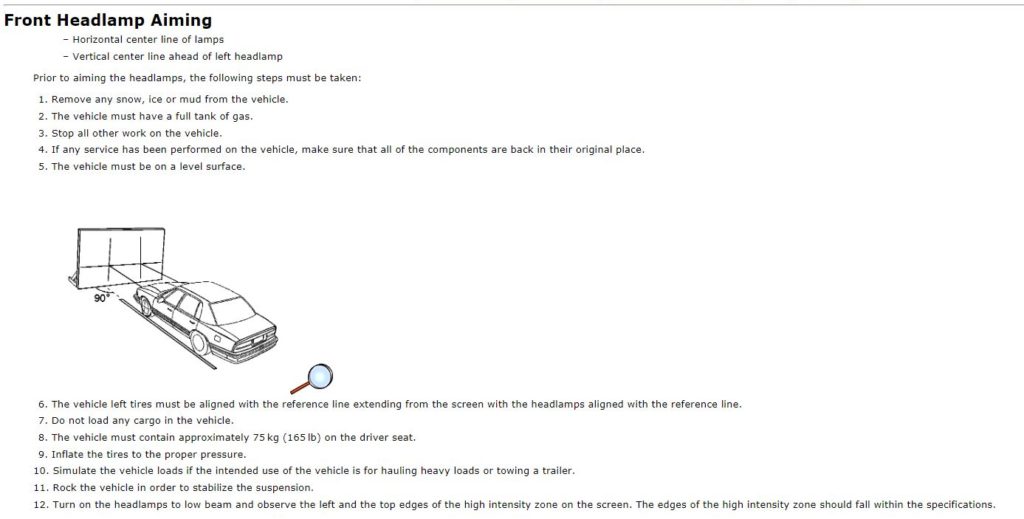 The Malibu must also have a “full tank of gas” and tires at the proper pressure. It must have about 165 pounds (not 150) in the driver’s seat — and you must also “Simulate the vehicle loads if the intended use of the vehicle is for hauling heavy loads or towing a trailer.” (Which appears to be possible with the 2012 Malibu.)

After the vehicle is properly aligned with the screen — “The headlamps can not be adjusted horizontally,” GM warns at one point — the repairer is instructed to “Rock the vehicle in order to stabilize the suspension.”

Then you can aim the actual headlights. GM provides a diagram of how that should look, though it also notes that your region’s authorities might have different rules.

If you are going to replace just a bulb, there’s procedures. Those instructions refer readers to the assembly removal instructions and a warning about halogen bulbs.

The headlight replacement/removal procedure requires some front bumper fascia fasteners to be removed, and GM refers reader to those procedures.

The headlamp fasteners carry a “Fastener Caution” associated repair procedure telling you not to substitute fasteners or add coatings like lubricants unless requested, nor should you use anything stripped. The fasteners also have a torque spec the shop must follow.

Read the rest of the relevant aiming and headlight procedures here.

Aiming does matter for safety

The IIHS has begun scrutinizing the quality of OEM illumination as a safety concern.

Their findings seem to demonstrate to insurers and shops in the aftermarket that aiming and restoring headlights matters for consumer protection.

Only half of 2018 model-year vehicles tested by the IIHS had headlights able to achieve “adequate” illumination and glare reduction, the IIHS reported Nov. 28, 2018. About half of all fatal crashes happen in the dark, “and more than a quarter occur on unlit roads,” the IIHS wrote Nov. 29, 2019.

“Differences in light source, headlight technology and even something as simple as how the lights are aimed all affect the amount of useful light supplied,” the IIHS wrote. “Properly aimed low beams light up the road ahead without temporarily blinding drivers of oncoming vehicles.”

IIHS senior test coordinator Sean O’Malley said in a Nov. 28, 2018, interview said he thought it was random whether the bulb or headlight design deserved the blame for a particular headlight’s performance. (O’Malley didn’t handle the tests specifically but was aware of them.)

Montanez also pointed out on the July 24 show that headlights themselves were more complicated. A lamp was “no longer a headlight with a separate module,” he said. It was more akin to “seven motors, four modules.”

Montanez said a lighter headlight might not contain a motor but still demanded the shop consult repair procedures. A heavy headlight really meant you needed to check procedures, he said.

Sometimes an electronic headlight must be registered, Olson said. Montanez described headlights that must undergo a learning process and be VIN-coded.

“A minor headlight R&I could be a really big deal,” Montanez said.

Montanez said some Mercedes headlights requires a small “arm” from the outgoing headlamp be transferred to the new one for the latter to work. Tossing the old headlight without keeping this part could be a problem, he said.

A major reason for the increased headlight complexity is safety. Some headlights are able to adjust the light to compensate for going around a turn or to automatically switch between high and low beams. The latter is common on higher-end vehicles, Montanez said. 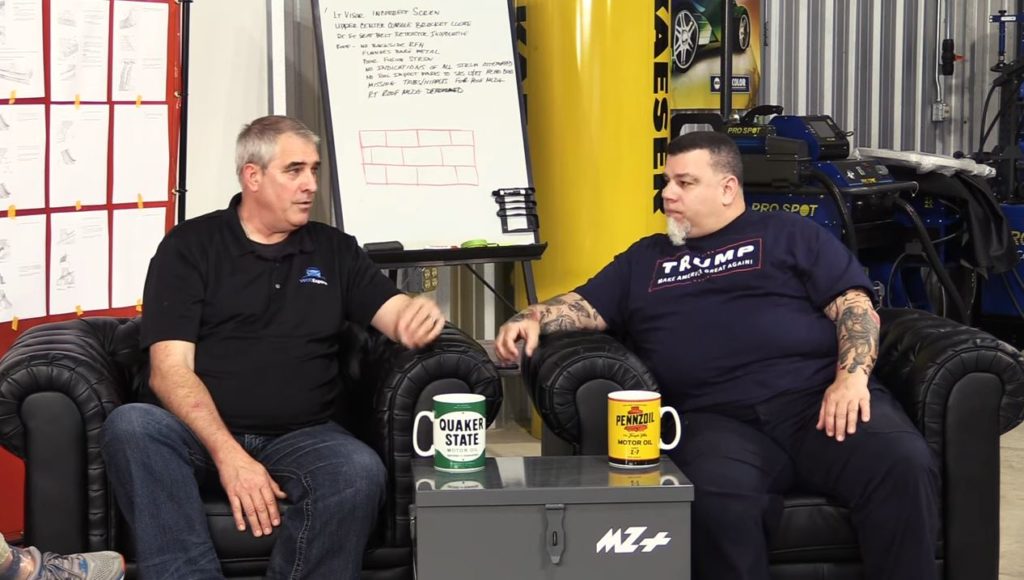 The “Repair U” broadcast also showed off what appeared to be technology available abroad but not yet approved in the U.S.: the ability for a vehicle to selectively dim parts of the headlight to compensate for other vehicles.

In January at the Detroit Auto Show, we learned how an optional lighting upgrade will deliver such tech to a 2020 Cadillac XT6.

Typically, advanced headlights on the market today and standard on the XT6 can switch themselves from high to low beams and back again to avoid blinding oncoming traffics. But should the customer have the higher-end XT6 illumination, the LED matrices will take this even further. The lights can control themselves to only dim a pattern in the shape of the vehicle in the other lane and even move that lower-beam portion to follow the other car.

The technology is legal in Canada, but NHTSA hasn’t yet approved it, XT6 engineering manager Joel Hoffman said. Asked if GM could enable the system through an upgrade immediately if NHTSA gave its blessing, he said “the ability is there,” but the OEM would have to figure out how to market it.

Montanez also on the show mentioned headlights able to compensate for weather conditions, though it’s unclear if this is another piece of technology still requiring regulatory approval.

While some of the technology on the show was on higher-end vehicles, even motorless, mundane headlights on 2012-14 vehicles still needed an aiming process including proper air pressure and a full gas tank, Olson said.

“Things turn around fast now,” Montanez said. Technology on the Mercedes S- and E-Class and BMW 7 Series will probably be in cars like a Chevrolet Cruze by 2022, he predicted.

Some of the procedures related to aiming a 2012 Chevrolet Malibu headlight are shown. (Provided by General Motors; copyright General Motors)