A CCC analyst on Tuesday said market data appears to show later-model vehicles getting into fewer crashes because of advanced driver assistance systems.

But that’s not the case for vehicles 0-3 years old in calendar year 2018 and what’s estimated to be the statistics for this year, Gotsch showed. She emphasized the 2019 year in the chart Tuesday.

“The decline in volume share for those vehicles aged 0-3 years however is larger (1.5 percentage points) for auto claims than for vehicles in use (0.6 percentage points),” she wrote. “With nearly 50 percent of MY2019 vehicles now equipped with ADAS, where ADAS has been shown to reduce the most common time of accident by nearly 50 percent, back of the envelope math suggests the difference in volume share loss is likely best explained by growing ADAS prevalence.”

A little decline in frequency on a national scale might still trickle down to a noticeable effect at the micro level. A smaller shop living repair order to repair order, a larger shop depending on volume to compensate for a thinner margin, and a piece-rate technician awaiting their next vehicle all might be affected by minor frequency drops. 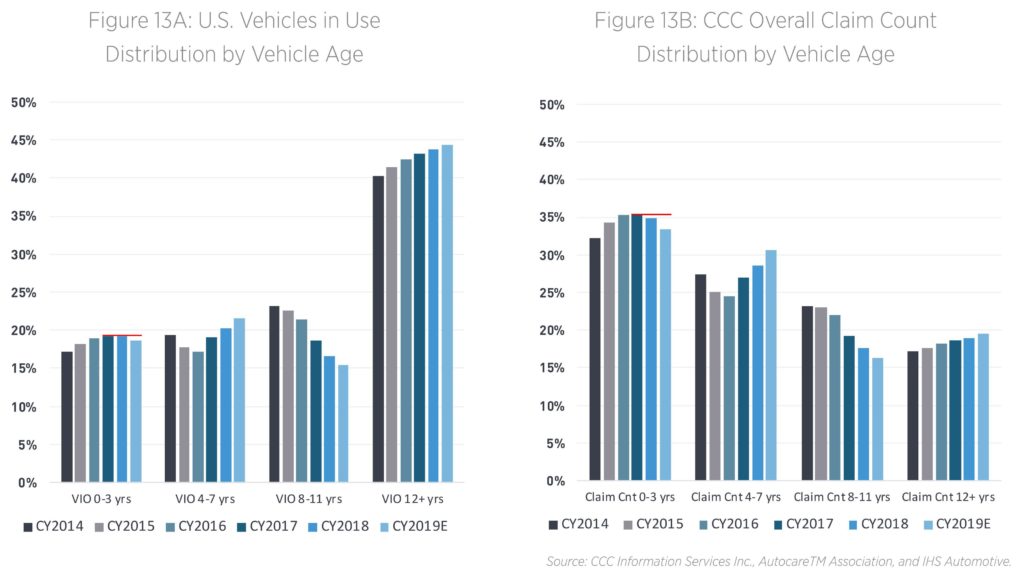 Advanced driver assistance systems have spread to more of the vehicle fleet in the past two calendar years as OEMs close in on their self-imposed 2022 deadline to make autobraking standard. Repairers also should remember that OEMs were effective May 2018 required to install backup cameras on every new vehicle they built.

However, some trends bear out in repairers’ favor to drive frequency back up, though Gotsch said it ultimately might just “net out.”

Commute time is “sort of a grim picture, frankly,” and traffic is more congested, which should make for more crashes, she said.

Though the “small but meaningful decline” in frequency due to ADAS existed, severity continued to rise, Gotsch said. She expected claim costs overall (including total losses) to be up as much as 5.5 percent, compared to a little over 4 percent last year.

However, “we do hope” repair costs will decline as ADAS that fails to prevent a crash at least slows the vehicle enough to cut down its severity, she said.

CCC research has found that vehicles with ADAS have fewer low-speed but more moderate-speed crashes than vehicles that don’t. However, the ADAS-equipped vehicles also see fewer high-speed crashes arise, which suggests the cars are slowing themselves enough that the collision isn’t as bad as it could have been.

CCC and Honda have found repair costs fall in certain crash conditions because of that kind of mitigation. The IIHS in 2014 research highlighted in the CIECA webinar also reported that a 2013 Mercedes C-Class might emerge from a $28,000 25 mph rear-end crash with causing only $5,700 worth of damage. Its autobraking system — yes, they date back further than you think — was able to knock 13 mph out of a crash, even if it doesn’t avoid the collision entirely. In case you’re interested, the 12 mph crash gave the C-Class $3,438 worth of damage and hit the Malibu with $2,277 worth. The 25 mph crash caused $9,457 worth of damage to the C-Class and $18,674 to the Malibu.)

CCC found the average collision loss cracked $4,000 for the first time this year, based on data through July. It found the average repair in 2018 cost nearly $1,000 more than 2004, with most of the increase coming from replacement part prices and additional miscellaneous operations (such as scanning, which the industry didn’t realize it had to do until 2016).

Gotsch said the average keys-to-keys cycle time roughly grows by two days for every $1,000 increment in repair cost, and a $10,000 repair can mean “over 30 days.”

She said many insurers are considering revisiting their rental policies in light of repairs taking longer than provided for in the contract.