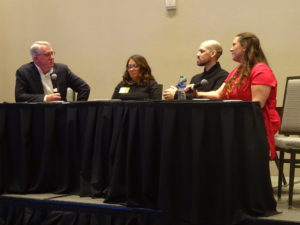 Responding to a prompt about OEM repair procedures, Marcia Seebachan told the Collision Industry Conference last week that her profession’s code of ethics demands decisions based upon evidence.

As a licensed clinical social worker in Texas, it would be unethical for her to hand a client based on her opinion rather than evidence, she told a CIC audience Nov. 5.

She and colleagues are taught to examine practices, theories and modalities supported by evidence. Research and proof must support a particular intervention on behalf of a client, she said.

“I just can’t fathom practicing any other way,” said Marcia, who saw her and her husband’s lives changed as a result of an incorrect auto body repair found largely responsible for their ordeal.

Matthew and Marcia Seebachan were traveling in a 2010 Honda Fit on a 75 mph stretch of road in 2013 when a 2010 Toyota Tundra in the other lane hydroplaned into their path, leading to the Fit striking the right front quarter of the Tundra in a T-bone collision.

Two of the Tundra’s occupants were uninjured, while the other was merely bruised. The Seebachans were seriously injured and trapped inside the Fit. Both remain in pain today, Marcia said.

Experts for the plaintiffs said in court documents that the severity of the crash and the Seebachans’ injuries were the result of John Eagle Collision Center adhesive-bonding the Fit’s roof during a $8,500 hail repair in 2012 for the prior owner. Honda OEM repair procedures demand the roof be welded more than 100 times.

A jury awarded the Seebachans $31.5 million from the shop in 2017; the couple and shop later settled for an undisclosed amount.

Contacted Wednesday, John Eagle Collision referred us to their attorney. Counsel from the 2017 case declined to comment.

Testimony by John Eagle Collision body shop manager Boyce Willis during the litigation alternately describes a shop which disregarded OEM procedures in favor of either the shop’s own opinion or those of insurers. At one point, Willis even suggested he understood joining better than Honda.

Marcia Seebachan said when consumers buy a new vehicle, they know it has met various standards.

“It’s not reasonable to expect” that an informed decision was only possible when purchasing a new car, she said. It would be wasteful and cost-prohibitive, she said.

“The second and third owners don’t have any less right to that informed decision-making as the first,” she said.

Any work done on a vehicle also needed to be “evidence-based,” Seebachan said. If a shop asserted their repair was as good as or better than the original, it should be able to provide proof, she said.

(Ironically, Marcia herself demonstrated the scientific rigor she advocated during the Nov. 5 talk. She told the audience she tried to research vehicle lifespan ownership and in doing so read that a car had 2-3 owners. But, she noted, she couldn’t find a “good source” for that statistic and therefore wouldn’t cite a specific one.)

She said she and Matthew conducted research before buying the 2010 Fit in August 2013. Both sets of parents taught them to look for a vehicle averaging 15,000 miles or less a year, and the couple also researched safety ratings. They evaluated both variables based on the commute Matthew would have to his college, she said.

They settled on the Fit, which had just one previous owner, good mileage and safety ratings and Honda’s reputation, she said. Its CARFAX was clean except for a mention of upholstery work, according to their attorney Todd Tracy.

CIC Chairman Jeff Peevy (Automotive Management Institute) said the Seebachans’ story of research was exactly like that of his daughter — whom he said bought a used silver Honda Fit perhaps 70 miles from the Seebachans’ dealer. His daughter resembles Marcia Seebachan in age and appearance, and his son-in-law is the same age as Matthew.

“This could happen to any of us,” Peevy said. 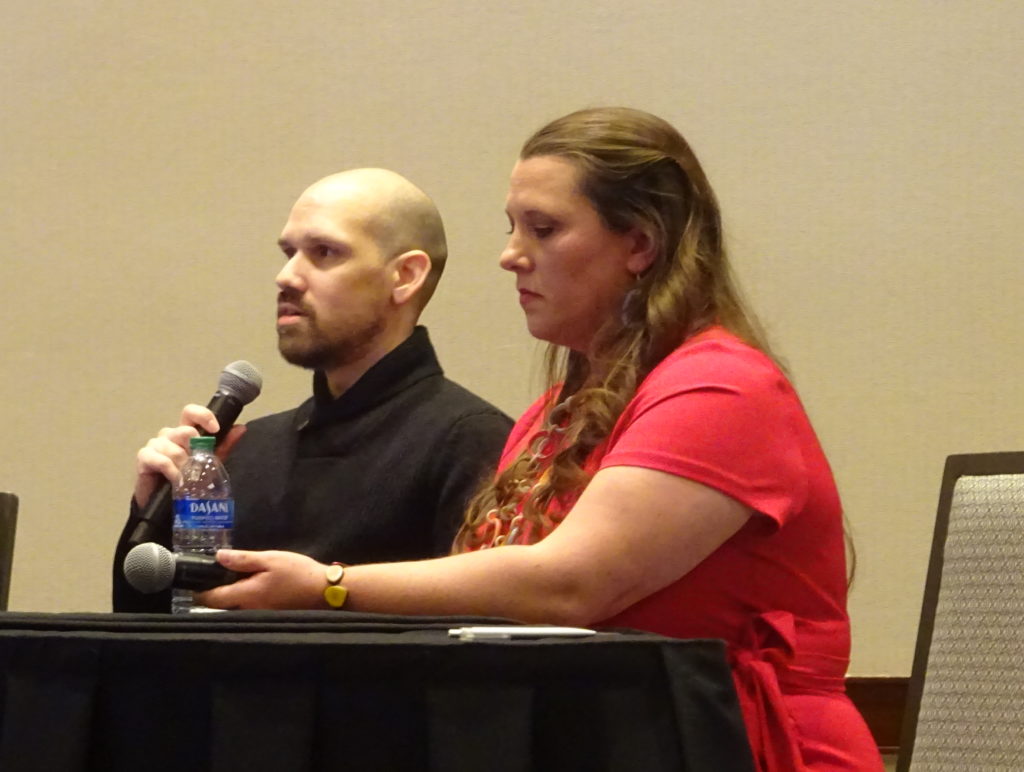 “The defendants’ may suggest that pre-owned buyers are not entitled to the same degree of safety as the original owner,” wrote plaintiff’s engineer Neil Hannemann, a former chief engineer for the Ford GT who was responsible for its crash performance. “While the vehicle may be used, have mileage and age, creating wear and tear, this should not affect the important safety systems. These systems do not ‘wear out’ like engines, transaxles, suspension, etc. The safety systems should be designed for the ‘life of the vehicle’. The vehicle structure also does not ‘wear out’, it should maintain its integrity and function for the life of the vehicle. Safety is not related to the age of a vehicle.”

A 2017 Collision Hub “Repair University Live” explained the difference between warranty, which would typically only apply to the vehicle owner at the time of the repair and not transfer to a subsequent owner, and liability. The latter “is going to follow you everywhere,” according to Vehicle Information Services collision repair attorney Erica Eversman.

“You own it,” Eversman said then. “You touched the car. If it wasn’t done right, it doesn’t matter really who it hurts.” She said this might vary based upon state law, but generally society wants a person injured through no fault of their own to be able to collect from the at-fault party.

This threat can exist even if the owner told you to fix the car incorrectly, according to Eversman.

Tracy in 2017 said he originally looked at Honda’s engineering as a culprit for their ordeal, but he eventually traced the roof failure back to work by John Eagle Collision.

Marcia said last week the couple realized it wasn’t just “a series of unfortunate events,” but “something intentionally chosen to have been done to the vehicle,” she said.

It was one thing to deal with trauma which was “unraveling your life,” but to learn that someone’s choices increased the likelihood it impacted you was “retraumatizing,” she said.

Matthew said he was struck during the CIC discussion by the “domino effect” from a specific improper repair. It affected the vehicle in the crash, he said. But another domino was finding the attorney and having someone to fight for them, which he called “unusual.” The outcome of the case was also “unusual,” he said.

“But there’s so many people that this probably happens to that either … don’t know what the domino effect that caused the issue was, or they don’t have the help,” Matthew said.

Marcia said they were “fortunate” in receiving answers.

“I think it would be intentionally naive” to pretend their situation hadn’t happened to someone else, resulting in injury or death, she said.

“It would just be naive,” she said. 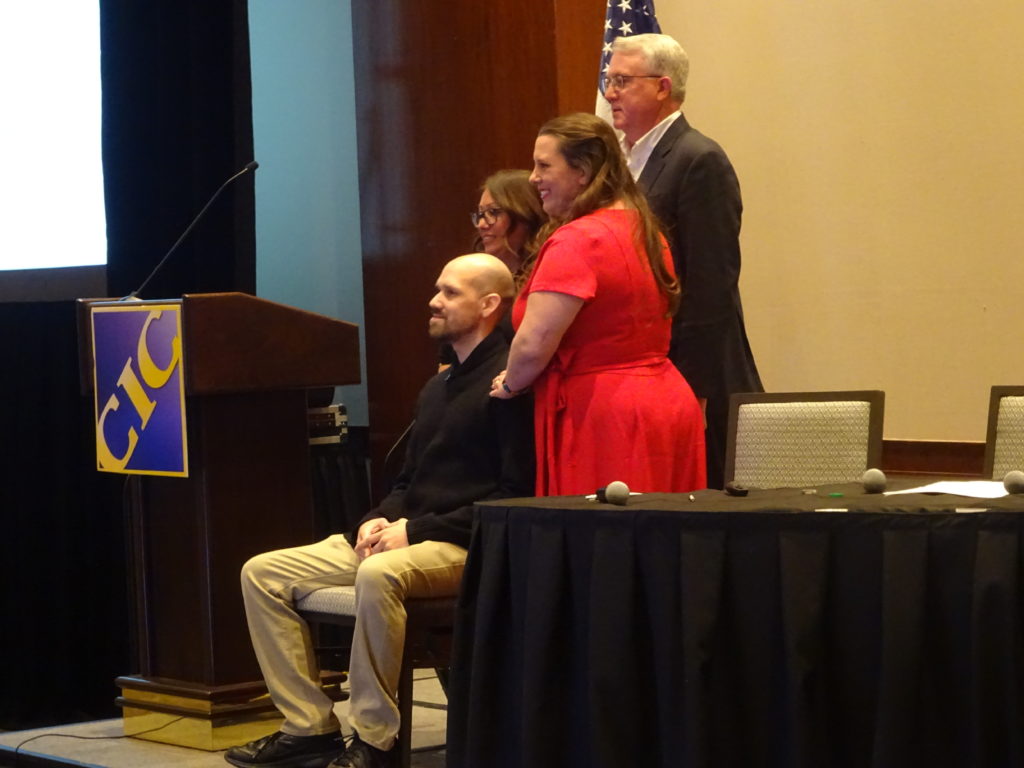 Peevy said the couple were saving lives through their strength and by courage and by sharing their story with the CIC (and in a subsequent video).

Marcia said the couple would never pretend other people have had trauma upend their lives, but not everyone has an opportunity to do something good with it. She said she felt they had received an opportunity to do that, and that was the “most meaning” they could obtain from the experience.

“We’re very grateful for that,” she said.

Peevy has throughout his tenure as CIC chairman placed an “empty chair” on the stage of every session, meant to remind the gathering of insurers, vendors, OEMs and auto body shops of the customer. He said he promised to fill it, and did so with the Seebachans.

“I would like to fill it some more,” he said.

Peevy also said he would like to see the industry “put the value of a human life ahead of everything else. And to me that changes the conversation.”

Left, Collision Industry Conference Chairman Jeff Peevy’s daughter Tiffany Clements is the same age as Marcia Seebachan and had a nearly identical 2010 Honda Fit to the improperly repaired one Marcia and Matthew Seebachan were driving, right, at the time of a 2013 collision. (Left image provided by Peevy; Right image provided by Tracy Law Firm, circling in original.)