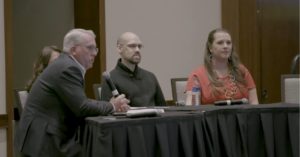 Collision repairers who missed the Collision Industry Conference interview with John Eagle plaintiffs Matthew and Marcia Seebachan now have an opportunity to watch footage of the powerful conversation.

The CIC posted video of the conversation with the Seebachans on its YouTube channel on Thursday. CIC generally has a no-videotaping policy, but Chairman Jeff Peevy made an exception to share the interview with “as many people as possible.”

The Seebachans bought a 2010 Honda Fit in August 2013, its CARFAX seemingly clean except for a mention of upholstery work, according to their attorney Todd Tracy.

Unbeknownst to them, John Eagle Collision Center had attached the Fit’s roof with adhesive during a 2012 $8,500 hail repair for the vehicle’s prior owner. Honda repair procedures called for more than 100 welds.

The Seebachans had been traveling on a 75 mph stretch of road on Dec. 21, 2013 when a 2010 Toyota Tundra in the other lane hydroplaned into their path, leading to the Fit striking the right front quarter of the Tundra in a T-bone collision.

The 2010 Honda Fit has a “good” rating on the IIHS’ 40 mph moderate-overlap crash test — which an engineer appearing for the Seebachans called “virtually identical in terms of crash forces.”

“The Seebachan’s would likely have had only minor injuries if not for the faulty repair,” wrote Neil Hannemann, an engineer who has worked on the Ford GT and Mercedes SLR.

Instead, the crash left both with severe injuries (see a list here and graphic images here and here), and both experience constant pain today.

A jury found the body shop responsible for the majority of their ordeal and awarded $31.5 million in compensatory (nonpunitive, covering expenses) damages. The Seebachans later settled with John Eagle for an undisclosed amount.

The powerful half-hour video should be required watching for every collision professional, insurance adjuster, industry vendor and vo-tech student. It shows the potential human impact of disregarding OEM repair procedures.

See our coverage of the live event here and here. Here’s some specific items to watch for during the video, which also features Peevy, president of the Automotive Management Institute, and his wife, Automotive Training Coordinators owner Marie Peevy, as interviewers.

5:15: The couple’s goals before the crash, including a dream of fostering sibling children, and how those were destroyed.

7:50: The Seebachans’ plans to have Christmas lunch with extended family the day of the accident and the reaction when they didn’t show.

9:45: Memories of the accident and the hospital afterward.

18:07: Realizing something might have been wrong with the Fit itself.

20:50: The idea of a “domino effect” from the decision to incorrectly repair the vehicle and stars aligning to obtain a resolution — something others in a similar situation might not be fortunate enough to receive.

22:39: How the Seebachans’ story caused another shop to rethink a repair.

24:00: Marcia Seebachan on using “evidence-based practice” rather than opinion.

25:30: Used vehicle buyers deserve a chance to make informed decisions about vehicles too.

27:00: The Seebachans’ life remains affected by their injuries. “Pain is constant” for both.

29:22: Their relationships with extended family are in turn affected.

From left, Collision Industry Conference Jeff Peevy, president of the Automotive Management Institute, and his wife, Automotive Training Coordinators owner Marie Peevy (obscured behind him), interviewed Matthew and Marcia Seebachan on Nov. 5, 2019, during the CIC. This image is a still from video of the event posted Dec. 4, 2019. (Screenshot from Collision Industry Conference YouTube video)