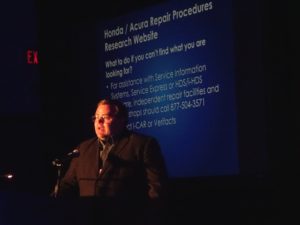 Representatives from Subaru, FCA, Honda and Toyota explained how to accomplish one or both during the SCRS OEM Collision Repair Technology Summit on Nov. 7 during SEMA.

Of course, you should make an honest effort to find the information yourself first, and the automakers offered guidance on how to access their sites in the first place. Find that coverage here, here, here and here.

“The OEMs are open to our insight,” moderator Mike Anderson, CEO of Collision Advice, told the audience.

Dan Black, FCA advanced body development and collision repair manager, said the company’s Tech Authority search feature was “pretty good” and would help you “dig.” It should be exhausted before you contact FCA, according to a slide.

(Black at one point said shops often ask about FCA’s sectioning procedures, noting, “at that point I ask them to look at the repair procedures.” That information exists there.)

If searching the site yourself doesn’t work, click the feedback button on the top right of the page where you were stuck, Black said. He called it “essential” that the shop be on the correct page, for FCA will route it to an expert in that subject.

Generally, FCA can get you a response in 24 hours, according to Black.

A final option would be to use the “Ask I-CAR” feature on the educational organization’s Repairability Technical Support portal, according to Black. I-CAR acts as a middleman to get auto body shops technical answers from OEMs.

Black said “Ask I-CAR” was “very prompt” and an “absolute necessary resource” for FCA given the size of the collision repair industry. Moderator Mike Anderson, CEO of Collision Advice, said I-CAR’s turnaround was two hours or less in his experience.

Black gave an example where a shop’s feedback led to FCA refining its repair procedures. A cavity behind a panel on an unspecified vehicle contains flexible foam, and a shop had wondered how to remove it given the absence of access. 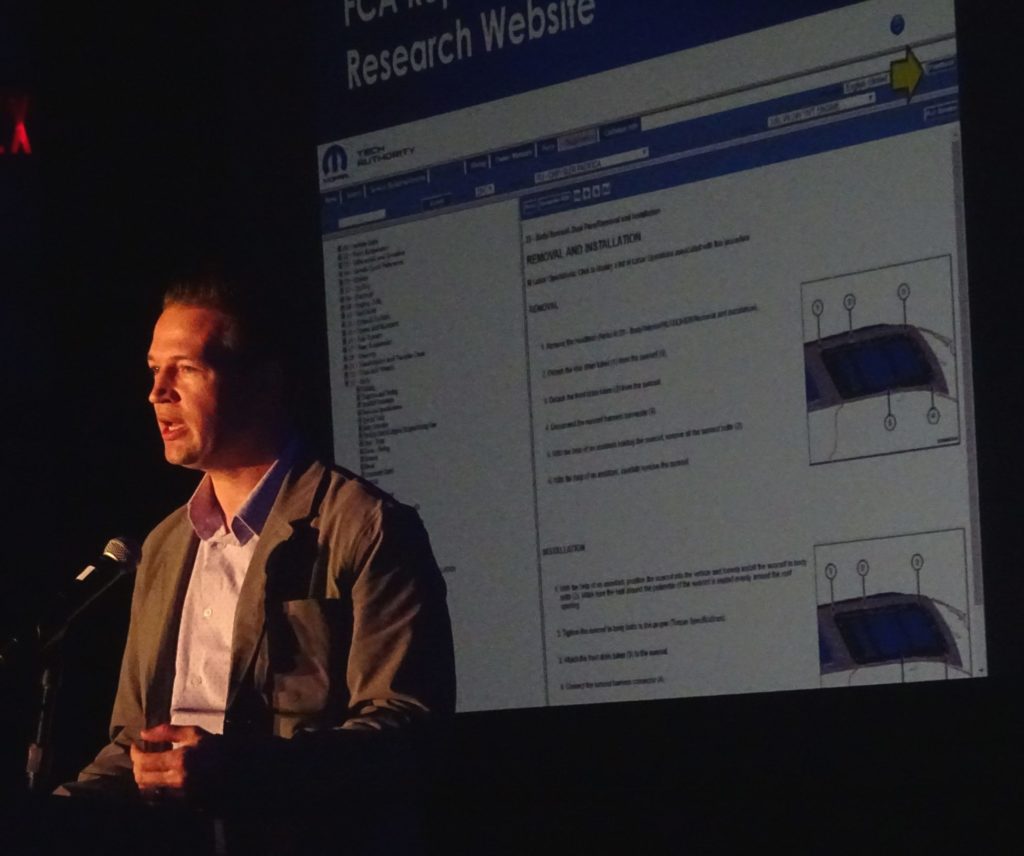 FCA engineers developed a process in which a 1-square-inch window could be cut or drilled into the part, so long as the steel’s strength was below a certain threshold.

“Nothing above a high-strength steel grade is acceptable,” Black said. Now, a shop can extract the foam in the weld zone area.

“With shop feedback,” FCA could work with engineers on a solution which is “now documented in all of our processes,” Black said.

He showed an example from the 2017 Chrysler Pacifica. 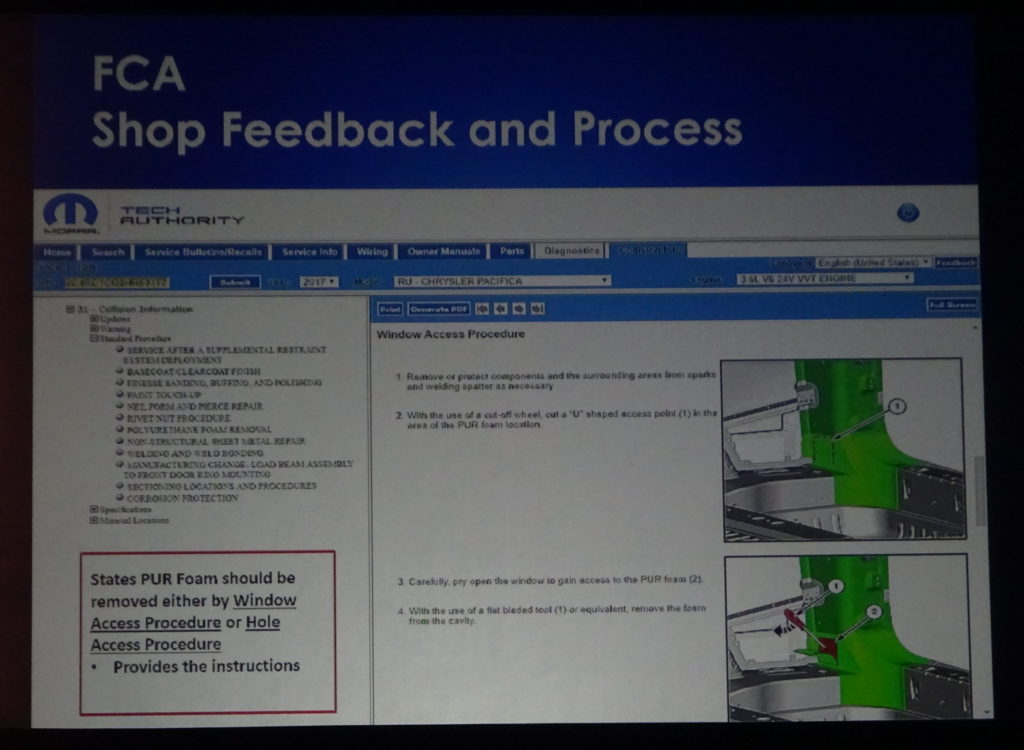 He gave the example of a measurement in Toyota’s procedures being incorrect or information missing from the repair procedures.

Mendoza said that feedback reaches Toyota’s repair procedure authors, who will consult with an appropriate party to address the issue. He urged shops to be as thorough as possible, for a lack of clarity can prolong the process, and to attach photos.

“Think about how many models that we have,” he said.

A slide from Mendoza’s presentation seemed to indicate it would be best to hit the feedback button on the relevant repair procedure document, similar to FCA.

“Sometimes it’s a misunderstanding” not requiring a correction, he said.

Mendoza described how feedback improved repair procedures related to a blind spot monitor bracket. In some instances, the replacement quarter panel ships with a bracket attached. But sometimes, the shop must obtain the bracket separately and weld it in place.

Mendoza said Toyota has also occasionally corrected measurements or added a new dimensional value to a set based on such feedback. 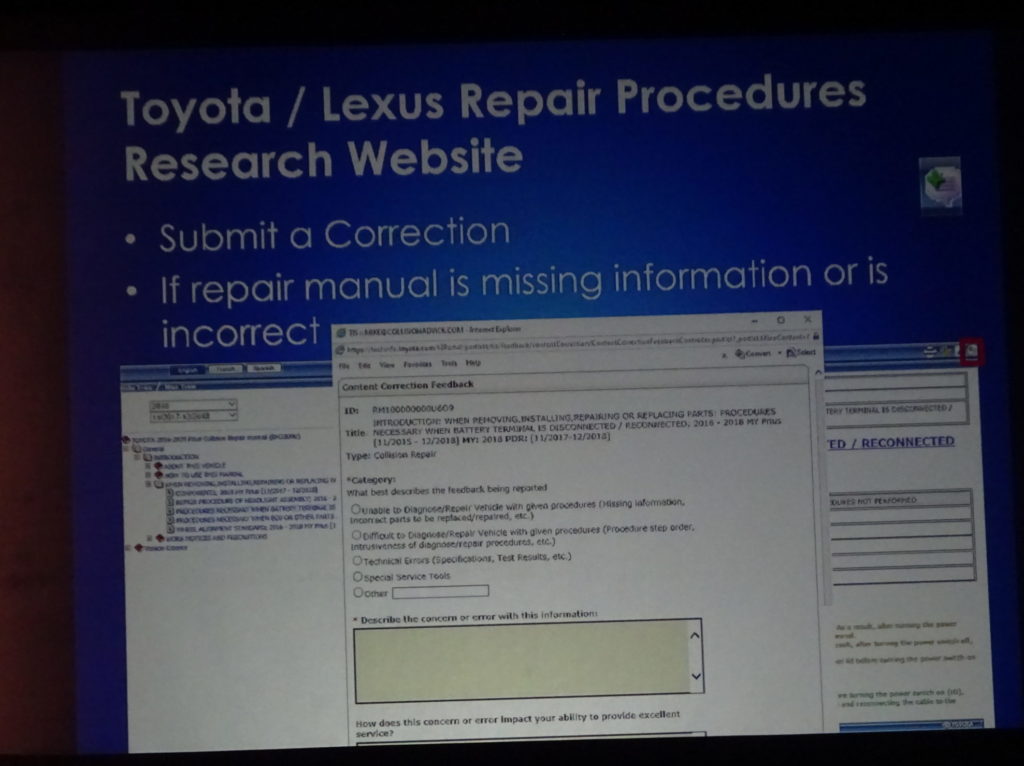 Subaru’s New Jersey headquarters was in regular, “almost weekly” with Subaru’s engineers in Japan on improving repair procedures, she said.

If you have an idea or notice an error, email certifiedcollisionsupport@subaru.com, she said.

Be specific, Riedel said. Don’t declare, “‘Your repair procedures sucks,'” she said. “… The engineers don’t want to hear that.”

Lay out the business case for an alternate repair, such as its potential to reduce total losses, she said.

Provide a detailed explanation, she said. It will help, for Subaru’s team in the U.S. is small and its Japanese team hadn’t focused on body repairs lately.

If a shop wanted to write a “dissertation … I will happily take that,” she said. She also encouraged taking photos. 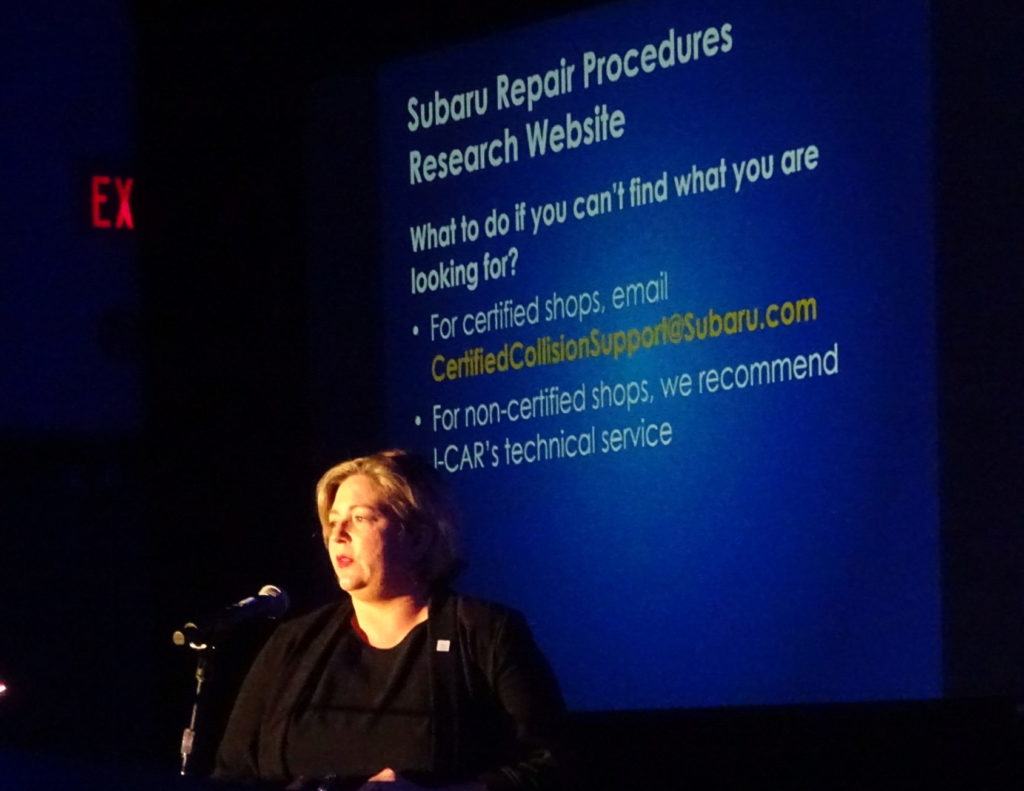 Subaru will share results of the inquiry with the shop, including any “counterpoint” to the shop’s case, according to Riedel.

She also encouraged shops to use I-CAR. “Another place for you guys to be heard,” she said.

Riedel presented an example of a shop’s exchange with Subaru that, while perhaps not the answer repairers would like, illustrate how the process might work.

According to another slide, a body shop had sought clarification on modules and when they needed to be replaced. She said Subaru of America contacted headquarters in Japan, and they said “‘yes, indeed.’” The module is so precisely calibrated that it must be replaced if touched, Subaru Japan confirmed.

Subaru of America was hoping it could tell repairers something different, but “there’s obviously a really specific and important reason for doing that,” Riedel said. So if the instructions call for replacement after any touching of the module, follow them, she said.

However, if the shop hadn’t first subscribed to Honda’s OEM repair procedures (techinfo.honda.com), “we’re gonna tell you you need that first,” Kaboos said.

I-CAR could probably answer “90 percent” of the questions Honda takes, he said. “We work very closely with them,” he said.

Uncertified shops can also tap I-CAR. While Gold Class facilities and Platinum technicians get RTS and therefore “Ask I-CAR” free, subscriptions are available to anyone for $26 a day, $200 a year.

If I-CAR or VeriFacts don’t have the answer, they’ll contact Kaboos on the shop’s behalf.

“They’ve got me on speed-dial,” he said.

Kaboos said if he can’t find an answer, he’ll obtain one from Honda in Japan. 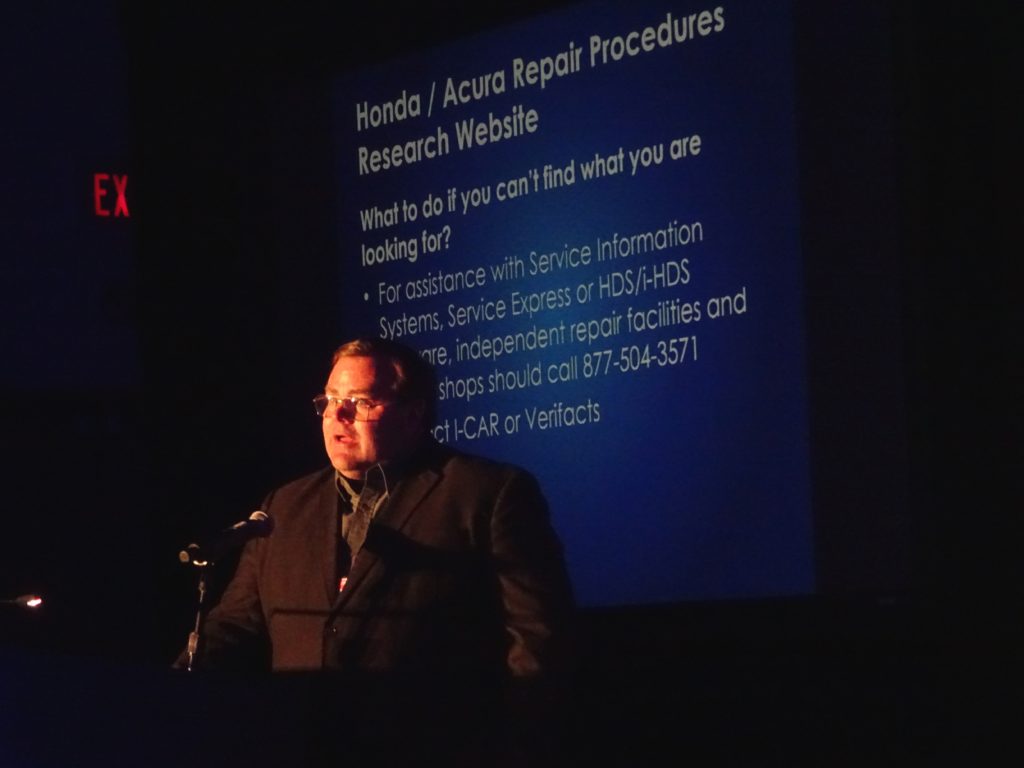 His talk offered an example of how feedback led to a change in Honda’s repair information.

A corporate trainer contacted Honda regarding a tech who had separated a 1,500-megapascal door ring at factory seams. The trainer couldn’t prove the tech was wrong using Honda’s free welding and sectioning guidelines.

Kaboos called that publication one of the OEM’s “most important” documents outside of the vehicle-specific repair procedures. But it’s not a substitute for them.

The OEM repair procedures are “very, very specific” that you can’t do that — the part must be replaced as a complete unit, Kaboos said.

“He never looked up the model-specific information,” Kaboos said.

Kaboos responded that this might be a gap in Honda’s service information. Relying solely on the free one could lead to an unsafe repair. He said he rewrote the guide to fix this, and it’s now eight pages, up from three. If a repairer was fixing a Honda without that document, “you’re probably not optimizing the repair. To say the least,” he said.

The OEMs discussed the idea of trying to make repair procedures more user-friendly. Black said the company knew some content might be hard to understand and sought to improve that.

He said steps to that effect might be in development but he couldn’t discuss it, but FCA did want to make Tech Authority “more interactive,” he said. A goal was to put information before the user rather than the user having to hunt for it, he said.

Mendoza suggested shops use the feedback button, and he said Toyota always was examining improving its information.

Riedel said the OEM Collision Repair Roundtable often discusses the topic and how to streamline the documents and standardize nomenclature.

“It’s a conversation we’re always having … how to make this more accessible and easier,” she said.

Anderson offered a couple of points in defense of OEMs. An automaker in one country might think its format was best, while an OEM in another country felt its was. “It’s like trying to solve world peace,” he said.

Anderson also noted that whatever repair procedures an automaker developed had to work internationally, though Black said FCA might have different tools for different markets.

Correction: An earlier version of this article misspelled Subaru wholesale parts specialist Nicole Riedel’s name. The article has since been corrected to address this.

Dan Black, FCA advanced body development and collision repair manager, speaks at the SCRS OEM Collision Repair Technology Summit on Nov. 7, 2019. The slide behind him marks with an arrow where to submit feedback or questions to FCA about repair procedures on www.techauthority.com. (John Huetter/Repairer Driven News)

An inquiry about FCA’s repair procedures led to it developing a technique for removing foam behind metal below a certain steel threshold. Dan Black, FCA advanced body development and collision repair manager, said that concept was shown here for the 2017 Chrysler Pacifica. (FCA slide; photo by John Huetter/Repairer Driven News)

Toyota’s “TIS” repair procedure website has a means of submitting feedback about missing information or errors within the instructions, such as an incorrect measurement. (Toyota slide; photo by John Huetter/Repairer Driven News)