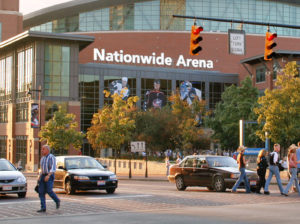 An attorney for a man whose vehicle was left unsafe after repairs tied to a Nationwide Blue Ribbon facility told the Pennsylvania Supreme Court that the insurer’s election to fix the vehicle made it liable for the work.

The insurer had inserted itself into the repair, Kenneth Behrend of Behrend & Ernsberger told justices in oral arguments Nov. 21 for the long-running Berg v. Nationwide lawsuit.

(Special thanks to PCNTV, whose video coverage of the oral arguments identified speakers and allowed us to capture what was said at the proceedings.)

Nationwide attorney Robert Heim of Derecht said Nov. 21 the record showed that plaintiff Daniel Berg selected the Blue Ribbon shop, Lindgren Chrysler-Plymouth, based on prior experience with the repairer.

Four months later, the Jeep Grand Cherokee work was finished, with some of the frame work outsourced to a third party. The vehicle was unsafe, but Nationwide either didn’t inspect it as it should have or did inspect it and didn’t tell the Bergs, Sprecher concluded in 2014.

Superior Court Judge Victor Stabile’s majority opinion for himself and Judge Paula Ott summarized the Bergs’ complaint against Nationwide as stating the carrier through its Blue Ribbon DRP shops “promised to restore an insured vehicle to pre-accident condition ‘within repair industry standards’ and to remedy any departure from such standards. Appellant did not promise to inspect an insured vehicle prior to its return.”

“In these circumstances, we cannot conclude that Appellant’s failure to inspect Lindgren’s repair work amounts to bad faith,” Stabile continued in the majority opinion. “Neither the trial court, the Bergs, nor the Dissent, cite any legal authority supporting a conclusion that an insurer’s duty of good faith and fair dealing encompasses an inspection of repairs prior to returning a vehicle to an insured. Even were we to find such a duty, the evidence here does not rise above negligence, much less support a finding of bad faith by clear and convincing evidence.”

According to the majority, there was “no evidence that the extent of the faulty repairs would have been evident during a visual inspection when the repairs were nearly complete, much less that Appellant knew or should have known about the faulty repairs.” (Emphasis Stabile’s.)

Behrend said an insurer had two alternatives. Upon receiving an estimate for $12,000 like in this case, it could cut a check for the amount and say “‘Do whatever you want with it.'” The carrier wasn’t involved in whatever happened next, he said.

However, if the insurer made payment of that $12,000 contingent on repairing the vehicle, “‘we have elected that you must repair it,'” he said.

The insurer has been put on the hook for the quality of the work regardless of “whatever shop” the insured picked, he said.

If the carrier said it must be repaired, “they’re responsible,” he said. “That’s the distinction.”

In their September 2018 petition for reconsideration by the Supreme Court, the plaintiffs argued that “Pennsylvania law and insurance industry standards” both impose a duty to inspect repair quality.

“The legal premise that an insurer exercising an option to repair a motor vehicle must return that vehicle in a serviceable condition is well-settled insurance law,” the Bergs wrote. (For consistency with the Superior Court, we’ll refer to the plaintiffs collectively despite Sheryl Berg’s death.)

The Bergs quoted “Couch on Insurance,” calling it “the national reference source on insurance law”:

… where a collision insurer has agreed to repair and actively takes the matter in hand, making all necessary arrangements, the reasonable conclusion is that the insurer thereby assumes the duty of having the repairs made with due care; and it is not relieved of this duty merely because it chooses to select an independent contractor to make the repairs, and refrains from exercising any supervision over his work.

According to the trial court’s 2014 judgment and finding of facts, plaintiffs the Bergs had a Nationwide auto policy that stated:

1. Pay you directly for a loss.

2. Repair or replace your auto or its damaged parts

3. Return stolen property at our expense and pay for any damage. (Minor formatting edits.)

“Nationwide did not pay the Bergs directly for the loss,” the Bergs wrote. “Instead, Nationwide delivered the claim payment to its BRRP facility ‘by check, dated April 14, 1997.’ The check was not ‘made jointly payable to Plaintiffs.’”

Heim did note that Daniel Berg also wanted the vehicle repaired despite notice of its structural damage. “Of course he did,” Heim said. The record indicated a total would have put Berg $4,000 out-of-pocket, Heim said.

If the Bergs are right, the Superior Court majority might have been tripped up on a confusing reality of some auto insurance policies: “Electing to repair” isn’t necessarily the same as paying for a loss in the form of the cost to repair a vehicle. They seem identical, but they’re not — and the distinction is critical for shops, consumers and insurers to understand.

In an election to repair, the carrier is making repair decisions and becomes like a general contractor — with all the liability that generates. In the other, the vehicle is still getting fixed, but the customer is in charge. The insurer reimburses the customer for the bill but doesn’t get involved with what’s actually done on the vehicle — and therefore holds no liability.

Behrend said the Superior Court majority wrote that no contact occurred between the body shop and insurer from the time the adjuster asked for the repair to the lawsuit.

But Behrend said the plaintiffs knew that communication occurred two months into the process. The record indicates that a Nationwide adjuster received an email from a supervisor asking “‘what’s going on'” with the Jeep. No response is recorded, but 11 days later, the Bergs receive their vehicle. He argued this meant the adjuster had communicated with Lindgren.

In addition, the shop had following the repair talked to on-site Nationwide inspectors wondering why they weren’t getting paid, Behrend said. He argued that Lindgren behaved as an agent of Nationwide.

Heim said such inspections weren’t monthly, “but close.” He characterized it as more like “in and out.”

Wecht asked if this was part of the Blue Ribbon DRP program, and Heim said, “correct.”

Then why wasn’t the Superior Court bound to defer to the trial court’s finding that Nationwide held an obligation to notice during inspections that the work on the Berg’s Jeep “was not proper or adequate,” Wecht asked.

Heim said the trial judge said they either knew or should have known, but “should have known” was the standard for negligence. (The implication seemed to be that this wouldn’t rise to bad faith.)

No evidence existed as to what those inspectors examined that it was clear repairs were wrong, Heim said. Besides, the Jeep later passed a state safety inspection, he said.

(However, the Superior Court majority opinion said both Nationwide and the Bergs agreed that Lindgren Chrysler-Plymouth did “poor repair work.”)

Regarding duty, Heim argued that cases cited by the Bergs weren’t bad faith matters; rather, they were negligence or breach-of-contract cases, he said.

“There’s no evidence the repairs were done under Nationwide’s direction,” he said.

Heim said Nationwide wasn’t acting as a surety guaranteeing the quality of its direct repair program shops’ work. Rather, its “heightened guarantee” would simply continue to pay until the work was done so long as the claimant had picked a DRP shop. 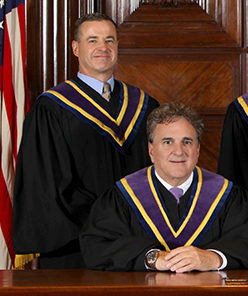 Behrend further discussed Nationwide’s obligations prior to his elect-to-repair argument.

He said the fact that the body shop had to send the Jeep to a third party to handle the frame damage put Nationwide “on notice” that “this is an unusual situation.” It indicated the vehicle had more than minor damage, according to Behrend.

Wecht asked if Behrend was saying that Nationwide failed to meet its duty to replace/repair or duty to inspect, or both.

He said the manner of accomplishing this wasn’t the issue. “Presumptively, they have to inspect it,” but Nationwide had a Blue Ribbon DRP shop inspecting it for them, Behrend said.

Wecht asked if Nationwide’s duty was heightened because Lindgren was a Blue Ribbon shop and because the insurer was on notice of a special problem. Or was Behrend making a general duty point?

Behrend replied it was a “more general point,” but additional facts should be considered on top of that. Nationwide had “actual knowledge” the vehicle had been examined and considered to be a “structural total loss,” he said.

Behrend said some occurred before the lawsuit, and some after it. One element included Nationwide inserting itself into the repair process and “turns a blind eye” to what happens.

Baer asked if Nationwide’s obligation was just to “write a check?”

If the body shop got the repair wrong, it would be sued, not the insurance company, Baer said. “It wrote the check for the repair” and had the right to presume the shop fixed the car, he suggested.

Behrend replied that if the vehicle owner indeed picked the shop, “it’s on your head.” But Nationwide said the vehicle could be repaired and suggested a body shop, he said.

Wecht asked if Behrend was asking the court to apply a guarantee to any arrangement where the carrier “steers” someone to a body shop. “That’s a level of duty that we haven’t recognized before,” Wecht said.

No, Behrend said. It was a “broader standard.” If the insurer elected to repair a vehicle, the duty is triggered “Regardless of where it is.”

Baer asked if the position was that if the insurer picks a shop, “it’s a surety for the garage.”

“Correct,” Behrend said. He said the relationship began with the policy.