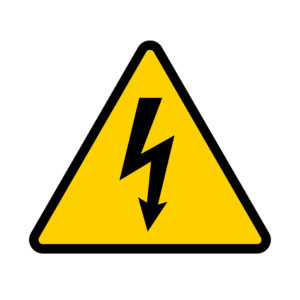 OEMs are committing to sell more models with at least some electrification as the decade progresses. This might range from merely a hybrid powertrain like a Prius, a plug-in hybrid like a Volt, or a fully battery-electric car like a Model 3. All three categories of powertrain can pose a threat of shock or fire, according to CCAR safety content author Bob McGinn. Volvo, for example, has pledged every one of its next-gen models will be at a minimum a hybrid.

Following OEM and regulatory requirements for safety tooling and PPE will of course be paramount. But CCAR’s session offers a repairers a crash course in what that might entail.

One key consideration when shopping: Whatever an automotive professional classifies as “high voltage” might be “low voltage” to an equipment manufacturer used to selling gear to electricians, according to McGinn.

120 volts to 1,500 volts direct current and 50-1,000 volts of alternating current is considered low voltage to the International Electrotechnical Commission, according to a slide. However, automotive considers 50 volts high voltage, be it AC or DC.

So for personal protective equipment, “you’re paying too much” if you’re buying at the IEC’s high voltage standard, McGinn said.

Starting from the ground up: Some of you might already have shoes capable of delivering adequate electrical foot protection, according to McGinn.

A slide said such footwear would include those rated for ASTM F2413-11 EH electrical hazards. They should be able to protect the occupant from 18,000 volts at 60 hertz of alternating current for a minute or to 750 volts of continuous protection, according to the slide. That would be “well within” the range of what a shop would encounter during electric vehicle work.

An alternative would be to wear dielectric overshoes good for up to 20,000 volts — but know that they’re not going to be crushproof (no steel toes, etc), McGinn said.

You should wear appropriate PPE (aprons, boots, gloves, etc.) with specs meeting the voltage range and rating you’re handling, and never use expired gear unless it has been recertified, McGinn said.

For rubber gloves, you’re likely seeking a pair rated for Class 0 — not 00 or 1 — McGinn said. Those can protect you from up to 1,500 volts of DC protection and should have a red-colored label, he said.

You must inspect rubber gloves for surface defects, McGinn said. Any pinholes are “a big danger,” McGinn said. A slide recommended air-testing with a glove pump or roll-up testing before and after every use. However, never test gloves with the shop’s air supply, he said. You can “pinhole” in the glove without being aware of it, he said. In addition to being a safety risk, it also ruins a very expensive piece of equipment.

A shop would want to further protect the rubber gloves with approved outer leather gloves, according to McGinn. He said those too should be inspected for damage and contamination — particularly the latter.

You don’t want grease and metal shavings on the outside, he said. At 400-600 volts, such contaminants are “extremely conductive” and will result in a hazard or fire, according to McGinn.

“Make sure the gloves are clean,” he said.

Face protection demands more than just safety goggles when working on an electrified vehicle, according to McGinn. A technician should wear a full-face shield to protect against threats including arc flashes.

An arc Class 2 mask like the Sellstrom 31200 featured in the slide protects the user from arc flashes of up to 9.9 calories per cubic centimeter. McGinn said an engineer once told him a single calorie is like holding the tip of one’s finger over a cigarette lighter flame for 1 second. Second degree burns arise at 1.2 calories per cubic centimeter per second, according to the slide.

Never use personal protection equipment that you think might be suspect, McGinn said. “Let’s inspect all of our PPE frequently,” he said. One best practice might be to only use high-voltage PPE for high-voltage work, he said.

Tools and other equipment

A shop should have test equipment rated at IEC Cat III 600 volts or better, according to a slide. Lesser equipment won’t offer isolation at higher voltages, McGinn explained.

“Check, check, check your test leads” for deformities or contacts, McGinn said. Just like the overgloves with metal shavings, issues here can be a problem. Calling himself a “recovering tech” who had burned test leads before, McGinn asked the audience how many of them had experienced a test that “smokes” a section of the test lead.

Repairers can prevent being shocked here by using the one-hand and live-dead-live rules, according to McGinn.

The one-hand rule means that the user only manipulates a high-voltage device with a single hand, McGinn explained. Only a single hand should be touching a lead, the vehicle or the ground at any time, he said. This prevents you from making a contact circuit and sending electricity through your body if isolation is lost, he said.

The live-dead-live rule involves confirming that a hybrid or electric vehicle battery ostensibly powered down to 0 volts is truly dead. “We need to know that zero actually means zero,” McGinn said.

Touch the meter leads to an alternate source like a 12-volt battery or other item with the appropriate test spec to see if the meter reads 12 volts, McGinn said. If it does, then immediately test the high-voltage power source that’s supposed to be at 0 volts. If it reads 0 volts, test the 12-volt battery again to make sure the meter is still working correctly, he said.

Meters should be tested and used in the same range for live-dead-live and system voltage absence tests, McGinn said.

Repairers also need an insulation tester, for you can’t test for faults in isolation with a multimeter, according to McGinn. if you’re going to work in high voltage, “buy yourself a decent insulation tester,” he said. A slide warned never to try to use a multimeter or ohm meter as a substitute.

McGinn also suggested storing anything able to activate the vehicle (key fobs or keys, fuses, service plugs, etc.) in a box secured with two separate locks. Each lock requires a distinct key, and the two keys are held by two separate parties. (For example, a teacher and a student or an owner and technician.) The materials are only removed when everyone agrees the vehicle is ready for them, reducing unnecessary risk from activation during the work process.

Certain equipment might also be needed for battery/vehicle monitoring and isolation.

If there’s damage to the battery case but no “thermal event” (fire) yet, a shop should still take precautions like isolating the vehicle outside, 50 feet away from flammables or combustibles, according to McGinn.

The repairer would use a noncontact infrared or thermal imaging to determine if the battery is trending hotter or cooler, McGinn said. If it’s cooling or stable at ambient temperatures, than the repairer might proceed to further operations, he said. Trending or growing warmer “is not a good thing,” he said.

The battery should also be monitored for changes in the thermal state during removal from the vehicle, according to McGinn. Your expectation should be that the part is poised to experience a “thermal event” at any time, he said. A removed battery should be stored outside with the 50-foot radius described above but also protected from the elements, according to McGinn.