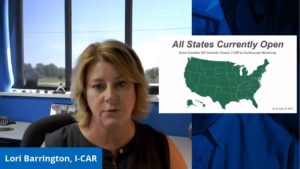 I-CAR in March halted live courses — including welding certification exams — as a response to the COVID-19 coronavirus. It wound up extending this formal nationwide moratorium through Monday.

CEO John Van Alstyne on Thursday called the educational organization “on the verge of coming out of pause.”

“We are open for business in all states,” I-CAR delivery Associate Vice President Lori Barrington said. Some counties might retain tighter restrictions, but “we are basically open,” she said.

I-CAR also had announced rolling 30-day delays of renewal dates for Gold Class shops, Platinum technicians and welding certificate holders because of the COVID-19 situation. However, Barrington on Thursday confirmed I-CAR would let stand the deadlines for shops and technicians it had announced May 1.

Any collision repairer with Gold Class or Platinum renewal date between October 2019 and April 2020 must complete everything but welding by July 31. Anyone with May-September 2020 renewal dates faces a Sept. 30 deadline to meet all criteria except welding. Anyone who had a welding certificate up for renewal by Sept. 30 will have their renewal date extended to that date in 2021.

A repairer’s Gold Class and Platinum renewal requirements might include live classes — a format Barrington said wouldn’t resume this summer. However, I-CAR earlier said it converted all the mandatory live classes to virtual editions which would fit the bill.

“There’s no extension on that,” Barrington said.

Though I-CAR last month announced it would extend its official moratorium on in-person training through Monday, Barrington revealed that the educational organization had actually conducted hands-on and welding courses in a few select states since May 1.

Barrington said I-CAR ultimately used the nonprofit, nonpartisan Kaiser Family Foundation’s state-by-state COVID-19 scorecard as a source for “two key data points” on when it could return to each state.

If a state permitted in-person restaurant dining and eased gathering size limitations, I-CAR would return to the area, according to Barrington.

Both the shop and instructor also needed to be comfortable with the idea of a class in that specific facility, she said.

Barrington said I-CAR conducted “significant outreach” to instructors in April, listening to concerns and taking suggestions. “The majority of our instructors are ready to get back at it,” she said, though some aren’t participating.

I-CAR’s scheduling team has been “pretty busy” as states re-open, rescheduling all of the items which had been on the books for April onward and receiving new requests for in-house training daily, Barrington said.

Requests for in-house training and welding are handled first-come, first serve, she said. “We will get you scheduled as soon as we can,” she said.

Both I-CAR and a shop are expected to commit to certain safety precautions to prevent the spread of COVID-19, according to Barrington.

Barrington said a shop must offer enough room for everyone in the session to maintain an adequate distance from one another. She offered an example of how this might work for a welding session; the weld-sample area, welding station and finished-weld-dropoff site were all separated by six feet or more. I-CAR would provide instructors with painter’s tape to mark relevant areas, according to Barrington. 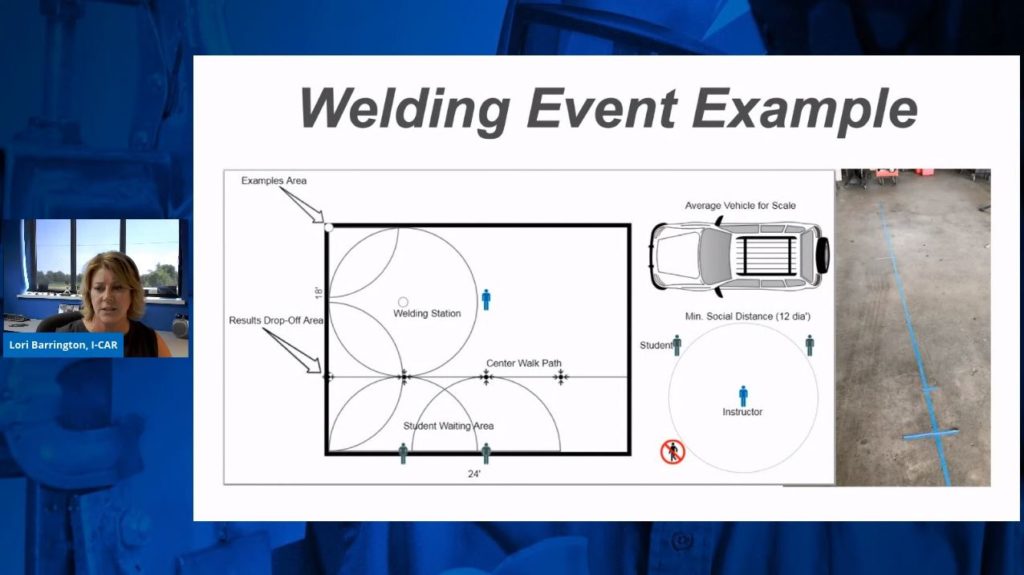 The facility must also keep personnel who aren’t training out of the course area, Barrington said.

This didn’t mean the shop had to close down all other operations. “We just don’t want people walking through,” Barrington said.

Barrington said a shop would also complete COVID-19 questionnaires in the “pre-call” prior to the course and again when the instructor shows up in person.

The instructor will wear a mask the entire course, and students are expected to do so while the instructor is on-site, according to Barrington. I-CAR also wants the facility to be cleaned and sanitized, something Barrington observed shops were probably doing anyway.

If the instructor learns they have been exposed to COVID-19 or are officially diagnosed with it, “we will obviously contact you immediately.” The shop should also notify I-CAR if someone was later discovered to have been exposed to the disease; I-CAR will in turn alert the teacher.

Shops should also ensure they’re equipped with all the tools and equipment necessary for the welding course. Instructors won’t loan out spare gear like they had in the past, for “safety is a main concern,” Barrington said. 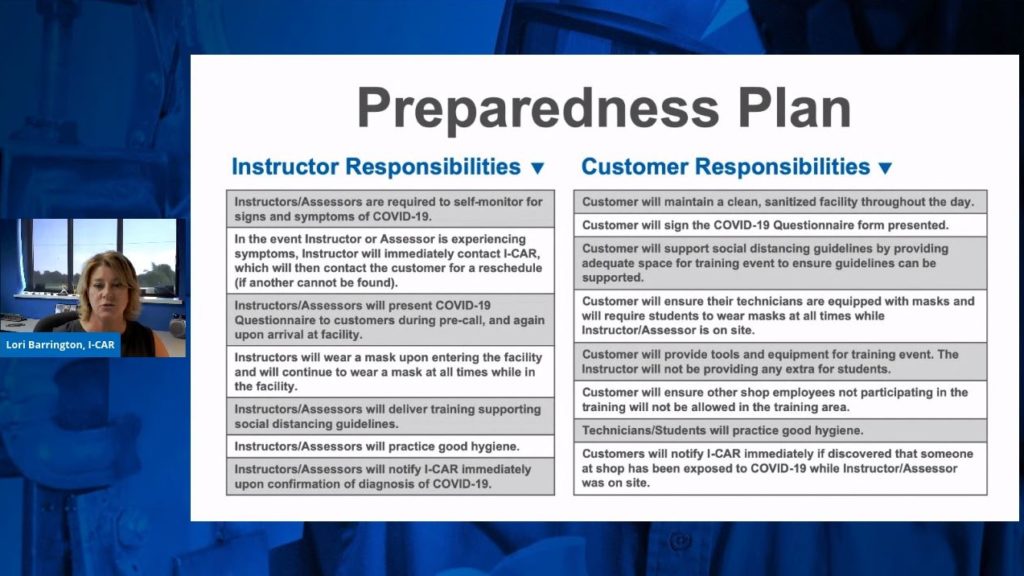 Barrington said I-CAR’s other live classes couldn’t restart yet because I-CAR holds them on neutral ground. About 50 percent of the fixed training sites are trade schools and colleges, she said. The remainder are locations like supplier and OEM training sites.

About 75 percent of I-CAR’s neutral training locations are closed or otherwise unavailable, according to Barrington. These venues also must determine protocols for internal and external usage of the facility.

“We really do need to give them more time to figure this out as they think about their opening plans,” Barrington said.

Hence, I-CAR won’t hold any live classes this summer, she said. It’ll monitor the facilities and be ready to go when the sites are, she said.

As noted above, four main live courses are now virtual and will remain so throughout the summer, according to Barrington. She said I-CAR also is adding additional evening sessions — something which had been in demand — and more class times in general.

Barrington also reminded the industry that I-CAR’s new “50/100” rules start in 2021 for shops who’d been Gold Class before Oct. 1, 2019. Shops will need 100 percent of structural techs to reach I-CAR ProLevel 2 in their segment — which includes welding and hands-on skills development. 50 percent of staff in all other positions must reach ProLevel 2 for their respective roles.

“We do suggest getting ahead of those requirements” with I-CAR reopening, Barrington said. I-CAR right now is holding a “really good” 2-for-1 course deal which can be used for up to six technicians, she said.

“It’s a perfect way to get after those new requirements,” she said.

I-CAR delivery Associate Vice President Lori Barrington said a shop desiring an in-shop I-CAR event must offer enough room for everyone in the session to maintain an adequate distance from one another. She offered an example of how this might work for a welding course; the weld-sample area, welding station and finished-weld-dropoff site were all separated by six feet or more. I-CAR would provide instructors with painter’s tape to mark relevant areas, according to Barrington. (Screenshot from I-CAR webinar)

I-CAR delivery Associate Vice President Lori Barrington said both I-CAR and a shop are expected to commit to certain safety precautions to prevent the spread of COVID-19 during an in-shop I-CAR event. (Screenshot from I-CAR webinar)