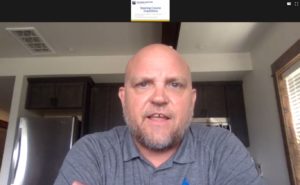 Official automaker repair instructions might direct collision repairers to measure customer steering columns following a collision. The shop might then need to replace any that had collapsed to lengths outside of the specification described.

Collision Hub industry relations director Jason Bartanen told the virtual July 22 CIC a repairer had contacted his company about a situation on a GMC Sierra. The customer’s steering column measured 273 mm, much lower than the 286 mm required by General Motors. But the new OEM replacement column ordered by the shop only came in at 278 mm.

Collision Hub had reached out to General Motors, but the answer wasn’t immediately forthcoming, Bartanen. He said the matter dragged on without OEM guidance to the point the customer’s rental ended. It was a situation where the “chair in the room” — the empty chair symbolizing the customer at CIC meetings — needed an answer, Bartanen said.

Bartanen said the OEM was aware of the measurement discrepancy issue and is confirmed to be working on it. GM didn’t respond to an email from Repairer Driven News asking if it wanted to comment further. 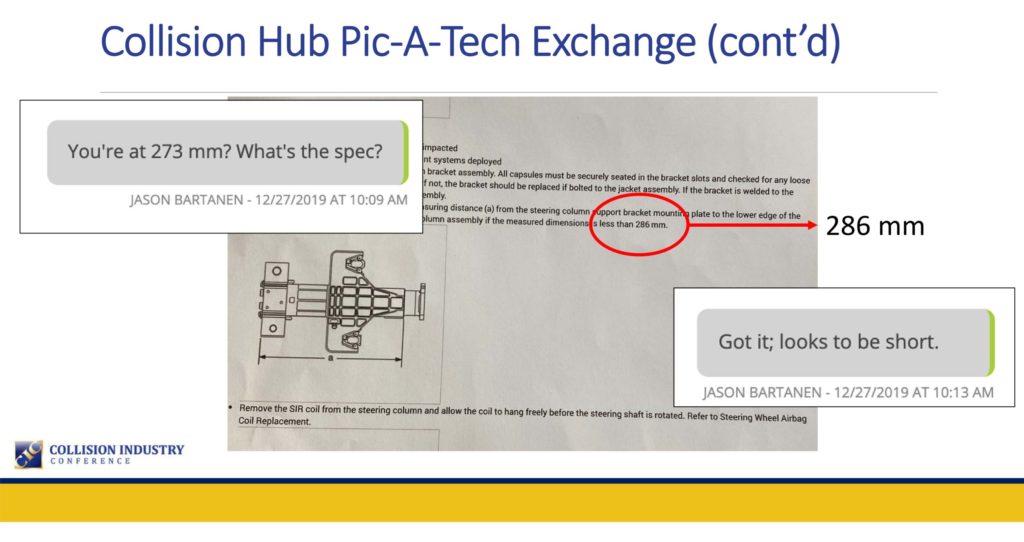 Bartanen said another situation arose with a Nissan Versa struck in the right rear. He said the body shop ordered a new steering column because the customer’s measured short compared to the OEM specifications. However, all the new OEM replacement columns sent also came in equally short, he said. The shop ultimately reinstalled the original column back in the Versa.

Bartanen said Nissan said the difference might reflect the discrepancy between an engineering drawing and the actual production version. “They were hopeful that it would get changed at some point in the future,” Bartanen said.

Asked if Nissan wanted to comment further, Nissan collision network growth and strategy and aftersales manager Mark Zoba said Wednesday he had passed the issue on to the OEM publications team but hadn’t yet received any new information.

“If a shop identifies a concern or has a question, that submittal process should be followed by the shop to ensure the information reaches the correct party for review,” he wrote.

Bartanen said he wasn’t sure what a repairer should do in a situation as the Nissan Versa. He noted that the GM example was even tougher because the customer’s column clearly needed to be discarded — it came up short compared to both the OEM procedures and the replacement part — but the replacement also was out of spec. It’s a “conundrum,” he said.

Repairers were “really in a bind” if a column measured short from the factory, he said.

Bartanen said Collision Hub has volunteered to measure columns at distribution centers and help address the issue. He asked repairers to send him any inconsistencies they encounter. 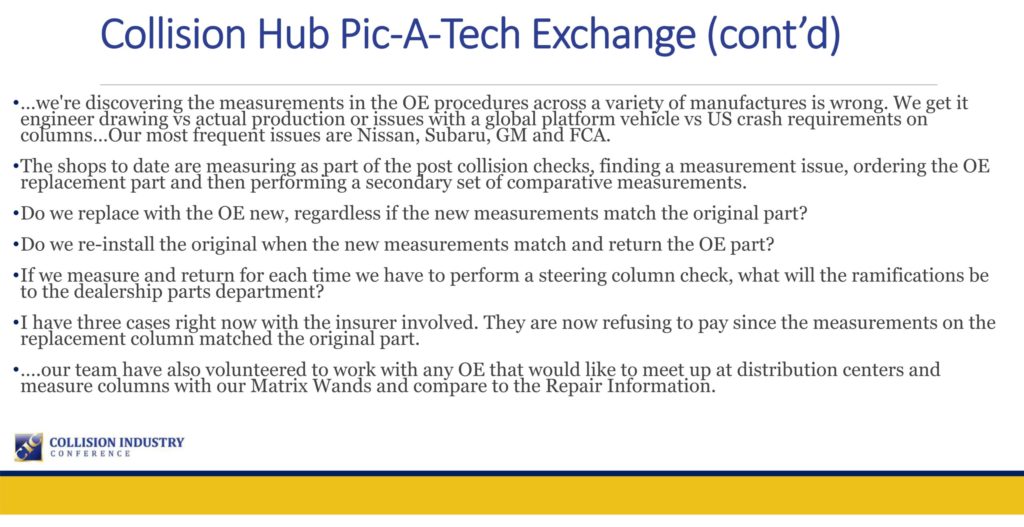 Bartanen said such discrepancies damage the collision industry’s credibility and affect the customer’s perception of the individual body shop. But “my biggest concern” is that such issues compromise what had been growing momentum on following OEM repair procedures, he said.

AkzoNobel’s Tim Ronak also warned that people might try to use this a “glaring example” of why OEM repair procedures shouldn’t be followed at all, even though this instance seemed to be merely a situation of “someone made a mistake.”

Allstate director Clint Marlow wrote in the virtual CIC chat feature that “we need good information to build support of the OEM (recommendations). Until we get good, (credible), unbiased information, I don’t see any way to NOT apply experience and commercially reasonable business judgement.”

He also spoke up to argue that in his opinion, “we are already applying business acumen and commercially reasonable judgment” when shops make decisions about using an aftermarket or OEM scan tool.

“We can get better information,” and fewer things will require judgment calls, but there’s “not much in life that we can just blindly accept without applying some kind of smell test to it,” he said.

Society of Collision Repair Specialists Executive Director Aaron Schulenburg said his organization had been working with OEMs on similar conversations around repair procedure language. Otherwise, a repairer risks a “degree of liability associated with disregarding that.”

Bartanan also presented a more general steering column situation he suggested could stand to be clarified by an OEM as well.

FCA at the time of the repair mandated steering columns “must be replaced” on Dodge Chargers like the one seen below after any “front end collision,” whether or not an airbag fires, based on a repair procedure excerpt Bartanen displayed on July 22.

This specific Charger had struck a raccoon, resulting in the relatively minor damage seen below. Bartanen said the shop handling the repair still replaced the steering column as instructed. 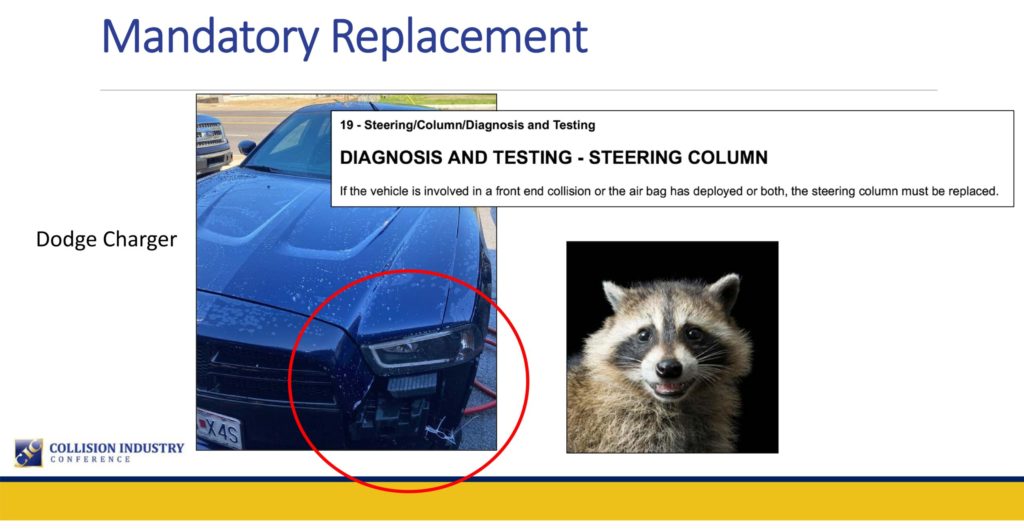 Collision Hub reached out to FCA to see if the OEM would clarify the instructions.

“At the time, the answer was no,” Bartanen said.

Asked if this had changed or it wanted to comment further, FCA said: “FCA recommendations are intended to ensure vehicles are returned to a state consistent with their original condition.”

Bartanen praised Subaru, another OEM demanding significant inspections after a collision, for actually defining the word “collision” in March.

“Subaru defines a collision as damage that exceeds minor outer body panel cosmetic distortion,” Subaru wrote at the time. Bartanan said that applying the “Subaru verbiage” to FCA would probably suggest the Charger-raccoon damage didn’t rise to the level of a replace-the-steering-column collision.

Bartanen also noted that Subaru’s OEM repair procedures offered good diagrams on where a steering column should be measured, and said other OEMs could stand to provide additional clarity like this as well.

On the whole, Bartanen said such steering column issues weren’t “widespread” among OEMs, describing it as limited to the FCA, GM and Nissan matters above.

Collision Hub industry relations director Jason Bartanen during the virtual July 22, 2020, Collision Industry Conference suggested FCA could do with more clarity on its instructions to replace steering columns on this Dodge Charger after every collision. (Provided by CIC)