Allstate on Wednesday said it would cut costs with a restructuring “which will impact approximately 3,800 employees primarily in claims, sales, service and support functions.”

The Wall Street Journal, which interviewed CEO Tom Wilson for a Thursday article, characterized all 3,800 as layoffs rather than less severe measures like reduced hours.

“Implementing this plan is difficult as we still deal with the impact of the pandemic but necessary to provide customers the best value,” Wilson said in a statement Wednesday. “We have expanded transition support for impacted employees including prioritized internal hiring, extended medical coverage, expanded retraining support and help in employment searches.”

Contacted for more details about the impact the cuts would have on auto claims, an Allstate spokesman referred us back to Wednesday’s press release and the 2019 announcement of the “Transformative Growth Plan” that Allstate said included the restructuring.

However, Wilson told the Wall Street Journal that it cut 1,000 of the 3,800 jobs because it gave refunds to policyholders who were forced off the roads by state COVID-19 responses.

Of the layoffs, “somewhere between 25% and 30% are due to the fact that we have fewer claims,” he said.

Claims have rebounded as parts of the country reopen — but shops and insurers will likely still continue to find themselves with less to do. 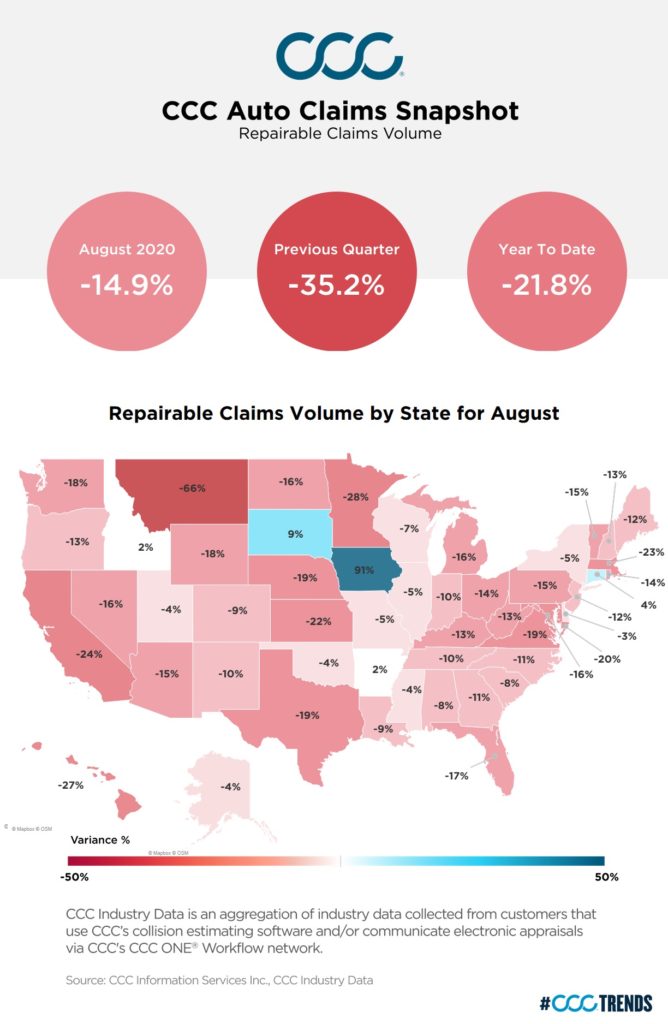 However, things could have been worse if the weather were milder. Non-comprehensive repairable estimates were down 20.5 percent over 2019, CCC said. That’s an improvement over the 24.7 percent year-over-year decline CCC found for July, but still nowhere near where the industry would probably be without the COVID-19 pandemic.

“Areas hit hardest by the wave of COVID-19 infections in California and Texas have slowed claim count recovery in late July and early August, with areas such as San Francisco, Los Angeles, Dallas, Houston, El Paso still seeing non-comprehensive appraisals down between -27 and -30 percent, while volume in other areas such as NYC, Chicago, Atlanta, Denver and others is down between -15 and -20 percent,” CCC director and industry analyst Susanna Gotsch wrote.

Allstate suggested Wednesday its job cuts would come quickly. It said it will pay out $290 million in costs like the severance Wilson described — “with approximately $210 million to $220 million, pre-tax, to be recognized during the third quarter of 2020,” which ended at 11:59 p.m. Wednesday. It said it would pay another $50-$60 million between October and December and the remainder else in the first half of 2021.

The carrier on Wednesday called the restructuring part of the multiyear “Transformative Growth Plan.”

Allstate’s December 2019 announcement of the plan mentioned consolidating all of its insurance brands (Allstate, Esurance, Encompass and Answer Financial) into one business model, eliminating Esurance as a brand, expanding centralized customer service, and enjoying lower expenses.

“Investments in marketing the Allstate brand will be significantly increased by reallocating Esurance spending and reducing operating expenses,” Allstate wrote then.

It’ll be important that Allstate continues to meet state requirements on claims service despite fewer staff.

For example, the Alliance of Automotive Service Providers of New Jersey in August drew attention to a consumer-friendly state requirement that insurers who want to inspect a vehicle must do so in seven working days. Similar mandates exist on the books of West Virginia (7 days), Minnesota (5 days for nondriveable; 15 for others) and New York (6 days).

There’s no requirement a New Jersey shop provide the photos a short-handed Allstate would use for such an inspection, though that’s certainly a choice a repairer can make.

AASP-NJ has even created a form that shops who wish to bill for such a service could use. A shop could tell an insurer that if they signed the form and committed to the fee, “‘we’ll get started right away,’” Executive Director Charles Bryant said. Otherwise, the insurer could either “waive the inspection” or follow the regulation and come out to inspect within seven working days, he said.

Allstate and other short-handed insurers also can’t force a customer to move their vehicle from the customer’s preferred body shop to a direct repair program shop to get that insurer inspection, according to Bryant. The New Jersey Administrative Code inspection requirement describes the insurer conducting the examination “at a place and time reasonably convenient to the insured.” The West Virginia and New York examples above also contain similar language.

The Allstate logo. (Provided by Allstate)