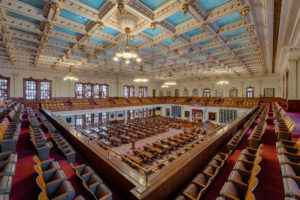 A new Texas bill would require auto insurance policies to not only carry appraisal clauses but make the process more cost-effective for consumers seeking to use RTA to remedy a short-pay.

The umpire’s fees and expenses would still be split equally between both sides.

The appraisal clause process itself under HB 2534 is a fairly standard description of the concept.

If the insurer and customer can’t agree on the amount the carrier owes in a loss — the value of a totaled vehicle or the appropriate amount to fix a repairable vehicle — either party can invoke their right to appraisal within the first 90 days after a claim’s filing.

The umpire also “shall determine the amount of loss.” If either appraiser agrees with the umpire, then that amount is binding.

Pretty straightforward, and similar to the Texas Department of Insurance’s generic description of the process. However, the reimbursement rules HB 2534 would enact appear to be a little more unique:

(a) Each party is responsible for the party’s appraiser’s fees and expenses.

(b) If at the end of the appraisal process the amount of loss is determined to be more than $1 greater than the amount of the insurer’s proposed undisputed loss statement, the insurer shall refund the named insured’s reasonable out-of-pocket expenses for the insured’s appraiser’s fees and expenses.

(c) If at the end of the appraisal process the insurer’s proposed undisputed loss statement is determined to be just, the named insured shall refund the insurer the insurer’s appraiser’s fees and expenses.

(d) All other appraisal expenses, including umpire expenses, are shared evenly between the parties.

This language resolves a problem with the appraisal process: The fact that a customer must pay for their own appraiser, and perhaps half of an umpire, disincentivizes consumers from using the process on certain claims, or even at all. The automotive repair lender DigniFi recently argued that most Americans don’t have an extra $500-$600 for unexpected expenses.

A Washington state legislative hearing last month raised this issue. Mike Harber, a licensed professional appraiser who represented the Professional Automotive Repair Alliance, told a House committee he represented 87 insureds in disputes with their carrier in 2020.

“We won every single one of those claims,” he said. But clients have to pay for his help, and the average consumer couldn’t afford the cost of exercising their auto policy appraisal clause, he said.

During a November Collision Hub broadcast, Vehicle Collision Experts CEO and professional appraiser Mark Olson pointed out how exercising an appraisal clause could result in a pyrrhic victory for the customer.

“You spent a grand to chase $1,500,” Olson said. Small-claims court makes more sense, according to Olson.

Collision Hub CEO Kristen Felder, another professional appraiser, said the process could involve an appraiser’s fee of $495-$600 and half of an umpire’s $600-$750 bill. (Assuming an umpire is needed.) She said she advises that it’s not worth pursuing an RTA without at least a $3,000 difference between the shop and insurer estimates.

Oregon has for a decade addressed this issue with ORS 742.466. That law only allows the consumer to recoup “reasonable appraisal costs” if the insurer’s last offer was find to be lower than the amount awarded in the appraisal process. The state’s auto premiums remain lower than the national average, based on NAIC data.

As noted above, the Texas bill would even grant the insurer the same capability if the RTA process proved their last offer was “just.”

“We’ve had very good success” using the process for OEM parts and following OEM procedures, he said of his customers. He said they typically don’t bother until the disputed amount significantly exceeds $1,000, and most customers don’t pursue it until at least the $2,000 mark.

HB 2534 would still leave the consumer paying half of the umpire costs. But McKenzie said it’s rare that an umpire is required. In his customers’ experience, the insurer and customer’s appraisers can agree on an amount on their own.

“We’re hoping that one can be an easy rubber-stamp” McKenzie said Thursday. There’s “little for them” to argue about, he said.

“We’re really playing off of that,” Tuggle said.

HB 2534 is sponsored by Rep. Travis Clardy, R-Nacogdoches. McKenzie said the bill doesn’t have a Senate sponsor yet, but automotive dealership trade groups support the bill, and that industry has a senator in mind. A dual-chambered bill should have a better shot in a session which is likely to be consumed with issues like redistricting and the recent Texas cold weather and ensuing outages.

“There’s not a whole lot there to argue against,” McKenzie said.

Most insurers contain appraisal clauses in their policies, and the Texas Department of Insurance advises consumers to consider them for disputes resolution.

“We really aren’t asking for anything new here,” Tuggle said.

However, at least one carrier — Texas’ No. 1 auto insurer State Farm — has removed language permitting a right to appraisal on repairable vehicles.

The Texas House of Representatives is seen Jan. 6, 2014. (gnagel/iStock)