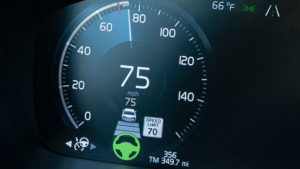 Adaptive cruise control involves the car automatically controlling its speed to maintain a set distance from the vehicle in front while meeting as best it can the velocity demanded by the user. In some iterations, the vehicle can also keep itself centered in the lane. The speeding findings published in March by MIT and the IIHS suggest two ramifications for collision repair.

First, the behavior might undercut the crash prevention benefits of the technology, restoring some of the crash volume eroded by adaptive cruise control.

“(A)n analysis of insurance claims data by the IIHS-affiliated Highway Loss Data Institute and other research indicate that ACC may lower crash risk,” the IIHS wrote. “Other studies have shown that these systems maintain a greater following distance at their default settings than most human drivers and suggested that they reduce the frequency of passing and other lane changes.”

Second, the use of higher velocities would seem to heighten the need for shops to restore the vehicle and its ADAS properly.

If drivers are going to rely on a technology to speed without crashing into the car in front of them, then that technology would seem to need to work pretty well. Sure, the driver retains responsibility for their vehicle and their situation, but there’s a question of how well they’re supervising and how quickly they react.

“ACC does have some safety benefits, but it’s important to consider how drivers might cancel out these benefits by misusing the system,” study lead author and IIHS statistician Sam Monfort said in a statement. “Speed at impact is among the most important factors in whether or not a crash turns out to be fatal.”

The IIHS estimates that 17 percent of the model year 2020 fleet has adaptive cruise control.

According to the IIHS, adaptive cruise control systems permit the user to exceed the posted speed limit, which is interesting considering road sign detection is another piece of ADAS found in some cars.

The IIHS looked at 40 drivers. Some used a 2016 Land Rover Evoque with a purely adaptive cruise control systems, while other had a 2017 Volvo S90 with both ACC and the ability to center itself in a lane.

Drivers were 24 percent more likely to speed when the ADAS was operational, according to the IIHS.

“The amount by which they exceeded the speed limit when they did speed was also greater when they were using the driver assistance features compared with driving manually,” the IIHS wrote.

Everyone sped the most in 55 mph zones, regardless of whether the ADAS was active. They averaged about 63 mph there.

Drivers didn’t exceed the posted limit by as many mph when they reached 60 or 65 mph zones. In both cases, the average speeder was doing 5 mph above the limit.

“ACC also had the largest impact on how much they exceeded the limit in zones where it was 55 mph,” the IIHS wrote. “In these slower zones, they averaged a little more than 1 mph higher over the limit when using ACC or Pilot Assist than they did driving manually.”

The IIHS said that while 1 mph sounds insignificant, it actually means a 10 percent higher risk of a fatal crash.

“Driving faster is more dangerous,” Monfort said in a statement. “You can’t argue with physics.”

“The speed differences observed in the current study were associated with a potentially substantial increase in fatal crashes (+10%), injury crashes (+4%), and property-damage-only crashes (+3%),” Monfort and the other authors wrote

So should OEMs or the government force adaptive cruise control to have a lower maximum speed or be tied to that area’s limit? The IIHS makes an interesting point here, noting that this could backfire if it would “discourage risky drivers from using ACC altogether.”

The IIHS also pointed out that it didn’t study factors that might mitigate the effect of the additional speed.

“For instance, it’s possible that drivers who set their systems at higher speeds also selected a greater following distance,” the IIHS wrote. “ACC systems are also designed to respond sooner and less abruptly than human drivers when the vehicle ahead slows down.”

(We note again the need for the ADAS to be working properly so it actually knows the following distance and can detect the vehicle ahead.)