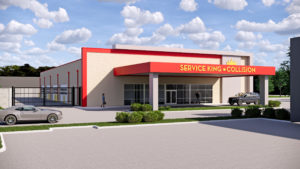 Service King has warned its lenders that it is running out of cash and may not be able to repay debt, endangering its ability to remain in business, Bloomberg News has reported.

Sources also told the news organization that the company has entered into a sale and lease-back agreement with some of its real estate holdings, generating $66 million in gross proceeds.

The sources asked not to be identified because the results were private, Bloomberg reported.

Service King, which lists 345 locations in 24 states, reported a loss of $6 million in adjusted earnings during the third quarter. That’s in comparison to the $5.4 million loss it reported in the same period in 2020, and the $27 million gain reported for the third quarter of 2019, sources told Bloomberg.

On Sept. 27, Moody’s Investors Service downgraded all ratings of Midas Intermediate Holdco II, LLC (doing business as Service King), to Caa3 from Caa1, which is considered of poor standing and very high risk. Moody’s cited the company’s “weak liquidity,” and its need to reduce its bonds outstanding to below $135 million by to avoid triggering a call on its loan beginning June 1, 2022.

The company’s probability of default rating was also downgraded, to Caa3-PD from Caa2-PD.

Even taking into account the effect of the COVID-19 pandemic on the collision repair industry, Service King’s metrics “remain weak,” Moody’s said. Revenue totaled $265 million in the quarter ended Oct. 2, the WSJ reported, up 27 percent year-over-year but down about 18 percent from 2019.

“Moody’s believes that these risks well outweigh Service King’s solid market position in the highly fragmented collision repair sub-sector, and its mutually-beneficial relationships with national and major insurance carriers which represents the vast majority of revenue. While demand fundamentals are improving as miles driven creep up, there is limited visibility as to the velocity of the improvement in this key industry metric,” Moody’s said.

The Wall Street Journal reported on Sept. 22 that the company had begun to skip cash interest payments, conserving cash by tacking on additional debt to the loan balance.

In response to the pandemic, Service King had converted more than 90 of its locations to skeleton-crew intake facilities and furloughed 35 percent of its workforce, according to Moody’s.

In August 2020, Service King CEO David Cush announced that the MSO would recall some furloughed staffers and restore a few dozen intake-only satellites back to full-production facilities.