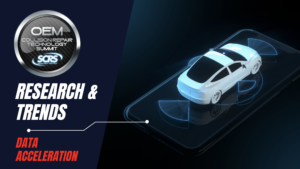 Telematics-enabled auto insurance is becoming accepted by consumers at a rapid pace, and developments in crash-site information gathering and processing promise to bring benefits for collision repairers, according to a vice president with Cambridge Mobile Telematics, a leading firm in the field.

Ryan McMahon, vice president of insurance and government affairs at Cambridge Mobile Telematics, said telematics have the capability of providing all of the pertinent information about a crash to an insurer within 10 minutes of the event, streamlining the claims process.

“Every insurance carrier does not have this capability today in market. They’re not all marketing it,” McMahon told the audience at an OEM Collision Repair Technology Summit session on Nov. 4, during the 2021 SEMA Show in Las Vegas. “But it is coming.” 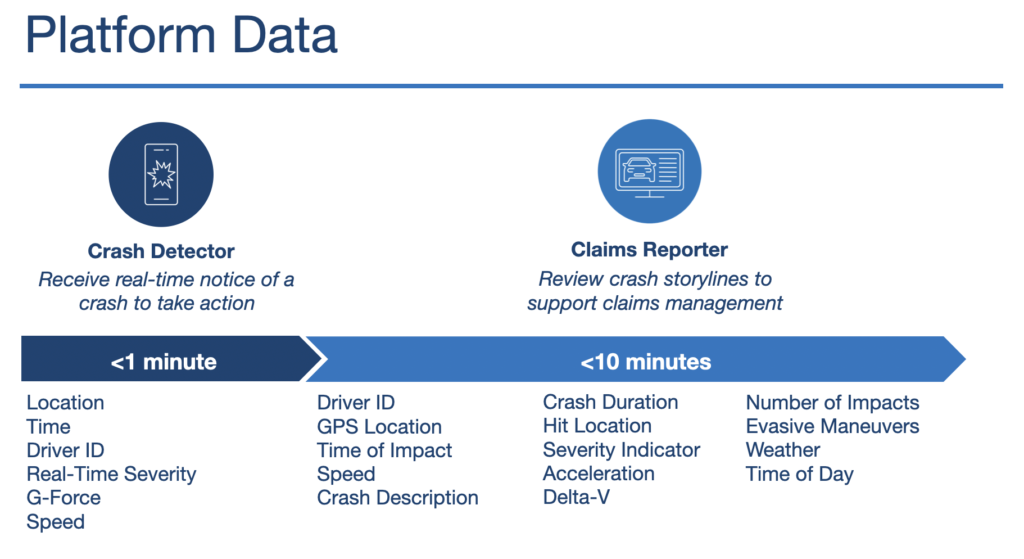 “We’re not saying that after the crash happens we’re going to order, you know, all the parts and all that stuff. That’s not what this is. This is not hocus pocus,” he said.

“This is the basics. This is getting the fact that you know the crash happened, you know, the physics of the crash,” he said. By “ingesting” the data, he said, carriers can “[get] it out the door quicker and into the hands of the professionals to solve it. And that capability is driving huge value for the [insurance] industry.”

(Registration for the digital delivery of McMahon’s talk and the entire 2021 Repairer Driven Education (RDE) series has been opened by the Society of Collision Repair Specialists. It can be accessed at https://rde.scrs.com.)

McMahon said that two major insurers, Farmers and USAA, have digital crash data programs in place and are heavily promoting them to consumers, while an estimated 75 percent of major carriers are focused on adopting similar technology.

A combination of data provided through the cellphones of drivers who opt in to such collection and by services such as GM’s OnStar and Subaru’s StarLink, when available, can provide real-time notification that a crash has occurred, a potentially life-saving benefit that consumers desire, McMahon said.

It can also give carriers a virtual ringside seat to a crash, telling them virtually everything that’s needed to know how a crash occurred, and who’s at fault. This, he said, can dramatically simplify and speed up the claims process.

To an insurer, he said, cycle time represents cost. “Whether that’s rental car, whether that’s storage, whether that’s the number of files that have to be open on an individual adjuster’s desk. No claims, none of them, age well. The longer the cycle time, the worse it is for the insurance industry.”

Through the information provided by telematics, “cycle time is decreasing substantially,” McMahon said. “We have insurers who have told us that their cycle time is 50 percent faster. And cycle time, I think, is going to be a key ingredient in profitability for your business. A car sitting there [awaiting authorization for repair] does not really help anybody.” 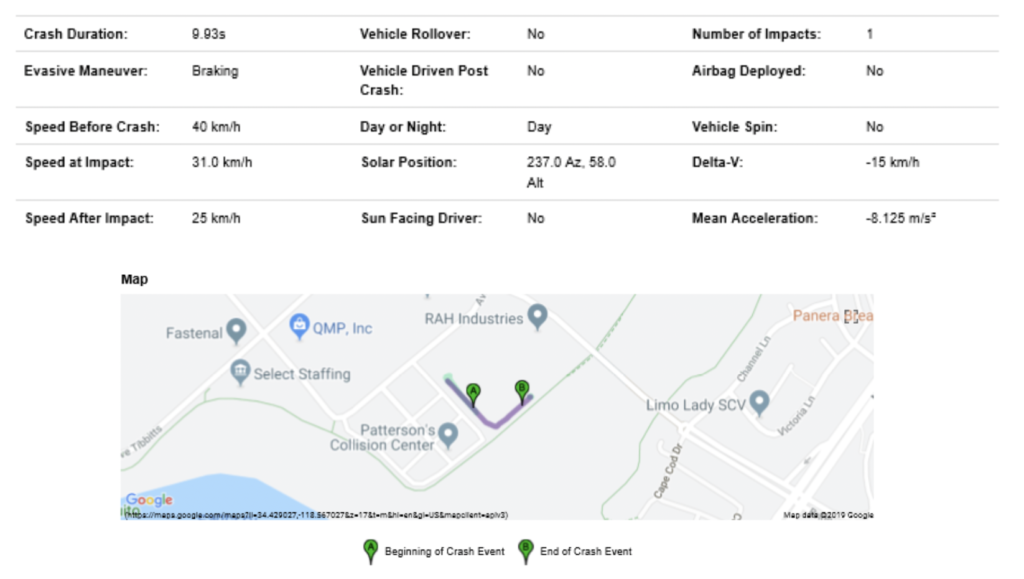 “But the really important thing [for collision repairers] is the predictive models on total loss, and this is where the industry thinks there’s a tremendous amount of value of being able to identify if that crash is a total loss or not, and being able to direct it ultimately to the place that needs to go first,” he said.

Telematics, he explained, provides insight into crash severity by identifying the vehicle’s change in velocity. This information can help collision repair facilities resolve repair disputes, and automatically identify a total loss — before the vehicle leaves the scene of the accident.

“I don’t honestly know whether or not … the collision repair industry looks at this as a good thing or a bad thing,” McMahon said. “I don’t know enough about the economics, but I would assume that there’s higher value in being able to facilitate the repair of the vehicle as opposed to dealing with cars that you’re not going to do anything with anyway.”

(Mike Anderson, CEO of Collision Advice, has identified this technology as a threat to vehicle storage fees, which he described as a collision stream for some repairers. “As we see artificial intelligence enter into our industry, you’re gonna see less total losses end up in your shop,” he told an Oct. 29, 2020, Collision Advice-CRASH Network webinar.)

McMahon said that eliminating questions about a crash — including the elemental question of whether a fraudulent claim is being filed — makes the process faster and more pleasant for the consumer. 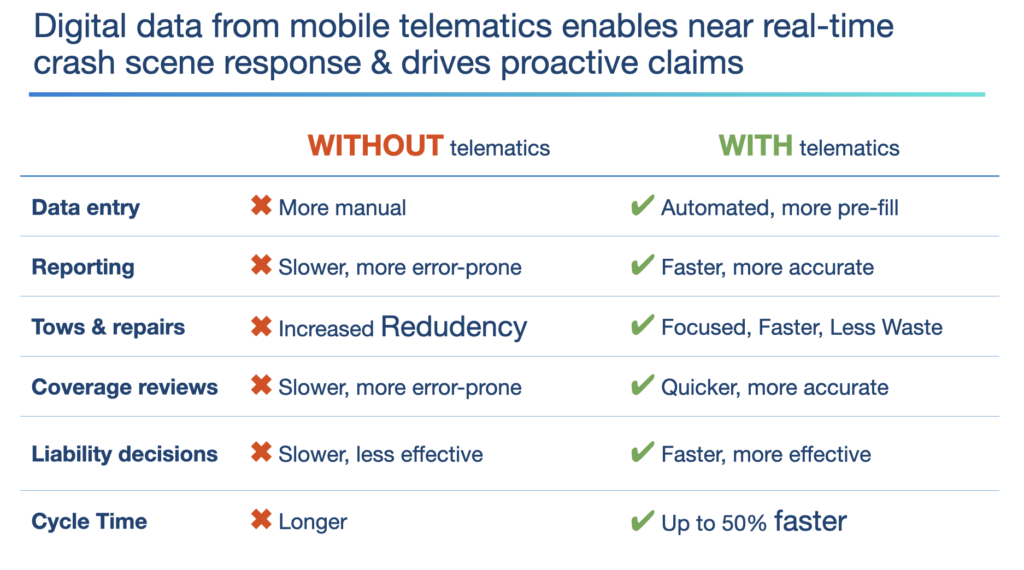 Asked by an audience member if crash data collected through telematics could be used by an insurer in a lawsuit, McMahon said he was not aware of any such use yet.

However, he noted that the same information can also be extracted from components in a vehicle’s airbag control module, though at considerably more trouble and a cost of $2,000 to $3,000 per vehicle.

Like the airbag data, the telematics data can be subpoenaed in the course of a trial, he said. Telematics, he added, is not really creating new information, just creating it in a way that’s more cost-effective and accessible.

Asked whether telematics might be used as a way for carriers to steer customers to a DRP shop, McMahon responded, “possibly, for sure.”

“But ultimately, it’s the customer’s decision on what they do. The challenge that happens right now when a crash happens is the customer doesn’t really know what to do.”

He added that what’s “incredibly important” is to determine the ultimate disposition of a damaged vehicle, whether that’s a repair shop or a salvage yard. That efficiency should benefit all of the industries involved, he said. 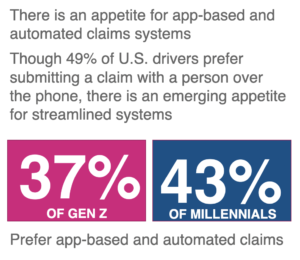 The choice of a telematics-based insurance program is ultimately up to consumers, and McMahon said that the combination of incentives like rewards for targets met and potential reductions in premiums have brought a highly positive response.

In addition, having an app that can alert emergency personnel in the event of a crash is highly appealing, he said. “The fact that they know that they have a guardian angel looking out for them is amazing, if it’s positioned in the right way.”

Among Generation Z drivers, those born between the mid-to-late 1990s and the early 2010s, 37 percent prefer app-based claims processes. Among Millennials, generally those born between born from 1981 to 1996, the number is even higher, at 43 percent.

The primary factor holding consumers back from enrolling in such telematics programs, McMahon said, is a concern about what kinds of data are collected, and the privacy of that data — where and for what it might be used, and by whom. 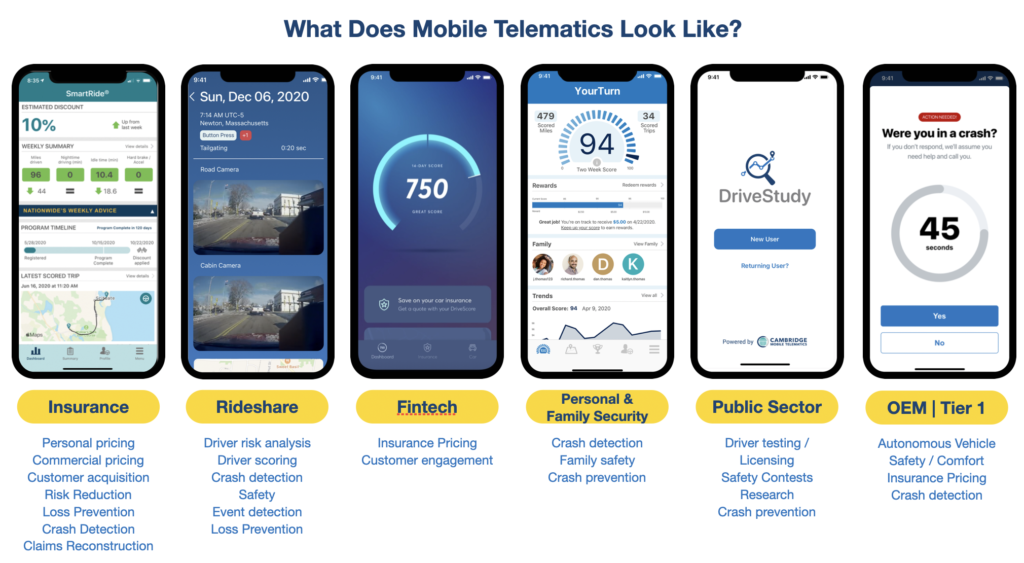 While this is a matter that lies between insurers and their insured, McMahon said all carriers spell out the privacy policies of their apps, and require consumer approval of the use of their data. And while he could not speak for all companies, he noted that Cambridge works with 21 of the 25 largest insurers, none of which sells its customers’ information.

McMahon concluded with an invitation to repairers to continue the conversation by sharing with him the effects they experience with the new technology.

“We’re not experts in claims management. We’re not experts in the elements of reconstructing cars, that’s your business. But we hopefully can help facilitate these pieces,” he said. “And I’m very interested in the feedback as this starts to roll out, how we can make this smoother, because, ultimately, it is about the consumer and making the…process faster to get the car done. Letting you guys do your job.”

Find this and other sessions available at https://rde.scrs.com.