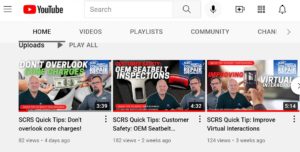 The five most recent “Quick Tips” videos released by the Society of Collision Repair Specialists since Nov. 18 contain some important reminders and explanations that will help repairers get quicker estimate approvals, ensure continued seatbelt safety and more.

The videos feature Mike Anderson, CEO of CollisionAdvice.com and Danny Gredinberg, Database Enhancement Gateway (DEG) administrator. Bud Center with I-CAR also shares some tips in one of the videos.

Here’s a roundup of the tips posted on SCRS’ YouTube channel:

Estimating software includes a “c” next to the price of each part, which stands for core charge with the replacement part, Gredinberg said.

He recommends saving all parts until the end of each repair so that once the damaged part is gutted, it can be sent back to the supplier to get the core charge credit back. Shops should note on the estimates what parts should be saved because the “c” may not print out on the estimate, Gredinberg said.

If the part isn’t there, the bill payer should be notified that the shop will need to bill them to cover the core charge.

A recent survey found that 60% of shops have never asked to be paid for seatbelt safety inspections, Anderson said. He noted that’s of great concern to him because that could mean shops aren’t inspecting seatbelts.

The type of inspections vary by OEM from visual, scanning with a tool and/or multiple test drives at different speeds and breaking conditions. If child safety seat latches were being used during the crash, a lot of OEMs state they’re one-time use parts and need to be replaced, Anderson said.

For more information, watch the “Quick Tip” video about how to use owner manuals and visit DEGweb.org for links to download owner manuals.

“Why Pre-Diagnostic Alignment is Critical to the Repair”

Bud Center with I-CAR said OEM procedures on pre-diagnostic alignment should always be followed to determine when it’s required. For example, advanced driver assistance system (ADAS) isn’t just an ADAS repair, he said. For example, repairers need to think about how the ADAS repair ties into anti-lock brakes and vehicle stability control.

I-CAR’s Repairability Technical Support (RTS) website includes an ADAS resources section that shows what systems vehicles may be equipped with by entering in vehicle year, make and model. It also states which systems require calibration and what type and more, Center said.

Anderson noted that pre-diagnostic alignment isn’t included in estimates. Repairers can submit an inquiry on DEGweb.org for proof to include with estimates.

Audatex, CCC and Mitchell each have different clear coating formulas.

Paint time is based on the dimensions of a component so the process should begin by measuring the component then submit the measurements to DEG for a labor time, Anderson said.

While most OEMs have a position statement on clear coat application, those that don’t say repairers must adhere to paint manufacturer guidelines to qualify for a lifetime warranty, according to Anderson.

If there isn’t extended clear coat up until the natural breaking point, an “up and over” is required, which means clearing the roof rail, quarter panel and roof all the way “up and over.”

According to CCC, the laser welded roof seam is not a natural break point for paint to stop at or for clear coat to end at, so continue on to the roof and then down the opposite quarter panel, if needed, Gredinberg said.

“More and more shops are removing the doors and in some cases even the fender and they’re clearing the entire uniside,” Anderson said. “That’s not an included operation.”

Gredinberg called it a time saver because of “not having to mask the edge or having to go back and polish that line out.”

“I can see the need for repainting the whole side in one continuous application,” he said.

Featured image: A few of the most recent “Quick Tips” videos released by the Society of Collision Repair Specialists (SCRS) since Nov. 18. (YouTube Screenshot/SCRS)