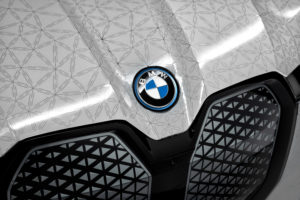 At the 2022 Consumer Electronics Show on Wednesday BMW unveiled a new exterior color changing technology developed with E Ink for the BMW iX.

BMW says the prospective “future technology” would allow consumers to change the exterior shade of their vehicles. E Ink says BMW has the creative freedom to customize the patterns and materials.

“Digital experiences won’t just be limited to displays in the future,” said Frank Weber, BMW AG, Development Board of Management member, in a press release. “There will be more and more melding of the real and virtual. With the BMW iX Flow, we are bringing the car body to life.”

“How a manufacturer would go into actual production would determine the repairs process,” he said. “However, because it’s a film, a collision repairer can assume that repairing a section of the car would also suggest a section of the film would be replaced as well.”

The electronic ink is made up of millions of tiny microcapsules filled with white and black pigments that are moved up or down using an electric field to change the surface color. A specially developed body wrap is tailored precisely to the contours of BMW’s all-electric Sports Activity Vehicle. 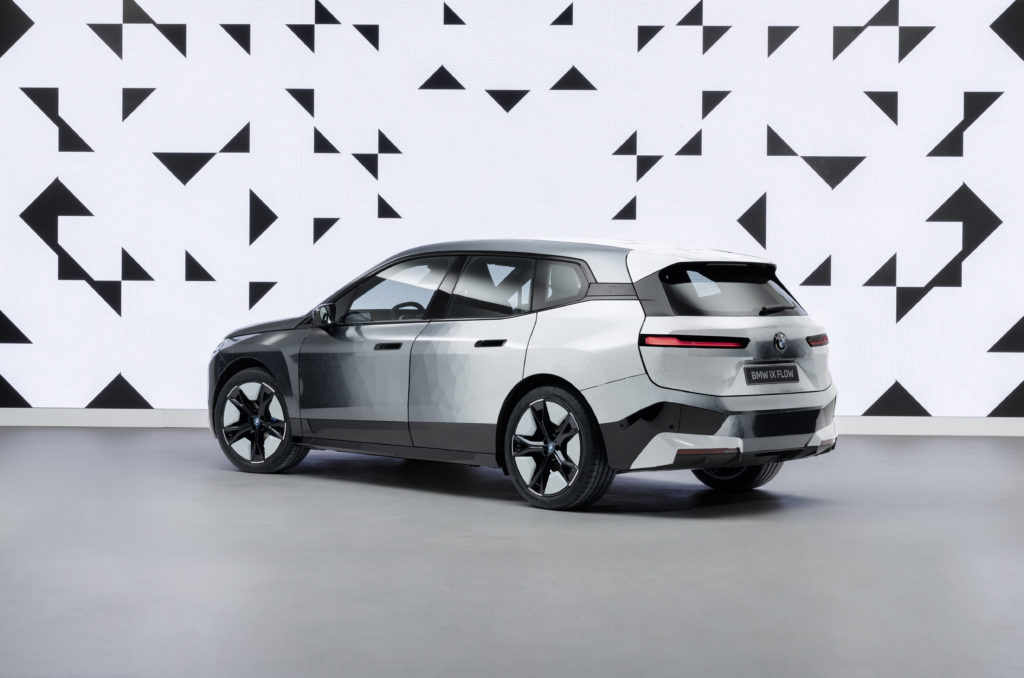 E Ink says the “innovative and rugged” digital paper paired with BMW’s intelligent design algorithms enables the exterior to change from black to white in a dynamic flow with the use of its programmable and flexible E Ink Prism film – a form of digital paper. Laser cut ePaper segments are applied then the power supply for stimulating the electrical field is connected and the entire body is warmed and sealed.

But it isn’t just about outward appearances. A switch to black, or a darker color will absorb more warmth from the sun and white, or a lighter color will reflect sunlight to decrease interior heating during warm weather. Either way, the right color change will reduce strain on the vehicles because electric heat and air will be used less.

The BMW Group plans to eventually offer the technology inside its vehicles after further development that is now underway.

“Because E Ink is incredibly low power, durable and flexible, we can put the display technology on nearly any surface, transforming it into something dynamic and spectacular,” he said. “As a first-of-its-kind concept car, the BMW iX Flow shows what’s possible – how we may experience the world around us in the future.”

Most displays emit light but E Ink film doesn’t. Instead, it reflects ambient light giving the display a paint-like appearance.

The tech concept comes after BMW’s introduction of a new robotic technology in October that allows the application of several colors and designs without stencils or masking, which will be piloted outside the OEM’s own fleet this year.

BMW isn’t the only OEM exploring color tech. MINI Global last year began offering a multitone roof on three- and five-door MINIs as well as Clubman MINIs. The automaker uses a wet-on-wet painting process to produced the gradient roof. Each is one-of-a-kind and can be refinished by authorized repairers.

Featured image: A close up shot of BMW’s iX sporting E Ink’s digital paper with electronic ink microcapsules that when moved up or down using an electric field change the vehicle’s surface color. (Photo courtesy of BMW)