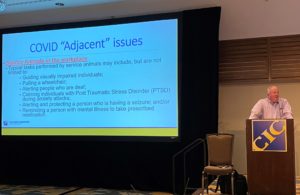 King also gave some tips on drug and alcohol policies as well as service animals at work.

SCOTUS on Jan. 13 issued a stay on President Joe Biden’s federal mandate to require COVID-19 vaccinations or testing at businesses with 100 or more employees, which many trade groups have called a win for small businesses. The 6-3 decision means, at least for now, the U.S. Department of Labor Occupational Safety and Health Administration (OSHA) doesn’t have the authority to mandate vaccines. King, who is a labor and employment attorney, said the Court reviewed an application for injunctive relief until there’s time for further evidentiary hearings. Vaccine decisions are now back at the state level.

The ruling has nothing to do with whether vaccines are good or bad or effective or ineffective but rather if OSHA has the authority to regulate and impose a vaccine mandate on a certain class of employers at a federal level, King said.

“On the procedural issues, I think they [SCOTUS] got it right because they came down and they said vaccines are more of a general public health measure,” King said. “OSHA could only regulate workplace safety standards. … The only governmental bodies that have the authority to issue regulations and deal with general health standards and public health measures are the United States Congress and the states themselves. That’s why the states sued federal OSHA is because their authority was being taken away from them.”

OSHA states the COVID-19 Emergency Temporary Standard (ETS) was issued and is “necessary to protect unvaccinated workers from the risk of contracting COVID-19 at work.”

About half of the 50 states that sued OSHA in several district courts argued that the federal administration can’t mandate vaccines, King said. Because some courts agreed and others didn’t, the issue made it to the Supreme Court.

Businesses with less than 100 employees don’t have much to worry about right now other than keeping an eye on state and local regulations. “The feds say follow CDC [Centers for Disease Control and Prevention] guidance,” King said. “Your states, for the most part, say follow the CDC guidance and that is with regards to isolation and quarantine and that’s based on vaccination status.”

The SCOTUS ruling shouldn’t be confused with another ruling by the court that allows COVID vaccine mandates for health care workers.

So what can employers require right now? King said employers can do three things:

King added that employers should keep the religious legal exemption in mind. “This is becoming the lawsuit du jour – dealing with religious accommodations – for people who don’t want to get vaccinated,” he said. “It’s a very broad standard that protects them.”

Drugs in the workplace

Although many states have legalized marijuana for medicinal or recreational use, King pointed out that it’s still illegal under federal law.

Marijuana use among employees out of work due to COVID has increased seven to eight times compared to before the pandemic, King said.

“In many states, including my little corner of California, they’ve made drug users a protected class that have more rights; rights that are on par with the traditional protected classes of race, religion, color, sex, national origin,” he said.

To enforce no drug use in the workplace King said drug and alcohol policies shouldn’t say employees can’t be “under the influence” at work. Instead, a zero tolerance policy should be in writing. “Under the influence” allows, for example, some alcohol use because in states that allow a legal 0.08% blood alcohol content level under federal law, 0.07% BAC isn’t considered under the influence.

Service animals in the workplace

In the last six months King said he’s seen lawsuits and has received a lot of questions about service animals at work because many employees that have been working from home with their animals want to bring them to work. So what’s legal?

First of all, under the Americans with Disabilities Act (ADA), employers must provide reasonable accommodations for disabled employees to perform the essential functions of their jobs. The ADA defines a service animal as a dog or miniature horse that has been trained to perform tasks for a person with a disability. The ADA doesn’t recognize emotional support, well-being, comfort, companionship or guarding animals as service animals.

If the employee’s need is obvious, such as someone who is visually impaired, the service animals must be allowed. If it’s not obvious, employers can ask if the animal is needed due to a disability and what tasks they’re trained to perform. That’s where the questions end, King said. Employers can’t ask for documentation of the employee’s disability nor can they ask for certification, training, or licensure documentation of the animals, or a demonstration of the animal’s ability to perform the tasks required by employees.

Keep in mind, the animal can be removed from the workplace if it becomes disruptive or a danger to other animals or individuals.