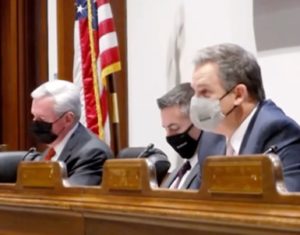 More than 30 people, nearly all members of the collision repair industry, testified Tuesday before a special commission created to consider auto body labor rates paid by insurers in Massachusetts.

During the four-hour-plus virtual hearing, speaker after speaker told the commission that auto insurers’ refusal to pay a labor rate of more than $40 over the past 30 years has caused real pain in the collision repair industry, threatened its survival and put members of the public at risk.

Calling the $40 rate “absurd,” “dangerous,” “criminal,” “insulting” and “a disgrace,” speakers called on the 15-member commission to endorse a bill currently before the Legislature that would raise the rate and tie it to the region’s Consumer Price Index.

That bill, H.1111, is currently being considered by the Legislature’s Joint Committee on Financial Services. 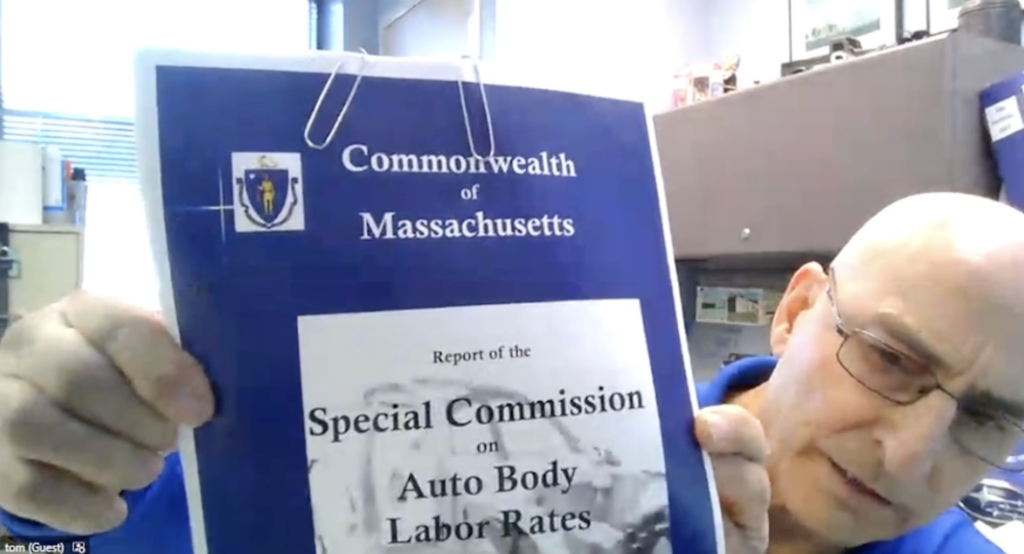 Many speakers noted that the recommendations of a similar commission created in 2008 to address the labor rate issue were never adopted, and they blamed an insurance industry that they said is unfairly suppressing rates.

“There is no need to waste any more time on this study,” said Tom Ricci, owner of Body and Paint Center of Hudson and legislative chairperson for the Alliance of Automotive Service Providers of Massachusetts (AASP-MA), who served on the 2008 commission.

“From ’88 to 2008, all the information is compiled in that other labor rate report. Enact that, work on it, update the information, and we’ll have everything we need. But act on it, please. This has been way too long that nothing has taken place,” Ricci said.

Matthew Ciaschini, of Full Tilt Auto Body, expressed frustration that was echoed by many other speakers during the day.

“In the time we have been in business, we have seen little to no movement on the insurance reimbursement rate, despite recommendations from our last labor rate commission, despite the rise of minimum wage, despite the rising costs and expenses, and despite the rate of inflation over the years,” Ciaschini said. “Quite frankly, I’m appalled that something so obvious needs to be studied.”

Several speakers talked about losing technicians to shops in neighboring Rhode Island, Connecticut, Vermont, New York and New Hampshire, where allowed rates are higher, and the difficulty of attracting new technicians to the field when pay scales are below those of competing trades. It’s of particular concern when the average age of technicians in their shops is in the mid-50s, or higher, they said.

“How can we hire the kids to come into the industry when they’ve got to pay for tools? They’re exposed to chemicals in the spray booth. Paint, welding, grinding — it’s not an easy or safe industry. It’s dangerous,” Matthew Penacho, of Mike’s Auto Body, said.

James Marshall, the owner of Marshall’s Autobody, who serves on the board of the Shawsheen Valley Technical High School, said he has seen the decline in interest among students. “Since I took on that role some 20 years ago, there was a graduating class of no less than 10 per year, and now it’s down to two or three,” he said.

“We’re struggling to get kids in our own program due to the labor wages that they [insurers] want to pay,” said Tim Arruda, an auto body instructor at Upper Cape Cod Regional Technical School. He said his informal survey showed that hourly rates in the field are $100-$125 for plumbers and carpenters, $75 to $100 for electrical technicians, $100 to $125 for auto mechanics, and $40 for collision repairers.

“We’re having a tough time selling to these young teenage kids who come into our program, trying to look for a future,” he said.

Ed Clark, the corporate fixed operations director for the Herb Chambers companies, the largest automotive retailer in Massachusetts, said his company has “invested millions of dollars in facilities, equipment, and training to provide the state citizens with quality repairs.”

“We can’t afford to pay the the repairing technician a fair wage to be able to repair these cars and earn a living,” Clark said. “Many of my technicians are at retirement age now. And I really don’t know where we’re going to turn to, to find replacements.”

“We are working on incredibly sophisticated vehicles,” Dan Wenzel, of Wenzel’s Auto Body, testified. “They require talented, smart and highly trained technicians. Advanced steels, ADAS systems, you’ve heard it all already from all of my colleagues.

“If a significant rate increase does not happen ASAP, it will negatively affect Massachusetts consumers, resulting in balance billing for rates not covered by insurers, even longer lead times to repair vehicles due to technician shortage. There is a massive backlog in most shops that I know, so the lead time is growing and it’s growing more each day,” he said. 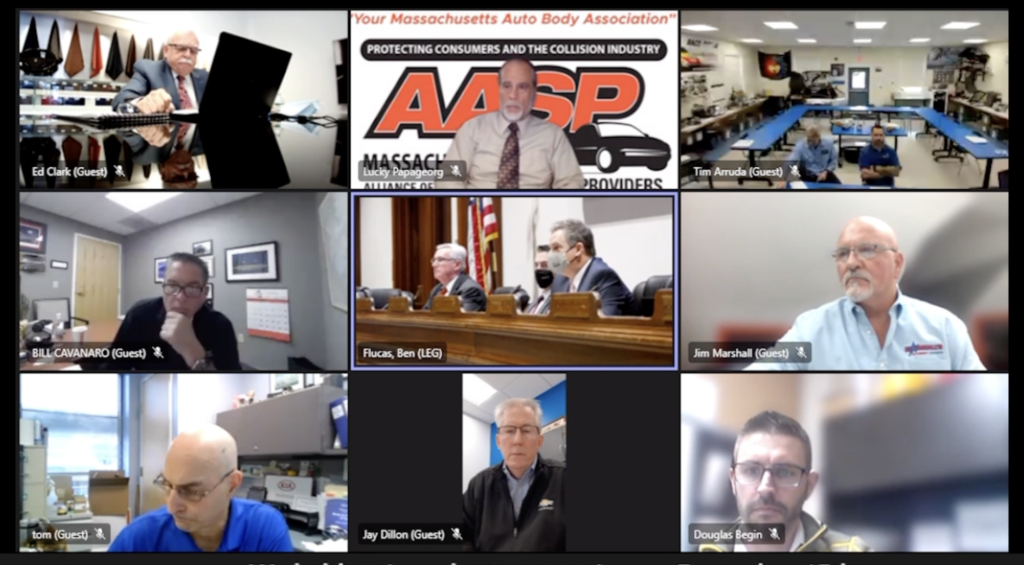 Speakers also pointed out that insurers are willing to pay prevailing labor rates well over $100 to mechanics or for sublet services, and will pay higher rates to collision repair technicians working just over the state line from their shops.

Kathy Andrus, who with her son is running Precision Autocraft, the shop in the Berkshires started by her late husband 43 years ago, told the commission she does not understand why insurers are willing to pay more to shops 10 minutes down the road, in New York and Connecticut.

“I really feel that if you can understand the plight that we’re all in, and do something really quickly before we all disappear, that would be awesome,” Andrus said. “I mean, we have shops closing in our area already. So we have lots of work. We just can’t make it profitable enough to keep our employees happy and bring anyone else in. It’s extremely difficult.”

Donald Dowling, the owner of Marblehead Collision, said his shop has paid $7.2 million to its employees over the past four years, but recouped only $6 million, “due to the inefficient reimbursement rate from the insurance companies.”

Dowling noted that “a mechanic gets roughly $135 [an hour] to replace parts on a vehicle. An auto body shop does the exact same thing, and as you all know, we get $40. Yet, if I bring that car that the insurance company’s paying for to the mechanic, they will pay them that $135, as long as they have an invoice. It’s disgusting.”

“I’ve been on this particular issue since May of 2001,” said Bob O’Koniewski, the executive vice president of the Massachusetts State Auto Dealers Association. “It’s very frustrating, because it’s the same stuff over and over, and especially it’s frustrating from the insurance side of the equation, because it’s almost as if they don’t feel that there’s a problem out there.”

O’Koniewski said he feels that the voice of the consumer has been missing from the discussion, and said he wants to hear about the effect of the industry’s challenges on customer satisfaction.

“We have not had a consumer aspect to this … it has got to be a part of this discussion,” he said.

The commission plans to hold a second virtual hearing. The time and date have not yet been set.

The commission is to report back to the Joint Committee on Financial Services in July.

AASP/MA Legislative Director at-Large Tom Ricci of the Body and Paint Center holds a copy of the report of the 2008 Special Commission on Auto Body Labor Rates, whose recommendations were not followed. (Screen capture via the Massachusetts Legislature’s website)

The recording of the remote hearing held by the Special Commission on Auto Body Labor Rates on Jan. 25, 2022. (Via the Massachusetts Legislature’s website)

Members of the Special Commission on Auto Body Labor Rates hold a remote hearing, the first of two planned. (Screen capture via the Massachusetts Legislature’s website)