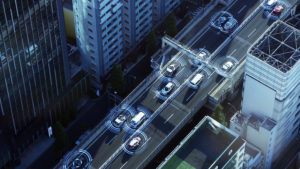 How a future with more AVs on the road should be regulated and prepared for was discussed during a nearly three-and-a-half-hour-long U.S. House Subcommittee on Highways and Transit hearing on Feb. 2. As subcommittee Chairwoman Rep. Eleanor Holmes Norton (D-DC) noted when she opened the hearing, “automated vehicles are on the cusp of transforming our transportation system.”

Ariel Wolf, general counsel to the Autonomous Vehicle Industry Association, said AV technologies have been tested on tens of millions of miles of roads for 12 years and hold a “remarkable safety record.” Association members include Argo AI, Aurora, Cruise, Embark, Ford, Kodiak, Lyft, Motional, Navya, Nuro, TuSimple, Uber, Volvo Cars, Waymo, and Zoox, according to AVIA’s website. Without citing specific studies or AV data, he made a comparison to how AVs are safer than human drivers with recently released National Highway Traffic Safety Administration’s motor vehicle traffic crash fatality data for the first nine months of 2021 during which there were an estimated 31,720 deaths. NHTSA reported that’s a 12% increase over the same time period in 2020.

“The record is clear – autonomous vehicles are being developed safely and they will make our roads safer,” Wolf said.

Aurora Vice President of Safety Nat Beuse asked Congress and the Biden administration, on behalf of the company, to ensure AV laws and regulations are “technology and business model neutral.” He said Aurora also wants Congress to ensure that any commissioned research about the job-related impacts of AVs is driven by “actual industry experience” with the technology and that job quality be central to any policy and industry conversation.

Cathy Chase, president of Advocates for Highway and Auto Safety (known as Advocates), argued that automated or driverless technology is yet to be fully developed. “Its safety and numerous other impacts are currently unknown,” she said.

Advocates is deeply concerned about the rush to deploy “undertested, unproven, and unsafe” semi- or fully autonomous vehicles for which the group has been urging adoption of federal standards for nearly 10 years, she said. Chase pointed out that there has been confusion among drivers about the capabilities of driverless vehicles versus vehicles that have adaptive cruise control with lane keep assist.

“This had led to drivers misusing and over-relying on some technologies, which have resulted in fatalities and injuries,” she said. “… We support rigorous testing, government oversight, and industry accountability with the future goal of safe deployment of AVs, including autonomous trucks and buses.”

University of Oregon Urbanism Next Center Director Nico Larco said Congress shouldn’t focus only on AV safety, efficiency, and technology. The center’s research indicates AVs could have positive and negative “widespread cascading impacts on communities,” he said. The positives are an 80-90% drop in parking demand freeing up reuse of parking lots for housing, offices, shops, and services as well as improvements in transit frequency and coverage. Negatives he listed include increases in congestion on local streets, large impacts on transit labor, riders not using transits because of AV mistrust; decrease in government revenues from fuel taxes, vehicle registrations, licensing, parking fees and traffic citations, and longer distances traveled in less time will increase land consumption. AV transportation could also prove so costly that only the wealthy are able to benefit from it, he said.

Larco recommended Congress fund pilots in cities of all sizes and rural communities specifically focused on the “cascading impacts” he outlined, support research on the impacts, assist local governments and states with regulatory preparedness and organize and lead a national dialogue on AV impacts and community needs.

The city’s first pilot was with a self-driving shuttle at Texas Southern University. On-road pilots with AV buses are underway now between two universities, she said. Castex-Tatum’s district, District K, was one of the first three areas in Houston where Nuro launched zero-occupant AVs to deliver groceries, prescriptions, and hot food to homes, which she said was especially helpful amid the COVID-19 pandemic.

The National League of Cities recommends Congress invest in AV pilots with local governments and to ensure a skilled, trained workforce for quality jobs with higher earning potential and share planning and technology among regions to anticipate, adapt and accommodate for changes as the basis of good transportation planning.

Iowa Department of Transportation Director Scott Marler, on behalf of the American Association of State Highway and Transportation Officials (AASTO), said connected and automated vehicles (CAVs) will have “critical importance” on improving safety, equity, and sustainability of the U.S. transportation system. For the successful deployment of CAV technologies, a national strategy and vision for automated transportation must be developed and collaborative partnerships fostered with cross-sector dialogue, he said.

Transport Workers Union of America International President John Samuelsen said the subcommittee’s leadership in crafting AV legislation is essential for the House to advance “an AV proposal centered on the safety and economic security of all road users.” The union represents more than 150,000 passenger and freight transportation workers.

“Ensuring safety, protecting transport workers’ jobs and rights, and prioritizing investment in our transportation network are all core to this committee’s work,” he said, adding that AVs should be held to the same vehicle safety standards that are currently in place.

AV legislation should elevate workers’ voices when it comes to the development and implementation of new technologies and ensure any transition to AVs creates and sustains good union jobs, Samuelsen said. Also, he said, the federal Department of Transportation should be reformed to create a unified approach to automation regulation across all of its modal agencies to ensure workers are supported as new technologies arrive.

Doug Bloch, political director for Teamsters Joint Council 7, said AV impacts on workers are still unknown and Congress can help mitigate the impacts. The council represents more than 100,000 members of 20 unions located in 48 counties of Northern California and the Central Valley and 14 Northern Nevada counties.

“A future that includes partial and fully autonomous vehicles will change the nature of work in nearly every part of the transportation industry,” he said. “Congress will play a key role in determining whether these changes will be for the better or worse. I’m afraid that if we let large corporations write the rules themselves then it will surely be the latter.”

He added that the issues facing commercial AVs are different and potentially more dangerous than personal AVs and warrant their own “separate and careful consideration.” In general, humans should be in AVs to serve as a safety net for malfunctions, Bloch said.

Later in the hearing, Rep. Eddie Bernice Johnson said Congress should enact policies aimed at mitigating both job losses and any potential wage decreases. She urged the AV industry to invest in high-quality job creation for workers that may be displaced.

Rep. Peter DeFazio (D-OR 04) said AV regulations shouldn’t be done state by state, but rather federally. Previous discussion in Congress has been mostly about AV technology and the vehicles themselves with little discussion on whether current infrastructure is suitable and what measures should be implemented if it isn’t, he said.

In response, Beuse said a couple ways to help with AV deployment would be to improve road striping and make sure road signs are where they should be. Chase said lines of sight and signs can be improved, but Congress should also make sure testing is conducted to ensure AVs can see correctly. Marler noted that digital infrastructure such as communications, data standards, and digital mapping is just as important as signs and pavement improvements.

Ranking Member Rep. Rodney Davis (R-IL 13) said AVs could transform the automotive, trucking, and transit industries as well as the nation as a whole by increasing mobility for disabled and elderly individuals and providing solutions to supply chain bottlenecks. However, worker training needs to take place to prepare for future decreases in professional driving jobs, he said.

Rep. John Garamendi (D-CA 03) said Congress needs to immediately make sure information on all AV accidents as well as the vehicles’ technology is readily available. A public comment period ended Jan. 28 on NHTSA’s Standing General Order to collect incident reports for certain crashes involving automated driving systems (ADS) and Level 2 advanced driver assistance systems (ADAS). Reports involving vehicles with the more advanced SAE Levels 3-5 of vehicle autonomy must have been engaged during or less than 30 seconds prior to the collision.

Rep. Jake Auchincloss (D-MA 04) said he wanted to see the property and casualty insurance industry at the table for AV discussions.

“They’re on the hook for a lot of the safety considerations financially,” he said. “They’ve got tremendous data, sometimes over the course of 100 years, and at population scale about what kind of behaviors make for safe driving, what kinds of infrastructure and semiotics make for safe driving and they really need to be part of this conversation.”