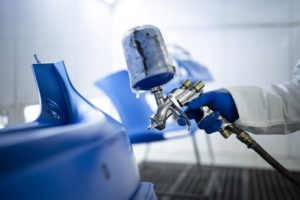 Research by PPG has found that the use of some metallic finishes on repainted bumper covers can interfere with the operation of radar units located behind them, according to the company’s global products and segments director.

PPG’s research, conducted in partnership with a number of OEMs to calculate the impact of dozens of colors on repainted bumpers, found that while the majority of colors do not affect advanced driver assistance systems (ADAS) functionality, “a handful of metallic finishes did pose an issue,” Nick Tullett said in the Feb. 7 issue of Coatings World magazine.

“At certain concentrations, the aluminum pigments used in metallic paints can reduce the transmission of RADAR signals and may interfere with the operation of the ADAS,” Tullett reported. He did not mention specific finishes.

One possible solution, he said, is to replace the aluminum particles with alternatives that do not interfere with the transmission of radar waves. These finishes, he said, are a good match to the vehicle’s original finish, and allow the ADAS systems to function as designed.

Tullett predicted that the impact of metallic finishes will be “an increasing industry-wide issue,” with 85 percent of all new cars expected to be equipped with radar by 2025. According to PPG’s sources, one in four new cars has a metallic finish.

Radar is a key component in most automakers’ crash-avoidance systems, and is considered indispensable for semi-autonomous and, perhaps eventually, fully autonomous driving.

Tullett said the metallic finish issue points up the need for the development of technical standards for coatings performance and measurements as more and increasingly complex ADAS-equipped vehicles take to the roads.

“A technical standard developed by one or more organizations (i.e., carmakers, trade associations, paint and coatings suppliers, or regulatory bodies) addressing the acceptable loss of RADAR transmission following a collision will be necessary for worldwide use as the ADAS market swells,” he said.

In addition, he said, OEMs and paint and coatings suppliers ” will need to take a greater role in setting the direction for repairs, with guidelines, technical and service bulletins, training and tutorials, to ensure drivers remain safe.” “It will be critical for collision repair technicians to receive proper training on ADAS from identifying ADAS in vehicles (it’s hard to detect visually) and recalibrating ADAS sensors to understanding the impact of new layers of certain metallic finishes in the repair process,” he said.

One such training initiative is PPG’s own Knowledge College, an online learning management system.

Some OEMs have already addressed the role that paint thickness can play in the operation of ADAS radar and sonar sensors, with a variety of directions for the repairer.

General Motors, for instance, prohibits the use of all “aftermarket, reconditioned, or salvage” bumper fascias” on ADAS-equipped vehicles, and limits painting to topcoat refinish only.

GM states that “topcoat refinish material thickness of repaired ADAS Bumper Fascia systems must not exceed 13 mils in thickness. Any repairs such as gouges, tears or damage that requires the use of substrate repair material or reinforcement tapes must be avoided.”

According to Volkswagen’s official erWin repair procedures, bumper fascia paint thickness can’t exceed 150 micrometers (about 5.91 mils) around lane change assistance control modules. No plastic repair or smoothing work within at least a 25-centimeter diameter with the module in the center, and spot repair of the fascia directly above the module is forbidden.

“Triple painting” is not allowed, and repairers are instructed to check the customer’s bumper cover to see if it was already repaired once.

Ford has its own approach to the repair of bumper covers on ADAS-equipped vehicles. According to the company’s June 2021 position statement, “Repair of bumper fascias using fillers, reinforcement tape, hot staples or plastic welding can adversely affect ADAS operation. For this reason, Ford Motor Company is limiting repairs on front and rear bumper fascias on all Ford Motor Company vehicles equipped with any ADAS features to topcoat refinish only. Topcoat finish cannot exceed 12 mils (300 microns) in total thickness. Any bumper fascia damage that requires substrate repairs must be replaced.”

Ford prohibits the use of reconditioned, refurbished or salvage bumper fascias, which “may have been repaired using substrate repairs, including the use of filler material, plastic welding and hot staples, which can interfere with ADAS operation.” 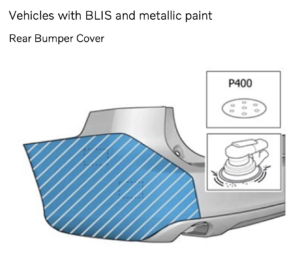 Volvo specifically addresses the issue of metallic paint on vehicles equipped with its BLIS, or Blind Spot Information System, technology.

“Since metallic particles in car paint can deflect and/or distort radar beam energy transmitted through painted bumpers, it is important to minimize the total thickness of metallic paint by removing the old damaged coating before applying any new layers,” the company said in a recent position statement. The paint used must be approved within the established collaboration Paint Information Aftersales (PIA), Volvo said, in order to “ensure the right quality level.”

Another area of concern is the relationship between vehicle color and lidar operation. Lidar, which stands for “light detection and ranging,” works by firing a beam of laser light at an object, and then capturing the reflection of that beam.

Dark colors tend to be difficult for lidar units to detect, because they absorb light, Daniel Ferris, a scientist with BASF’s OEM Coatings division, said during a Collision Industry Conference presentation in November. The culprit is carbon black, a common ingredient in paint mixtures.

One possible solution BASF is exploring, Ferris said, is the substitution of “organic black” materials that absorb visible light, but reflect infrared light. While “your eye detects them as being a nice shade of black,” they return 80 to 90 percent of a lidar unit’s laser beam.

In the Coatings World article, Tullett notes that radar units and other ADAS components are often located in “in peripheral, easy-to-damage car parts like windshields and bumpers.”

Initially, he said, OEMs required repairers to always “replace damaged bumpers instead of repairing them,” but this “proved costly and received significant pushback from car insurance companies.”

Consequently, he said, paint companies have worked with OEMs to find “a more cost-effective and environmentally responsible solution” that allows the bumper cover to be repaired in certain circumstances.

Greater collaboration between paint suppliers and OEMs, Tullett said, will benefit the advancement of next-generation ADAS technologies. Currently, PPG works with vehicle manufacturers on colors in the preliminary research stage, rather than after final approvals, to gauge the effect of finishes on ADAS functionality.

“As a result, automakers are even looking five years out when choosing color styles to stay ahead of the emerging mobility trends and the increasing production of electric vehicles,” he said.

GM: No repairs, aftermarket copies on bumper covers with ADAS

Featured image: A layer of metallic paint is applied to a vehicle bumper in a spray booth. (Smederevac/iStock)

This graphic shows a variety of ADAS sensors deployed around a vehicle, including radar and sonar units mounted behind the bumper covers. (Provided by Safelite)

Volvo instructs repairers to grind away metallic paint before refinishing the bumper covers on BLIS-equipped vehicles. (Provided by Volvo)