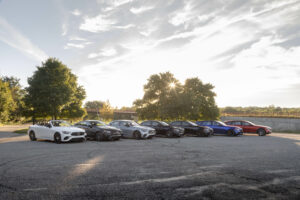 More than 126,400 Mercedes-Benz vehicles, model years 2018-2021, have been recalled due to a software error that causes rearview cameras not to function. While the National Highway Traffic Safety Administration (NHTSA) says only eight vehicles in the U.S. were reported as having the issue from December 2018 to August 2021, recall documents don’t reveal if there have been any more recent reports.

Recalled models include CLA-Class, GLE/GLS-Class, A-Class, C-Class, E-Class, E-Class Coupe and Convertible, GLA/GLB-Class, GLC-Class, CLS-Class, and EQC-Class. All specific models are listed at the link above.

According to the NHTSA, the rearview display will either continue to show the same image, or the screen will be black with a message indicating the interoperability of the camera system. There are no warnings of the issue before it occurs.

“A rearview camera image that might not be available within 2.0 seconds (as required by FMVSS 111 S5.5.3) as the vehicle begins to back up might impair
rear visibility which might increase the risk of a crash,” the NHTSA recall report states.

The cause is due to “a deviation in the development process of the supplier [and/or] the software for the rearview camera might not meet current production specifications.” Mercedes states in the NHTSA recall documents that they no longer use the same software supplier, which “ensures that this issue can no
longer occur from May 26, 2021 onwards.”

Vehicle owners, or repairers who think they might have any of the affected models in their shop, can visit nhtsa.gov/recalls and use the vehicle year, make and model, or VIN to see if it’s on the recall list. VIN lookup is also available at mbusa.com/en/recall. Owners may also contact Mercedes-Benz USA customer service at 1-800-367-6372.

The fix for the glitch is an update to the rearview camera software, which will be available to vehicle owners at Mercedes dealers for free. Dealers should already be aware of the recall as Mercedes says they planned to notify them by April 15. Owner notification letters are expected to be mailed by June 7.

Initial investigations of the glitch were launched by Mercedes in November 2018 based on individual field reports regarding vans in which customers said their camera systems weren’t working properly. “For this purpose, parts of affected MB Van vehicles were retrieved from the field and sent to the supplier for analysis. In parallel, the supplier started the development of a more robust software version. This new software was also made available in Passenger Cars series production from October 2019 onward. A further software release with additional improvements was released by the supplier and made available for series production beginning June 2020,” the recall report states.

“Continuous market observation” in 2020 indicated the issue may also be affecting passenger cars, so systematic testing was conducted.

“While the subject issue could not be systematically reproduced, it was found that in isolated cases, vehicles that had received the original software version showed the subject condition outlined above. In spring 2021, the ongoing testing indicated that vehicles that had received the first improved software version during production, might be affected by the subject condition outlined above. …In late 2021, MBAG could not exclude the possibility that a deviation might be present in the passenger car rearview image software. Subsequently, MBAG determined the potentially affected vehicles in the field. In the beginning of 2022, detailed evaluations were performed to assess the extent to which the deviation might impact the specific regulatory requirements of the affected countries.”

Mercedes decided on April 1 to issue a recall. Mercedes hasn’t received any reports of crashes, injuries, or property damage associated with this issue.

Three other OEMs are also facing software problems: Toyota, Lexus, and Mazda. The Toyota and Lexus software errors can cause the Vehicle Stability Control system (VSC) not to default to “on” the next time the car is started “under certain circumstances.” Bleeping Computer reported that owners of Mazda model year 2014-2017 vehicles in Seattle have reported that “their HD radio receivers crashed when connecting to a local radio station.”

Featured image: 2021 Mercedes-Benz E-Class Family. The 2019-2021 E450 Cabriolet, Coupe, and Wagon models as well as several other Mercedes models have been recalled due to a software error. (Photo provided by Mercedes-Benz USA)