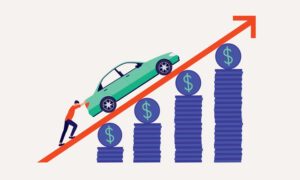 State Farm has moved to raise its auto insurance premiums in Illinois by 3%, just two weeks after a 5% increase took effect, Crain’s Chicago Business has reported.

According to filings with the Illinois Department of Insurance, the average premium will increase by $60 a year with the two rate increases, Crain’s said. The 3% increase takes effect June 13.

Like other carriers, State Farm, the largest auto insurance provider in its home state, is rapidly raising rates in response to higher claims costs.

“Auto claim costs are increasing in part due to a rise in the cost of labor, materials and supply chain-related issues,” spokeswoman Angie Harrier told Crain’s in an email. “State Farm isn’t immune to some of these industry trends.”

As Berkshire Hathaway chair and CEO Warren Buffett recently noted, State Farm is not a publicly-traded company, but a mutual insurer, technically owned by its policyholders. As such, it has no shareholders and doesn’t face the same profitability pressures.

Crain’s noted that State Farm has been slower than competitors like Allstate, Progressive, and Berkshire Hathaway’s GEICO. Still, the carrier has filed for increases of more than 8% since the start of the year.

“State Farm auto rates in Illinois still remain below pre-COVID-19 levels with this latest rate adjustment,” Harrier told Crain’s. “We are continuously monitoring and adjusting to trends to make sure we’re accurately matching price to risk. Our approach is to make incremental adjustments based on driving behaviors to help minimize the impact to customers.”

The carrier recently came in for some criticism from the Consumer Federation of America, which found that it and other major insurers were paying their chief executives “massive” salaries while seeking rate increases.

“While Americans struggle to pay higher insurance premiums and deal with two years of pandemic challenges, insurance executives have taken corporate excess to a new level,” Douglas Heller, Director of Insurance for CFA, said in a statement. “At the same time, they are demanding rate hikes from consumers who are required by law to purchase the product they sell.”

Allstate looking to raise rates throughout 2022; With Q1 results from Chubb, no mention of rates going up